Vivekananda and the Himalayan connection—Part XII 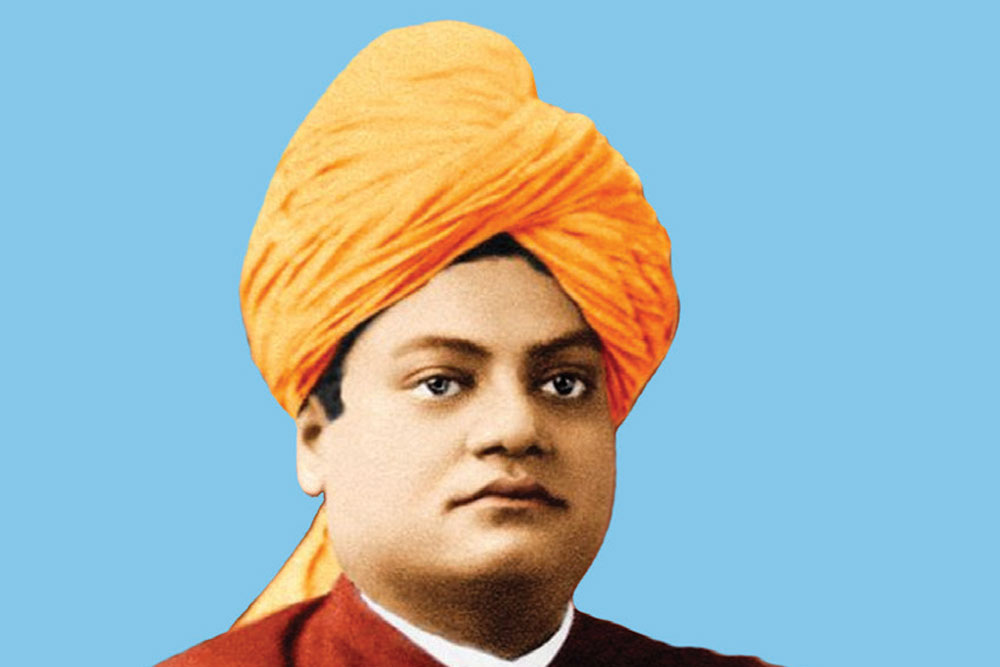 
WHILE SWAMI VIVEKANANDA had an extraordinary experience inside the icy grotto of Amarnath, Sister Nivedita was left alone, with her own feelings of abandonment and confusion. Her high expectations of the transfiguration that awaited her at the pinnacle of her difficult Himalayan journey with her master were truly and comprehensively shattered.

In addition, she reproached her master for denying what she believed was the special bond between them, that of master and disciple. As her master, she expected Vivekananda ‘to carry her to the other side’. She didn’t think he had quite done that. She felt he had not helped her sufficiently. On the other hand, he never treated her as a woman either, paying no heed to her special sensitivities or needs.

Cold, tired and lonely, Nivedita tried to hide her travails from her master, though he must have sensed her suffering and struggle. Vivekananda’s biographers, whether his Eastern and Western Disciples or Swami Nikhilananda, naturally, do not make much of the situation either. As Reba Som puts it in Margot: Sister Nivedita of Swami Vivekananda (New Delhi: Penguin, 2017), Nivedita kept her inner conflicts to herself:

‘Mentioning none of these in her book The Master as I Saw Him, she laid bare her soul in her letter to Mrs Eric Hammond on her return.Swearing her to secrecy and confidentiality, Nivedita confessed how left out she had felt at that moment of spiritual intensity and although “deeply and intensely glad” of the revelation that her guru had experienced, she felt “terrible pain to come face to face with something which is all inwardness to someone you worship, and for yourself to be able to get little further than externals. Swami could have made it live—but he was lost”’ (page 39).

Trying to enter Nivedita’s state of mind, Som offers us an account of what might have happened at Amarnath:

‘Nothing could have prepared Nivedita for the sight of the voluminous cave large enough to hold a cathedral, with a huge iced Shivalingam enthroned as it were on its own base. Vivekananda entered the shrine, naked except for his loin cloth, body smeared in ashes, prostrating himself in adoration and almost swooning with emotion. … Nivedita was the stupefied observer of this scene. Caught in this moment of intensespiritual wonder she felt certain that Swami had also dedicated her to Shiva. But conflicting emotions gripped her’ (ibid).

For Nivedita, the moment would have been opportune for the Guru and disciple to be bound forever in a transforming relationship:

‘She had longed for that moment to be supremely meaningful when he would impart to her, through a touch perhaps, a spiritual knowledge such as his Master had given him. That moment would then have glowed in her memory. Instead, she felt excluded from his defining moment of spiritual realization’ (ibid).

Perhaps, the more appropriate analogy might be with Sri Ramakrishna and the Holy Mother; or some 20 years later, Sri Aurobindo and Mirra Alfassa. While both Sri Ramakrishna and Sri Aurobindo anointed the Holy Mother and Mirra Alfassa respectively as their spiritual partners and successors, Vivekananda did not do so with Nivedita. According to Som:

‘In vain did she plead with him to climb down from the position of Master and realise that “we were nothing more to each other than an ordinary man and woman”. Holding on to his uncompromising reserve, Vivekananda tried valiantly to reason with her, but as she confessed later, she was inconsolable and “angry with him and would not listen to him when he was going to talk”’ (ibid).

Vivekananda’s rejection hurt Nivedita deeply. Was his ‘uncompromising reserve’ an outcome of his fear of deviating, even ever so mildly, from his adamantine vow of chastity? Or was it a consequence of Nivedita’s not yet being ripe for the expected, if not promised, initiation? Som places the responsibility for the lost opportunity on the disciple, rather than the guru:

‘In retrospect she realized with bitterness how wrong she had been and lost a chance that would never come again. What she had perhaps sought was an initiation by Vivekananda at that auspicious moment into the divine knowledge and transcendental experience that he seemed to have received’ (ibid).


Was Vivekananda’s apparent insensitivity ‘his inability to achieve the paramaha••sa’s total indifference to women and hence his personal anxiety about his vulnerability’ as Narasingh Sil claims? Or was the master well aware of how hurt and Nivedita was and tried to make it up to her? Lizelle Reymond, her first biographer and author of The Dedicated: A Biography of Sister Nivedita (New York: Dell, 1953), believes that Vivekananda tried very hard to make it up to Nivedita: ‘he was all kindness and consideration’ to her:

‘He held her hands in sympathy. He looked after her with infinite tenderness, as if she were a tired child. He tried to comfort her, to make her drink some tea thickened with butter. He watched over her until, exhausted by her grief, she fell asleep. And he kept close beside her as they set out in the icy cold the next morning… ’ (page 128).

Nivedita, however, was inconsolable: ‘She kept murmuring, “Why? But why? I don’t understand”’ (ibid).

Vivekananda, quite sympathetic to her plight, ‘suffered with her in deep humility, though he could no longer talk to her’. At the end of day, after marching 10 hours, he found her asking still, ‘“Why?” with tears in her eyes.’ He answered, quite simply, “Margot, I have not the power to give you what you want” (ibid). As she wrote to Nell Hammond afterward, ‘The next morning, as we came home, he said, “Margot, I am not Ramakrishna Paramahamsa”’ (ibid). This extraordinary admission was accompanied by ‘The most perfect, because the most unconscious, humility you ever saw.’ As Reymond puts it, ‘He would have liked to reply, “Peace, peace; the felicity lies only in the gift of oneself.” But Nivedita, shut in by her despair, was incapable of listening to him (ibid, pages 127-128).

Both master and disciple returned to Pahalgam where Mrs Bull and Josephine were waiting for them. The greatly anticipated Amarnath darshan had unfortunately turned out to be destabilising rather than unitive. Though the age gap between them was not even four years, Nivedita began to fashion herself as Vivekananda’s daughter. As Som puts it, ‘Nivedita, in turn, realised with time that Vivekananda who had attracted her initially as ‘King’ had to be viewed instead as the “Master” who guided her and, finally, in the last stage as the ‘Father’ for whom her devotion was complete as a daughter’ (op cit, page 15).

Romain Rolland, too, felt that Vivekananda treated Nivedita in this manner to defend himself from her ‘worshipful passion’ (cited in Tantine: The Life of Josephine MacLeod by Pravrajika Prabuddhaprana, page 216). Rolland believed that Nivedita’s feelings for Swamji ‘had always been one of absolute purity’ but perhaps ‘Vivekananda understood the danger’. Som speculates, ‘Perhaps Nivedita had for Vivekananda a “lover’s adoration” similar to what Madeleine Slade was to have for Gandhi; but the age difference between Gandhi and Miss Slade was thirty years as against the five years between Vivekananda and Nivedita’ (op cit, page 35).

Despite the readjustment that Nivedita tried so hard to effect in both her attitude and approach to Vivekananda, her love for him did not diminish. Even as she relished the privilege of travelling back with him to England, she was writing to Josephine on April 9th, 1899, ‘While he is alive and here, I will not stir out of reach of him—I could not bear it—I worship—idolize—love him—I dare not risk his wanting me and not being there’ (Som op cit, pages 58-59).

The ‘love that she felt for her King’, as Som puts it, was ‘irresistible’ (page 59). As Nivedita wrote to Josephine on June 15th, 1899 during her sea voyage with Vivekananda, ‘Blessed be God for making it possible to love like this’ (Som op cit, page 60). In the same letter, she confessed, ‘that awful time at Almora, when I thought he had put me out of his life contemptuously… I have grown infinitely more personal in my love’ (Som op cit, page 60).

The six weeks together on the ship, albeit also accompanied by Swami Turyananda, was the longest time Nivedita would spend with Vivekananda. They had set sail on June 30th, 1899 on the SS Golconda, via Aden, Port Said and Naples, arriving at Tilsbury Dock, London on July 31, 1899. She considered it ‘as the greatest occasion of my life… I missed no opportunity of the Swami’s society that presented itself… thus I received one long continuous impression of his mind and personality, for which I can never be sufficiently thankful’ (The Master as I Saw Him, pages 220-221).

Those who imagine or claim that Amarnath caused a rupture between Nivedita and Vivekananda or irrevocably changed the former’s personality are, evidently, mistaken. In fact, the Amarnath experience culminated ‘on the great day of Rakhibandhan’, with both Vivekananda’s and Nivedita’s wrists ‘tied with the red and yellow threads of that sacrament’ (ibid, pages 159-160).