Yet it needs Delhi to counter the growth of communist China 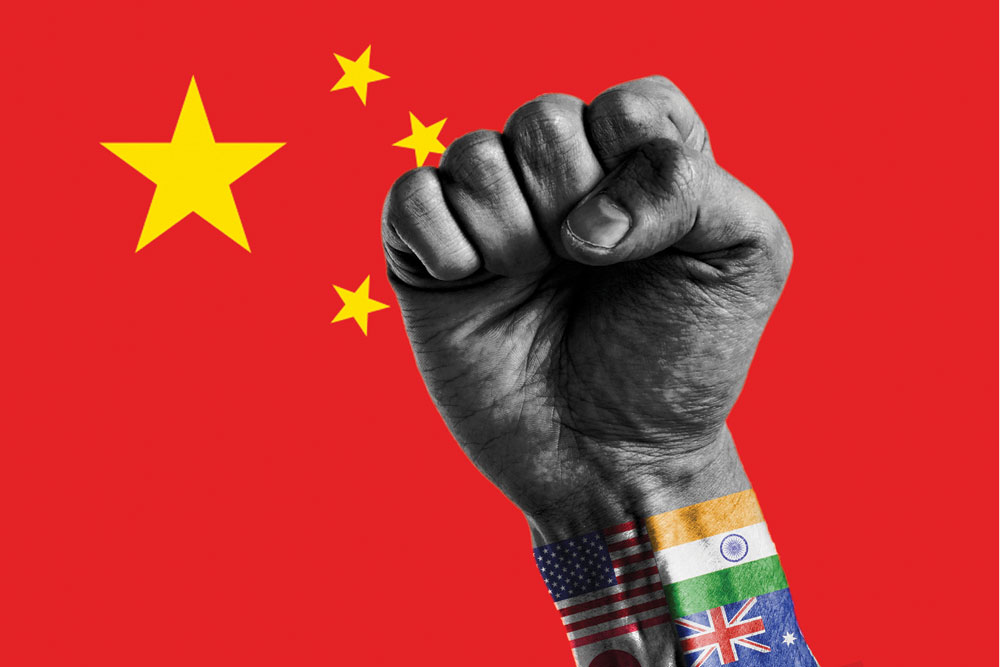 
HAVING PAINSTAKINGLY climbed up the geopolitical ladder for over three centuries, the West doesn’t like interlopers. The G7 represents the old world order. That order is long broken but members of the G7—Britain, the US, France, Canada, Italy, Germany and Japan—cling to the myth that the world turns around them.

The United Nations rapporteurs’ letter to the Government complaining that India’s IT rules for social media platforms are hostile to human rights is especially ironic. The UN is commandeered by the five veto-carrying, permanent members (P5) of the United Nations Security Council (UNSC) —the US, Britain, France, Russia and China—who built their primacy on human rights abuse.

Both the G7 and the P5 of the UNSC reflect a tainted world order. Consider, for example, the record of the seven nations that comprise the G7.

The US built its prosperity on 250 years of African slavery and the usurpation of indigenous peoples’ land in North America. It practised legal racial segregation till as recently as the mid-1960s. Blacks in the US had few human rights and little democracy.

Turn to Britain. It ran 55 per cent of the European transatlantic slave trade to North America. Large fortunes were made in the bustling slave ports of Liverpool, Bristol and Southampton. The human rights of Asians and Africans in British colonies were violated daily. In Australia, 311 cases of massacres of Aborigines by British settlers, several in the 20th century, have been officially documented.

France, the world’s seventh largest economy, behind India (sixth), fought brutal colonial wars in Algeria and Indo-China into the 1950s, well after a new world order had been established, comprising Western-led security and financial institutions: the veto-carrying UNSC, the International Monetary Fund and the World Bank.

Canada, for all its inclusive rhetoric, is essentially a breakaway ex-colony of British loyalists who refused to join American revolutionaries in their war of independence, but was an active partner with the newly formed US in evicting indigenous people from vast tracts of land they had lived on for centuries.

Germany and Italy’s fascist track record in World War II does not bear retelling. The seventh member of the G7, Japan, is the token non-white inclusion in this hoary club on account of its large economy, not its ruthless assault on East Asia as an ally of Germany in World War II.


India, a diverse, noisy, still-poor democracy, is different from everything the West has encountered since it constructed the current world order after World War II

All this is history. But in contemporary terms as well, the US, Britain and France have helped Saudi Arabia and the United Arab Emirates in their relentless air strikes on Yemen since March 2015, killing tens of thousands of civilians, including women and children. Old habits die hard.

India presents an awkward problem for the West. Rising China can be excoriated for its totalitarianism. But India, a diverse, noisy, still-poor democracy, is different from everything the West has encountered since it constructed the current world order after World War II.

Think-tanks like Chatham House in Britain and the Heritage Foundation in the US know from detailed projections that India will be the world’s third largest economy in the next 10 years, give or take a year or two. The post-pandemic growth trajectory of India is irreversible, whichever political coalition is in office.

Western leaders have always been wary of a rising India: Asian, democratic and diverse. Its rise, without resorting to colonial plunder, centuries-long African slavery and genocide of indigenous people, unsettles them.

This is especially awkward for the West at this point because it needs India to counter the rise of communist China as the world’s largest economy by 2030, possibly earlier. After spending seven decades fighting the paranoia of a potential domino effect of Soviet communism spreading in Indo-China and elsewhere, the West is now confronted with the prospect of communist China dominating global economic, technological and—over time—military power.

The West looked upon India as an unreliable, Nehruvian nose-in-the-air, non-aligned, left-leaning partner after Independence. It, therefore, gravitated towards Pakistan, the geostrategic gun-on-hire.

The rise of China has poured cold water over Western heads. The West needs India to help police the Indo-Pacific. It grudgingly accepts that India’s consumer market will be the largest in the world in the next two decades, ahead of even China, whose population has begun shrinking and ageing.

The changing balance of global power and the impending loss of its hegemony unnerve the West and undermine its history.