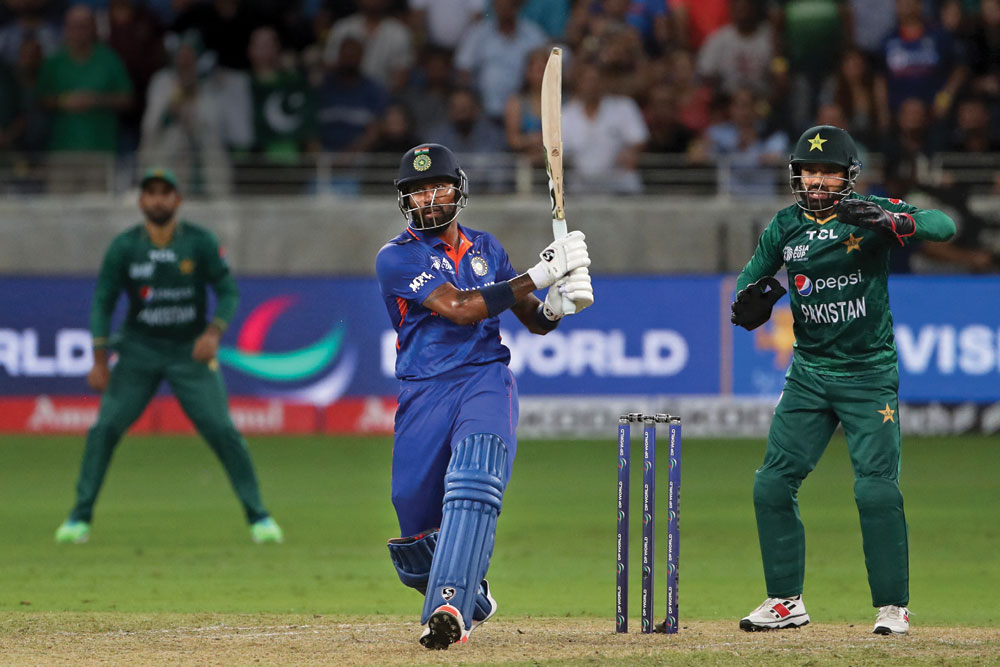 
IT WAS TWO HOURS after the India-Pakistan match had ended on June 16, 2019 in the World Cup and the curry mile in Manchester was a sight to behold. One side of the road was dark and all the Pakistani restaurants bore a deserted look. On the other side, every Indian restaurant was full and every possible dance form conceivable was on. People were dancing to the dhol and the bhangra was impromptu and full of energy. The Tricolour was everywhere and the party had just begun. India had yet again beaten Pakistan in a World Cup encounter and yet again it was a one-sided contest.

For the contest to retain its charm, we needed a better Pakistan. The cricket world needed a Pakistan which was not a pushover and one that could stand up and compete. The Champions Trophy final in 2017 was an aberration and till 2019 at least India was a far superior side. In fact, every Pakistani former cricketer and journalist on the eve of the 2019 match agreed that India started as overwhelming favourites and it would be a real surprise if Pakistan managed to beat Virat Kohli and his team. That’s not what this rivalry needed. Unless there is competition, there is no rivalry. Fans, after a point, would not want to watch one-sided matches and would start to take things for granted. The India-Pakistan contest, for some years, had been turning into an overhyped spectacle which the cricket world could live without.

Finally, things changed in 2021 in Dubai. A resurgent Pakistan led by Babar Azam and Shaheen Shah Afridi tore into an undercooked India and made a real statement. Mohammad Rizwan at the top with Babar was all of a sudden a force to reckon with and we had a contest on our hands. Something that could truly be labelled as the world’s foremost cricketing rivalry. With Babar, Rizwan and someone like Asif Ali in the middle order, Pakistan now has real meat in batting. And while Shaheen will be sorely missed in the Asia Cup, more than Jasprit Bumrah one can say, Naseem Shah, Haris Rauf, and the others have shown a rich vein of form of late.

Even in the clash on August 28, Pakistan was valiant in defending 148. They managed to push India back at the top and had it not been for the individual brilliance of Hardik Pandya, the match could have gone their way. The way young Naseem Shah bowled despite suffering from serious cramps was testament to the intensity and commitment in this Pakistan team. Even when he wasn’t able to stand straight, he ran in hard and bowled at 140 kmph and even picked the wicket of Suryakumar Yadav. He almost had Ravindra Jadeja and was denied by the Decision Review System (DRS). Even Mohammad Nawaz was fearless in the manner he bowled the last over. Not only did he get Jadeja, he also managed to take the match to the wire with just two balls left. An edge-of-the-seat battle is what we witnessed and that’s what this rivalry needs.

The question is: Can Pakistan sustain this intensity? The players need handholding and evidently Babar Azam has been able to do the job superbly. While Babar did not start too well as captain, with time he has found his mojo and is now one of the best in the world as batter and skipper. His batting form has helped his captaincy and the poor start at the helm is now a thing of the past. In Rizwan, who is an absolute livewire on the field, Babar has found an able opening partner who complements the captain well. While Babar is calm and composed, Rizwan is the exact opposite. He is forever jumping around, adding to the pulse of the contest.
For the record, Pakistan had started poorly in 1992 as well. They were almost on the verge of elimination in the World Cup before Imran Khan, supported by the brilliance of Wasim Akram and a young Inzamam-ul-Haq, brought them back and went on to win the tournament. The truth is Babar is growing in stature and could, in future, command the same respect that Imran did as a player. His form across formats is evidence of how good he is as a player and it is inevitable that he will command respect in the dressing room. He is now the leader that Pakistan wanted, and things will only get better for him.


For the contest to retain its charm, we needed a better Pakistan. The cricket world needed a Pakistan which was not a pushover and one that could stand up and compete. It is because sport and politics always get mixed up in the subcontinent that India-Pakistan is still the contest it is

While there is no definitive answer to this question just yet, suffice to say the evidence conclusively proves the adage that sport and politics don’t mix wrong. It is because sport and politics always get mixed up in the subcontinent that India-Pakistan is still the contest it is. People watch it because there is something more than cricket attached to the contest. While cricket is the centrepiece, the extraneous factors attached to it make victory in this contest a big deal. The last game in Dubai is a perfect case study. Days and weeks before the match, tickets were sold out and there was a concurrent viewership of 200,000-plus for the pre-show on Disney Star, the host broadcaster. The match was watched by millions and the scenes in the stadium added to the spectacle. It was no different from Manchester United vs Liverpool, or Manchester City vs Arsenal. It is cricket’s equivalent of a Federer vs Nadal and a strong Pakistan will only add weight to it. What was also good to see was the way the players’ dealt with the intensity. Be it Hardik Patel giving Rizwan a hug or Jadeja apologising to Rauf when he had bumped into him while trying to take a single, the game was played in perfect spirit. The cliché, “cricket was the winner in the end” actually rang true in Dubai, adding to the rivalry.

With another India-Pakistan contest on September 4 and then the marquee T-20 World Cup clash in Melbourne on October 23, fans won’t be starved of seeing these two teams face off in the near future. There will be opportunities for a team that loses a contest to avenge it, and that’s what will keep the fan banter going. Cricket needs this rivalry and it seems things are well and truly back on track.