A Requiem for My Boss 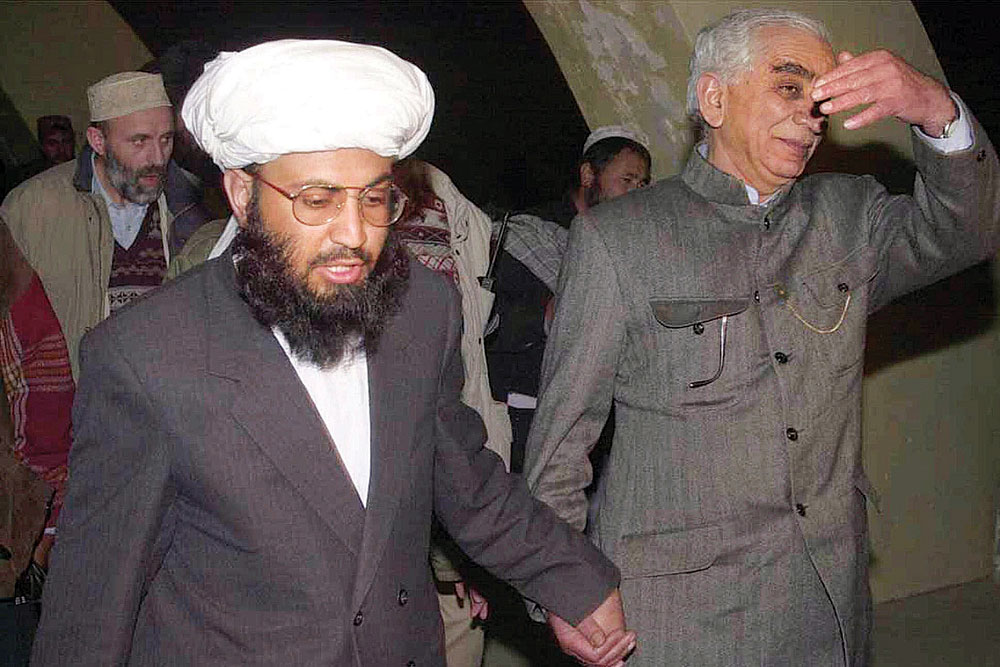 
MEMORIES AND EVENTS jostle for space when I think about Jaswant Singh. I joined his office in early 2000—soon after his return from Kandahar and the IC-814 hijacking, and left about three years later, in early 2003, to take up my posting in Islamabad. During this time, Jaswant Singh was External Affairs Minister, holding charge concurrently as Defence Minister for some time and, from mid-2002, he was Finance Minister. After 2003, Jaswant Singh’s role, for me, shifted from that of an immediate boss to one of mentor, guide and friend. I was in regular touch, witnessed his fortitude through different downswings and always marvelled at the exemplary standards he set for himself and all those who came in contact with him.

More than his portfolios and his many achievements in public life, the memories that most endure are of his varied interests, his deep sense of service, his fierce loyalties and, most of all, of a highly cerebral and sophisticated mind. Much of the latter came from a self-imposed regimen of reading and learning. I remember a letter he had once received seeking some early background details on his schooling. He scored out on the draft reply a sentence that began ‘I was educated at Mayo’, and substituted it with ‘I was schooled at Mayo, I educated myself’!

He had an insatiable appetite for books on many subjects. Biography and military history would possibly top the list. But there was alongside a great interest in the peripheral and tangential. On hearing that Munshi Devi Prasad of Jodhpur, a long forgotten historian, had in the late 19th century penned a biography of the Mughal noble Bairam Khan, he was determined that it be republished. A copy was finally located in the British Library in London and thereafter republished with an introduction by Jaswant Singh. He had numerous other books to his credit and the lesser known ones tell you a great deal about how he had prepared himself for high office. A 2006 book comes most to mind in this regard—Travels in Transoxiana. This was, in the main, a diary he had kept as a young MP while travelling across Central Asia. In the Ministry of External Affairs (MEA), he would often surprise many by drawing on this vast store of accumulated knowledge—possible only for someone who had thought long and deeply about India’s external policies.

But there were other interests apart from books. Perhaps the love for horses came from his early years in rural Jodhpur and then his background as a cavalry officer. If official events intruded upon weekend afternoons—which they very frequently did—his personal staff would be subjected to a barrage of sarcasm about sadists who fixed meetings in such a way that a polo match was missed! He would frequently ride himself—usually at the crack of dawn. But his was very much an educated patrician’s interest—because reading about horses was as important as riding them.


Yet, for all this, he remained an earthy and grounded figure. I remember clearly his frequent warnings that ‘governments do not understand the implications of their intervention’, and he would often speak about the vast disconnect between the metropolis and the village, the city and the countryside. In the late 1970s and early 1980s, he used to write a column broadly along these lines in The Indian Express called ‘District Diary’. This was published as a book in 2001 with the same name and remains a record of a thinking person’s reflections on the issues that emerged from the massive urbanisation that was already engulfing us.

In the MEA, he had a big-picture view of India in the world. This translated into a set of specific agenda points—strengthen relations with the US, invest in the relationship with China and Russia, do not let relations with Pakistan get too deeply into a rut, cultivate the Gulf states and Iran, regain our sense of Central Asia, assert India’s maritime interests, India’s history was an asset in its present engagement with the world, etcetera. This big-picture view of the world was, I believe, what enabled him to think outside the box and to lead rather than be guided by precedent. In my reading, our policy gave the best outcomes with the US. Here, a great deal of credit must devolve on Jaswant Singh for bringing the Democrats around post-May 1998 and, further, building on that momentum with a Republican administration following George W Bush’s election in late 2000. When a full history of India’s engagement with Afghanistan in this century is written, his role, beginning with the Bonn process, will emerge with clarity.

ON THE OTHER hand, the greatest frustration came from Pakistan. He was in the front seat of the well-known roller coaster—the Lahore Summit, Kargil, IC-814, the Agra Summit, the attack on Parliament and Operation Parakram. He missed the grand finale of the NDA’s Pakistan policy that took place in Islamabad in January 2004 because he was then Finance Minister. But in the rest of the sequence, he was quite literally at the centre of things. He received the most criticism for IC-814 and the terrorist handover and, to some extent, for the Agra Summit as well. I think both sets of criticism will be tempered by a more even-handed reading of history in future. In Kandahar, he took the bullet on behalf of the Government for what was clearly an impossible situation. In Agra, he was confronted with the depths of Pakistani irredentism as equally by the depths of its insecurity and mistrust that it could not take a good deal when offered one. But his basic approach was fundamentally sound and despite the repeated letdowns and consequential breakdowns in Pakistan policy, Jaswant Singh showed no rancour or bitterness but a pronounced and profound realism. Some of this realism was informed by realpolitik. I recall once, after a long conversation with then US Secretary of State Colin Powell, he wondered whether he should be spending so much time discussing Indo-Pak relations with others rather than India’s relations with them. This loud thinking was, I realise, reflective of the clarity in his mind that efforts to establish some kind of stabilising diplomatic process with Pakistan must be persevered with, no matter what the provocation was. The realism was also informed, however, by a deep reading of subcontinental history in the 20th century. There is a sentence in the final pages in his book on Jinnah that begins: ‘There are now no more points to score; all have already been scored….’ The sentence is about 1947 and Partition. But for Jaswant Singh, this was a thought-out general position. During my years in Pakistan, his advice always was that the point was not to win arguments, or establish rhetorical points, but to reach agreements. In his autobiography, he also wrote candidly about the pressures of being foreign minister in the aftermath of the attack on Parliament and these bear repetition today when neither has the threat receded nor the onus on us to make diplomacy our principal instrument, both of defence and offence.

Jaswant Singh’s basic approach was fundamentally sound and despite the repeated letdowns and consequential breakdowns in Pakistan policy, he showed no rancour or bitterness but a profound realism

‘…I faced two, really three, challenges. The internal was the most taxing, for it involved carrying conviction with colleagues. This sapped my internal resolve and resources. An adjunct of this was to carry the three service chiefs with me, also convincingly, and to get them to recognize ‘restraint’ [in that context] as a strategic asset, for avoiding conflict…There was then the external challenge. I had to carry conviction with and thus carry the opinion of the international community. At the same time, India had to contain Pakistan diplomatically and yet continue to defeat terrorism on the ground. The third challenge was to convey the country’s mood, to contain its belligerence, its desire for revenge and retaliation, but to give it a sense of achievement, of having diplomatically defeated the enemy.’

Jaswant Singh often described the MEA’s vast daily output of telegrams, briefs, notes, position papers, dispatches, etcetera, as a paper factory. But the MEA was exemplary compared to the ministries of defence and finance—their officialese was more pronounced, the files thicker and decision-making infinitely slower. In dealing with the vast domains of these ministries, he would often quote Viceroy Curzon: ‘of a gigantic quagmire or bog, in which every question that comes along either sinks or is sucked down and unless you stick a peg with a label over the spot at which it disappeared, and from time to time go round and dig out the relics, you will never see anything of them again.’

Jaswant Singh made a near fetish about quick disposal, and that papers or files should not remain more than 24 hours in his office. This is a near-impossible standard for a minister’s office and made even more unlikely by his near-compulsive need to polish the language of anything that came his way. Replies to Parliament questions were particular targets and I remember my fingers would itch to snatch away the pen from his hand as he made changes to draft after draft. Yet, for all this, he was very self-contained in parliamentary work. I remember the surprise in the Ministry of Finance when it was announced that the Minister would not require briefings before Question Hour and that in case some factual information was needed, the officer concerned would be called. His long years in Parliament had given him a sense of it and what was needed of him to satisfy members’ questions. “I know my tribe,” was a constant refrain to suggestions that he needed more briefings. But I realise now that this approach was also grounded in a fundamental self-confidence as equally in a healthy scepticism of official explanations, statistics, etcetera.

Jaswant Singh put enormous effort into his speeches, his writings, and most of all, his books. He took great pride in our long tradition of political figures who intervened also in public debates on history, culture, and so on. I think the book on Jinnah was a conscious effort to encourage the examination of contentious aspects of our recent history with an open mind. I also like to think that some part of Jaswant Singh was happy that a book of his should have led to such a dust-up.

(TCA Raghavan is a former Indian High Commissioner to Singapore and Pakistan. He was director of the office of the External Affairs Minister and Finance Minister when Jaswant Singh held those portfolios )

TCA Raghavan
TCA Raghavan is a former Indian high commissioner to Singapore and Pakistan. He is the author of, most recently, History Men: Jadunath Sarkar, GS Sardesai, Raghubir Sinh and Their Quest for India’s Past

The Architecture of Atonement

The End of Inevitability