Behind the story of pure devotion and physical power 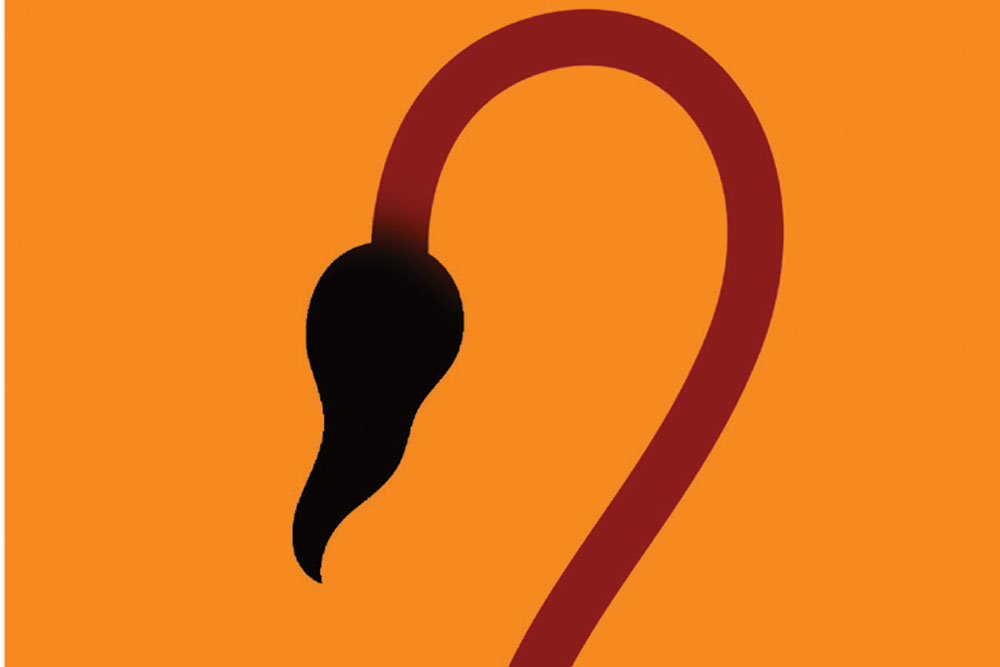 
WHAT IS THE difference between the words “mahat” and “mahan”? The answer depends on the language, and both words mean great, lofty. In Sanskrit, within the confines of grammar, if I search for a meaning of the word “mahan”, I won’t find it. In a sense, there is no such word. The word is actually “mahat”. Such words go through transformations, depending on the case. In the nominative case, when the word in question becomes the subject, “mahat” becomes “mahan”. That’s the reason a dictionary will have no entry for “mahan”. It’s no different for Hanuman. There is no such word, grammatically speaking. The word is actually Hanumat. When I did my translation of Valmiki Ramayana, I used Hanumat and a reviewer castigated me for being unnecessarily pedantic. In hindsight, I think she was right. I think I should have stuck to Hanuman. The word “hanu” means jaw. Everyone possesses a jaw. If a jaw is used to describe Hanuman, there must have been something special about his jaw.

All of us have perceptions about Hanuman and those perceptions are formed by some text we have read, or some story we have been told. Hanuman is a chiranjeevi. Chiranjeevi is not quite immortal. Chiranjeevi is someone who lives for a long time, specifically, till the end of the present mahayuga, the cycle of satya (krita) yuga, treta yuga, dvapara yuga and kali yuga. There are different lists of chiranjeevis. Most lists will feature Ashvatthama, Bali, Vedavyasa, Hanuman, Vibhishana, Kripacharya and Parashurama. In some other lists, the sage Markandeya will also be mentioned. But there is no doubt about Hanuman being a chiranjeevi. Which character features in both the Ramayana and the Mahabharata? The Ramayana incidents occurred in treta yuga, the Mahabharata incidents in dvapara yuga. In response to the question, someone might say Shiva. That’s true, of course. However, logically, a chiranjeevi who features in the Ramayana can feature in the Mahabharata too. Indeed, if you don’t know the Mahabharata really well, you might not know that Vibhishana is mentioned in the Mahabharata too.

But almost everyone will know that Hanuman features in Mahabharata. There is an encounter between Bhima and Hanuman, when Draupadi wants a divine lotus and Bhima goes off, in search of it. On his way to Mount Gandhamadana, he finds Hanuman asleep along the path. When he asks Hanuman to move and let him pass, Hanuman first asks Bhima to jump over him. He next asks Bhima to move his tail aside and pass past him. Bhima is unable to lift the tail and Hanuman tells him who he is. “I was born in Kesari’s field from Vayu, who gives life to the universe.” The word used is kshetra, best translated as field. Kesari was a chief of the monkeys and was married to Anjana. Thus, Anjana is Kesari’s field, or kshetra. However, Hanuman was the son of Vayu, the wind god, and Anjana, not Kesari and Anjana. Bhima wants to see the form Hanuman used when he leapt across the ocean. I have always found Hanuman’s response most interesting. “Neither you, nor anyone else can see that form of mine. That was in another age that no longer exists. Time was different in krita yuga and it is different in treta and dvapara. This is the time of decay and I no longer possess that form. The earth, rivers, ranges, mountains, siddhas, gods and maharshis must all conform to time and adjust their forms from one yuga to another yuga. Strength, size and power decline, and then increase again.” However, eventually, Hanuman does show Bhima that form. This is one incident from the Mahabharata. In contrast, in Ramayana, Hanuman’s presence is pervasive. The Ramayana is divided into seven kandas. Once we are in Kishkindha kanda, Hanuman is omnipresent. There is no need to repeat Hanuman’s role. Specifically, there is one bit I personally find to be extremely interesting. In Sundara kanda, Hanuman has discovered Sita in Ashoka vana and is wondering how to reveal himself. “In particular, I am a vanara. I can speak the language of humans, such as Sanskrit. But if I speak the language of humans, such as Sanskrit, Sita will think that I am Ravana and will be frightened. I must certainly speak in the language of humans, in words that are full of meaning.” The word used is samskrita, which means cultured and polished. Instead of Sanskrit as we know it today, this may simply mean the polished language of humans. What does he do, so as not to alarm Sita or alert the rakshasis? He sits on a tree and talks about Rama’s exploits, so that Sita can overhear.

Many years ago, I visited Dvaraka and Bet Dvaraka (the island). Once I was there, people told me about the Makaradhvaja temple. I was intrigued and visited it. This was at some distance from the main part of Bet Dvaraka and many years ago, the only way to get there was via a cycle rickshaw. This is a temple to Makaradhvaja, Hanuman’s son. I was puzzled. Hanuman was a brahmachari. How could he have had a son? When he leapt across the ocean, a drop of his sweat fell into the ocean and a fish (or makara) swallowed it. Makaradhvaja was born from this. Unknown to Hanuman, Makaradhvaja grew up. When Hanuman met Makaradhvaja, he was enraged at being told that Makaradhvaja was his son, and so killed him. The priest at the temple told me this story and I was surprised. “Where is this story from?” I asked. “It is from Valmiki Ramayana,” he responded. “I have read Valmiki Ramayana,” I said. “It isn’t there.” “Read the Gita Press version. You will find it,” was his response. On return, I read the Gita Press version of Valmiki Ramayana. Sure enough, the story was there.

As I have said before, we should be careful. Our perceptions are shaped by specific texts we have read, or specific stories we have been told. But there are many texts and many stories. The Valmiki Ramayana isn’t the only version of the Ramayana in Sanskrit and there are non- Sanskrit renderings too. There are non-Sanskrit renderings of Mahabharata and there are many accounts about Hanuman in the Puranas. How many of us know about Mahiravana abducting Rama and Lakshmana and taking them down to the nether regions, from where they are rescued by Hanuman? The story figures in a non-Sanskrit rendering of the Ramayana. Particularly in Purana texts like Skanda Purana and Shiva Purana, there are references to Hanuman. For instance, did you know that Shiva Purana describes Hanuman as Shiva’s avatar? I have said that Hanuman was the son of Anjana and Vayu. In Shiva Purana, Nandishvara (Nandi) tells us, “There was an occasion when Lord Shambhu, the performer of wonderful deeds, saw Vishnu in the form of Mohini. All the qualities resided in her. As if struck by Kama’s arrows, Shambhu was agitated. To accomplish Rama’s task, Ishvara made his semen fall down. The saptarshis placed this semen on a leaf. Affectionately, he urged them mentally that they should accomplish Rama’s task. To accomplish a beneficial act for Rama, those maharshis poured that semen into the ears of Anjani, Gautama’s daughter. At the right time, Shambhu was born through this, under the name of Hanuman. (By the way, Shiva Purana also mentions the Mahiravana story.)

The jaw is still left. When he was a child, Hanuman was hungry. He saw the rising sun. Taking this to be a fruit, he tried to grab it. This enraged Indra, who struck him with the vajra and shattered his jaw. That explains the name Hanuman, someone with a distinctive or disfigured jaw. In some accounts, thereafter, various divinities bestow powers on Hanuman, which he will remember only when he becomes an adult. There are Jataka stories and Jain accounts about Hanuman. There are stories from Southeast Asia, particularly Indonesia, where I have seen performances and murals with Hanuman as a white monkey. There is a belief that the Andaman Islands are named after Hanuman. The monkey king who travelled with Xuanzang was clearly influenced by Hanuman.

Hanuman is not only about stories, he is also about beliefs. In shaping those beliefs, who can deny the importance of Tulsidas and Hanuman Chalisa, even if those beliefs are restricted to some parts of the country? (Strictly speaking, there are 43 verses.) Hanuman represents the epitome of bhakti and shakti combined. It is unadulterated and unqualified bhakti, where Rama and Sita are seated within the heart. Unadulterated and unqualified bhakti are difficult to achieve, regardless of the divinity one is worshipping. Without bhakti, nothing succeeds. A few years ago, we had a servant who would unwaveringly read Hanuman Chalisa every evening, for an hour. That was his bhakti. Without undiluted bhakti, it would have been impossible to compose the Hanuman Chalisa or Ramcharitmanas. There are layers of meaning within those 40 (or 43) verses, constantly chanted and sung. The last doha sums it up. “O son of Pavana! O one who removes difficulties! O one whose form is full of auspiciousness! O leader of divinities! Along with Rama, Lakshmana and Sita, may you reside in our hearts.” Blessed are those who possess bhakti.