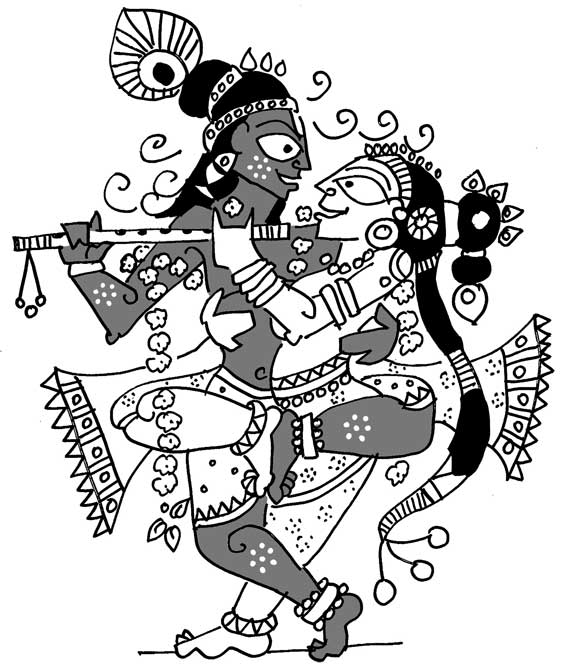 Was the wisdom of the ancients given attention in India? For their thinking covers almost the whole of life. Even in the 21st century, their wisdom remains relevant. In our ‘materialistic’ era, from the time a child is born, it is told that one of the greatest things it can aspire to be, is to be successful. Very often, the child is told of the trappings of success. A flat in the heart of a city, a large country home, a Rolls-Royce parked outside, fully paid up for, etcetera, prove that the by now the grown-up child, has indeed, been financially extremely successful. Yet, it is a rare parent or nurturer who teaches the child to ask itself exactly what constitutes success.

Ancient wisdom teaches that perceptions of success could drastically vary from person to person. One of the most controversial measures of success is in the figure of Radha, the perennial beloved of Krishna, the ninth and the most complete avatar of Vishnu. Right from the beginning of his life, Krishna was fully conscious of his divinity. In fact, Vishnu revealed to his imminent human parents, Devaki and Vasudeva, imprisoned by Kamsa, the fact that the baby who would be born to them shortly was indeed, himself. Vasudeva was exhorted to carry the infant Krishna to be safely brought up by Yashoda and Nandagopar, far away from the murderous hands of Kamsa.

Miraculously, Vasudeva found the heavy chains binding him fall off, the prison gates wide open, and the guards in deep slumber. It was just a matter of a heart-wrenching second to take the baby away from a distraught Devaki, who had watched her seven newborn sons being dashed to death on the prison stones. In her heart, Devaki nurtured a faint hope that this child at least would grow up to adulthood, albeit far from her. Devaki’s breasts grew heavy with milk that Krishna would never suckle from her. It is said that according to the law of karma, Devaki was Kaikeyi of the Ramayana reborn. In the Ramayana, Kaikeyi was responsible for Rama’s mother Kaushalya being separated from her son, thanks to Kaikeyi’s obduracy. Kaikeyi, in a misplaced wish to make her son Bharata the king of Ayodhya after Dasaratha, insisted on her erstwhile adored stepson Rama being banished to the forests for fourteen years. Being the canny daughter of Kekeya king, Kaikeyi understood only too well that two possible power centres in Ayodhya, that of the newly-crowned King Bharata and the physical presence of Rama, beloved of the citizenry, would not behoove well for her son. As a consequence, Kaikeyi, reborn as Devaki, had to bear the separation from her son for a long time.

In the meantime, Yashoda, herself Kaushalya reborn, enjoyed mothering a blue, baby god. It is hard to find a better example of a mother-son relationship in our ancient texts. Yashoda is the very personification of motherhood, and Krishna, her quintessentially naughty, but a charming boy.

Radha, the kinswoman to Krishna’s father Nandagopar, came to pay a visit to see Yashoda’s son. As it was, there was a mystery surrounding his birth. The midwife had declared at first that Yashoda had given birth to a baby girl. Later, the news was amended that she had indeed borne a son. It is said that from the moment Radha set her eyes on baby Krishna, she could not bear to leave. A new baby is a very strong magnet of attraction in most households, then and now. Barring matrilineal and matriarchal societies, the birth of a son in the family is a doubly joyous occasion. Going regularly to play with the baby was quite natural in those circumstances. Radha found herself pining for Krishna. She had to visit him daily. A day without seeing him was bereft of meaning and vitality to her. Radha, in her human birth, unlike Krishna, was unaware of her divine antecedents. The Devi Bhagavatam, however, states unambiguously that the celestial beings had first come to Radha to get her permission to let Krishna take a mortal form on earth.

The beginning of Jayadeva’s celebrated Geetha Govindam opened with Radha being requested to escort Krishna home as clouds as dark as Krishna’s skin were gathering in the sky. The imminent thunderstorm would scare the child Krishna. The real storm, however, was in the tumultuous relationship between Radha and Krishna. Radha was related to Krishna’s father. She was much older than him. She was married to Ayyanar. They were a childless couple. Inexplicably, almost under forces well beyond themselves, Radha and Krishna had a relationship where they became lovers.

It is to the eternal credit of our ancestors that they did not limit themselves to rigid and narrow postulates in their methodology of worship or lifestyle. It is only in the Srimad Bhagavatam, and later on in the Mahabharata, that Krishna is described as an ideal son, friend, lover, counsel, and guide. In fact, he could even be considered to be an ideal nephew, as he was instrumental in giving his uncle Kamsa salvation by killing him. Death at the hands of the divinities was a certain route to salvation.

Samuel Johnson was the person who compiled the very first dictionary of the English language. Boswell is the person who recorded Johnson’s life in a delightful manner. Rather, like Boswell was to Johnson, it is Radha who shines incandescently as the lover of a god. Radha’s love for Krishna is absolute and unconditional. True, she did berate Krishna for his myriad relationships in Vrindavan. But at no point does she leave him.

In the Hindi film Mughal-E-Azam (1960), there is a hit song, “Mujhe mat pooch mere Ishq main kya rakha hai / Do not ask me what is there for me in my love.”

Radha personified this. All she knew was that she loved Krishna. Her desires were simple and straightforward. Being with Krishna made her happy. His absence was torture for her. Each moment with him, whether talking, making love, fighting, then making up, listening to his mesmerising flute song, frolicking in the deep waters of the Yamuna, or merely being with him was bliss for Radha. She did not ask for anything in return. True, she was delighted when Krishna responded to her.

It was only to Radha that Krishna confided that he was leaving his pastoral childhood home, probably forever. Radha refused to marry him. She knew that their kind of love would never be condoned, let alone be approved of, in a larger society. Her youthful lover was going to become the heir of a kingdom. Radha had been chagrined by Krishna’s glad eye in Vrindavan. It was not just the womenfolk of Vrindavan who found this boy god irresistible. Each of the denizens of the forest, the gwala (cowherd) boys, the men of the village, and even his own father Nandagopar were enthralled by him. It was Krishna who urged the people to stop worshipping the remote deva Indra, and to worship the mountain Govardhan instead. He was able to convince them to break an age-old custom. Such was Krishna’s ability to persuade and charm.

When Krishna left Vrindavan, Radha found herself to be totally isolated. All the other women of Vrindavan were envious of the hold that Radha had over Krishna. Even when Krishna was with them, they sensed a remoteness in him which dissolved only when he was with Radha. They knew very well just how much Radha was pining for Krishna. It was just the single hope that one day they would be together again which kept Radha from throwing herself to her death into the swift-flowing Yamuna. Krishna was on this earth. That was good enough a reason for Radha to continue to live here.

Krishna’s elopement with Princess Rukmini was another bit of news that would have naturally hurt Radha. At no point in their relationship did Radha demand a return of any sort from Krishna. It was as if her colossal love for Krishna was big enough to exist by itself. There was no need for any outside input for that.

Radha lived through tales of Krishna’s many marriages. His political interest in his cousins was gaining credence. Yet, for Radha, Krishna was her unequivocal lover. Radha lived out her ordained time on earth and passed on.

At the end of Krishna’s life, he sat on a tree dangling his foot downwards. Bali, the vaanar king who Rama had killed surreptitiously in Ramayana, got ready to complete their karmic action. Bali was reborn as Jara, the hunter who mistook Krishna’s red foot to be a bird and shot his arrow at it. This was the end of the Krishna avatar as we know of it. Krishna pacified the horrified and contrite hunter. He sent away Daruka, his chariot driver. He advised Uddhav to go and spread the story of Krishna, until it was time for Uddhav to be gathered back into Krishna, into whom the whole universe dissolved.

Uddhav, loath to leave the dying Krishna alone, astonishingly watched Radha manifest herself to Krishna again. Krishna, that complete incarnation of Vishnu, from whom came the whole of creation and in whom it redissolved, himself melted into Radha. Such was the power of love.

What is important here is how ‘successful’ Radha was. There were questions aplenty. Was she just a woman who had a youthful fling with her chieftain’s son? Did she love him? Did he love her? Were there other ways for her to live? Could she not have accompanied Krishna back to Mathura? Could she not have lived as his queen? Why did she make no demand of him ever? Was she a fool? Naïve? Most crucially, what was the ‘value’ of her love, something that Krishna didn’t seem to mind abandoning?

Krishna had many wives. Yet, the most popular chant of his devotees is “Radhey Krishna!” Her name precedes his, always. One knows the names of Krishna’s official wives by rote. Rukmini, Satyabhama, Jambavati. This list has sixteen thousand and eight names. Radha’s name, on the contrary, is carved into Krishna’s very self. Whether Radha’s love was a tragedy or a humongous success is left as a decision to each individual. Such is the freedom envisioned in Sanatan Dharma.