A Longing for Home

We are suffering from a collective affliction called nostalgia 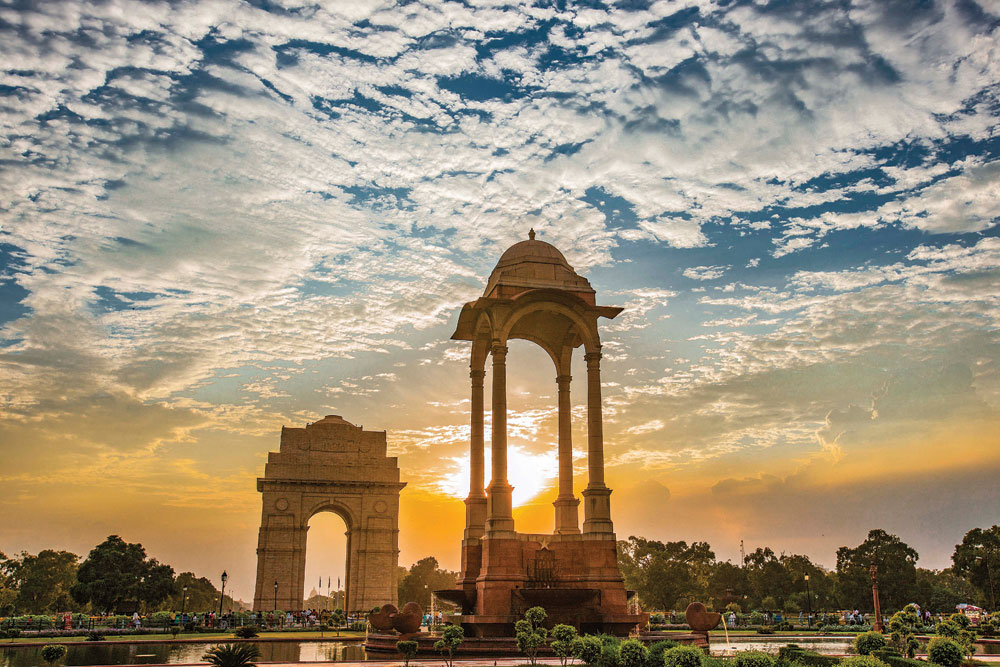 
I HAVE A CONFESSION; I have always been a fan of India Gate. Over the last few weeks, as the JCBs have come juddering in, there has been a gasp of despair from many quarters. Sitting 1,500 km away I feel especially forlorn looking at the paths leading to India Gate, plundered by machines. Given the lockdown in the Capital, it is not like Delhi inhabitants can witness their city’s innards exposed. But the distance aggravates my unease. I try to identify my feelings as I stare into the photos. Police check posts stand where trees once rooted. The iconic street lamps have disappeared. The lawns have vanished, replaced by mounds of mud. There is so much mud and so little green. The mounds remind me of something…the makeshift graves that have recently emerged on riverbanks. I shudder at the thought; but both landscapes share similar contours of the earth churned, the earth in upheaval.

Our collective memories of India Gate are numerous and diverse; sucking jamuns that lipsticked one’s teeth purple or sitting in a jam of absurd swan-shaped boats on an all too narrow canal. Thanks to Pradip Krishen’s wonderful book Trees of Delhi: A Field Guide (2006), we know that the trees on both sides of Rajpath are (were) not jamuns, ‘but a closely allied relative known as ‘rai jamuns’’. When I think of India Gate, I see heads popping out of autos at the red lights to admire the view. I remember walking down from my old office on Rafi Marg and around the fountains of Raj Path, with a friend, in late January taking photographs of Parliament House and Rashtrapati Bhavan illumined for Republic Day. Even the most rigid cynic will admit to feeling a tad moved by the sight of those buildings bedecked in amber light.

For me, India Gate was always about the late-night drive and ice cream. In a city devoid of a beach, here was our Juhu and our Marina. There are those who flock to it, and those who turn their noses up at it. All sorts and all kinds gathered at India Gate. From the large picnicking parties that would spread out their rugs and take out their Hot Cases and Milton flasks, to the parents with a child careening down the lawn and into freedom, to young cavorting couples searching for darkened corners. I remember wandering down India Gate on a smog-choked November night a few years ago with a friend from out of town. I reveled in the bustle of the people, the lights of the glow-in-the-dark boomerang that balloon-wallas spun into the dark sky, and the sight of pink puffs of cotton candy. The smog and the hooting of horns left me unaffected; I was engrossed in a sensation of community. It is not like strangers bonded on the lawns, but in that moment, it felt like the city was ours, ours to enjoy, ours to celebrate.

But my nostalgia for India Gate is merely emblematic of a longing for a pre-pandemic life, a yearning for a time we could comprehend and which did not petrify us. Like so many others, I am bereft of words when a writer sends me an article, and the next day tells me that her husband had died over the weekend. Or when another writer mentions that he’s writing on half a lung. One cannot speak to a friend or call a relative without hearing stories of distress and despair. For weeks, Twitter had become an SOS for oxygen and beds, concentrators and medicines. Scrolling down pleas for help, one occasionally stops dead in one’s tracks, recognising a name. ‘Tragedy’ became full-bodied as one read of twin brothers dying within days of each other; friends racing across cities to find oxygen; children left as orphans within a week’s span; sons whose last glimpse of their mother was on a doctor’s mobile phone; of daughters standing in hour-long queues to get their mothers cremated; families grieving but unable to gather. Hearing of lives eviscerated, one feels heartache for the families; relief that it wasn’t one’s own; and terror that it could—so easily—be one’s own.

I long for a time when social media was essentially just personal parades and political ploys. With every piece of bad news delivered, I want to return to the era where baby photos, vacation sunsets and pet antics told the story of our lives. I watch an episode of Seinfeld every dinner to drown out the newspapers and TV channels. And looking at Elaine and Jerry and George, I want their lives. Lives which consist of idling at coffee shops; walking the city; lounging on friend’s couches; fighting over the remote; discussing where to eat; discussing where not to eat; going to the cinema; meeting new people; dissing new people; making plans; not making plans. By wanting to be Elaine and Jerry and George, we all merely want to dwell in our own past, in lives that we’ve known. Today, we are a generation afflicted by a disease called nostalgia.


In a city devoid of a beach, here was our Juhu and our Marina. There are those who flock to India Gate, and those who turn their noses up at it. My nostalgia for India Gate is merely emblematic of a longing for a pre-pandemic life

The word ‘nostalgia’ originates from two Greek root words; ‘nostos’ ‘return home’ and ‘algos’ ‘pain’. Originally, the word didn’t mean just a longing for the past, it meant an ‘acute homesickness’. Today, we are all afflicted by a homesickness, a homesickness for the past. Our homes stand not in these times of disquiet and suffering.

The word was coined by Johannes Hofer (1669–1752) a Swiss physician in his medical dissertation in 1688. For him nostalgia was ‘the sad mood originating from the desire for return to one’s native land’. Svetlana Boym writes in The Future of Nostalgia (2002) that the first patients diagnosed with the disease in the 17th century were Swiss soldiers fighting abroad and Swiss domestic help working in France—essentially those who had left home and now longed for it. She writes, “Longing for home exhausted the ‘vital spirits,’ causing nausea, loss of appetite, pathological changes in the lungs, brain inflammation, cardiac arrests, high fever, as well as marasmus and a propensity for suicide.” It was found that nostalgia could be triggered in Swiss soldiers by any totem of home, from thick cow milk to folk songs of the Alpine valleys. Cow bells were identified to be especially potent in herding Swiss soldiers into nostalgia. A host of cures were offered, from leeches to opium to stomach purging. But the most sure- shot cure was (unsurprisingly) a return to the homeland.

Reading about the pathologies of nostalgia of the 17th century, I find more and more common threads with our present condition. Our longing for our pre-pandemic lives can be set off by any incidental sight or sound; a photo of India Gate, the smell of popcorn, a faded boarding card. And the only remedy for this condition is a return to our past.

Four hundred years ago, nostalgia had both negative and positive connotations, as it does today. For the Swiss doctors the homesickness for one’s native land expressed patriotism. For the American doctors “nostalgia was a shameful disease that revealed a lack of manliness and unprogressive attitudes.” Doctors in France had another interpretation, notes Michael S. Roth in the paper Dying of the Past: Medical Studies of Nostalgia in Nineteenth-Century France, “Some writers emphasize the links between nostalgia and patriotism, whether to celebrate the French desire for freedom or to explain that the French make poor colonizers because they miss their homeland so much.” In France it was believed that city folks could not fall prey to nostalgia as easily as rural “primitive” people. A “civilised” society embraced change. Nostalgia was seen as anti-progress.

America was a young country, there was no harking back to the past. The American doctors believed that “public ridicule” could cure soldiers of this ailment. When I come across this in a chapter by Boym I immediately think that today’s ruling regime is just like those American doctors. The lamentation over the changes in Rajpath are met by chides. Those who believe that a rehaul is necessary deem the naysayers as trapped in the past, that they are unwilling to progress and embrace the future. And that they can be cured of these notions with online ridicule.

By the 18th century, the meaning of nostalgia had changed, writes Boym, “Nostalgia is treated in a new genre, not as a tale of putative convalescence but as a romance with the past.” Today, nostalgia is simply a longing for a simpler time, a pre-pandemic time. It is a homesickness for a soggy butterscotch Cornetto, shared by two, on a muggy May night, by India Gate.