There is no single, pure Indian way of cooking and eating 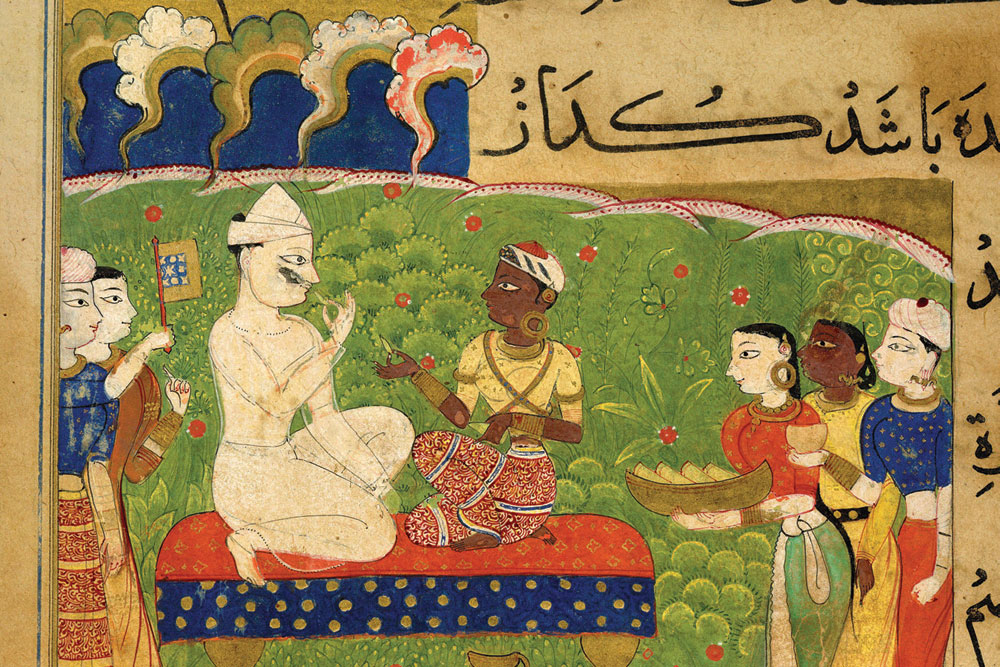 
WHEN BABUR ONCE wept, by his own ad­mission, at the nostal­gia for Kabul that overwhelmed him when he tasted a melon in Hindustan, it was not the sort of behaviour you would expect from one of the greatest warriors in the world. But the founder of the Mughal Empire was a poet and an aesthete as well, and most certainly an epicurean. He was also bitterly critical of the land when he first arrived in 1526, writing in a fit of pique, “Hindu­stan is a country of few charms… there are not good horses, no good dogs, no grapes, muskmelons or first rate fruits…” But hav­ing dried his tears, Babur set about creating the ephemeral and lovely things that evoked Persian sensibilities—well-planned gardens, orderly streams, and excellent fruit. He imported fruit seeds for his gardeners to grow in Hindustan and employed the best cooks from the kitchens of his defeated foes.

As for Babur’s grandson Akbar, he set up something of a fine-foods laboratory in his capital cities. He sent for 400 cooks from all over Persia and Hindustan, brought horticulturists from Central Asia to supervise his orchards, tinkered with watering his vegetables with rosewater to improve their flavour and had the chickens massaged with musk oil and sandalwood to enhance their meat, amongst other eccentric and inspired experiments. Akbar also married many local princesses, who would bring with them the flavours of their regional cuisines and thus a fusion food was created, which would become, through its dissemina­tion into the minor courts, Indian haute cuisine. The names of the foods reflect their diverse culinary origins—Arabic (haleem, halwa), Persian (pulao, dumpukht), Turkic (qutab, keema).

When tracing the history of food in India it is difficult to understand the current state of overwrought angst that exists around the issue of iftar, halal, and all the other particulars of food culture associated with non-Hindu religions. For India has been, from the very dawn of time, one of the world’s truly glob­al food economies. Five thousand years ago at the time of the Indus Valley Civilization (IVC), India was already connected to the world in intricate and meandering ways, through both sea and land routes, through oceangoing ships and caravans. Cook­ing techniques, ingredients and plants came into India from Af­ghanistan, Persia, Central Asia, the Middle East, Africa, China, Southeast Asia and Indonesia. Barley, which was the main cereal of the Indus Valley, the only cereal to be mentioned in the Rig Veda and part of shraadh ceremonies even today, came to India from the Fertile Crescent (Mesopotamia region). The IVC chefs were also using turmeric, ginger and garlic, concocting a 4,000-year- old north Indian “curry”!

When the Aryan speaking people started drifting into India between 1500 and 1000 BCE, they brought with them certain veg­etables, lentils and, crucially, cows, and thereby the milk products that we now consider elementally part of Indian food—ghee and yoghurt. Indeed, raising cows was the main occupation of the Indo-Aryans, and the word for clan even today, gotra, means “cow­shed”. They also brought with them their fiery animal sacrifices and an incipient caste system. Indian food historian KT Achaya demonstrated that the Indo-Aryans ate various meats, because they were offered up in elaborate sacrifices to the dead, and that these meats included a bewildering variety such as beef, mutton, pork, poultry, gharials, turtles and tortoises.


When tracing the history of food in India it is difficult to understand the current state of overwrought angst that exists around the issue of iftar, halal, and all the other particulars of food culture associated with non-Hindu religions. For India has been, from the very dawn of time, one of the world’s truly global food economies

By around 1000 BCE social divisions had hardened, with resulting food and marriage restrictions between castes and all-pervasive ideas of purity and pollution. Meat was still widely eaten, however, and it was only with the arrival of the Buddhist and Jain traditions in the 6th century BCE that ideas of compassion for animals and non-violence led to vegetarian­ism in some sections. Austerity and vegetarianism came to be associated with greater spiritual cachet and as people aspired to launch themselves into the higher castes, they developed these practices too. Nonetheless, true vegetarians remain a minority in India today with a recent census estimating the number at just 20 per cent. For others, vegetarianism remains a flexible and somewhat bemusing life choice—vegetarian only within the home, vegetarian except for fish/chicken/eggs, vegetarian only on certain days etc. As for kings and the elite, they were expected to consume a startling variety of meats and a Sanskrit treatise composed by a Brahman in 1550, the Ksemakutuhalam, lists boar, lamb, venison, rabbit, lizards, pig, peacocks and tortoises as acceptable foods.

As exotic ingredients continued to flow into India in the first millennium, some of them were then transformed into novel foods with few parallels in other great culinary cultures. The Sanskrit word for clove (lavanga) comes from the Malay word bungalavanga, while the betel palm and betel vine leaf reached south India from southeast Asia by the 5th century CE. The passionate popularity of the paan created with these ingredi­ents mystified later visitors, while 13th-century Sufi poet Amir Khusrau was scathing of people who could not appreciate the nuance of paan’s macerated charms. “The Persians are so sluggish as not to be able to distinguish between paan and grass,” he sniffed. “It requires taste to do so.” The other key ingredients of what is considered quintessentially Indian food came later in time, and from the other end of the earth. In the Columbian Exchange, beginning with Christopher Columbus’ voyage to America in 1492, goods were traded globally between the western hemisphere and Africa, India and Oceania. In addition to potatoes and tomatoes, the single most important ingredient to arrive through the Columbian Exchange was the chili pepper, which quickly replaced black pepper in popularity and became a key ingredient in Indian food.

All of which brings us neatly back to Babur and his Mughal dynasty. According to food historian Colleen Taylor Sen, “to the somewhat austere Hindu dining ambience the Muslims brought a refined and courtly etiquette of both group and individual dining.” Where earlier food was defined in medicinal and moral terms, regulated by the ancient ayurveda medicine whose central belief was a strict correlation between diet and health, the Mughals introduced food as an art and a cel­ebration. Recipes became intricate, requir­ing great expertise in the chefs. Murgh mas­salam, for example, was made by removing the bones of a chicken so that it remained whole, marinating it in yoghurt and spices, stuffing it with rice, nuts, minced meant and boiled eggs, and then baking it coated with clarified butter and more spices.

But if the Mughals developed a hybrid cuisine of great refinement, there was also a realisation of difference, a pragmatic un­derstanding of the essentially varied food habits of different religions. Akbar banned the eating of beef in his empire in deference to his Hindu subjects and himself gave up eating meat for many months of the year. When going to war with their huge armies, the Mughal chieftains would organise sepa­rate kitchens for their soldiers, employing Persian, Turani, Kashmiri and European cooks, as well as Brahman cooks to prepare food for the Hindu soldiers.

As for the Europeans who began their conquest of India as the Mughal Empire crumbled in the 18th century, they brought certain foods too, not all of which can be celebrated with as much enthusiasm as the fragrant spices and herbs of earlier centu­ries. The English brought pale ale, certainly, but also vegetables of dubious delight like the cauliflower, orange carrots, and cabbag­es. They definitely got the better end of the bargain themselves, taking back mulligatawny soup from the Tamil muluhathani pepper soup, and the ingredients for the national British food— chicken tikka masala, while leaving us potato cutlets, trifle and custard, and cucumber sandwiches. Even the word “curry”, as used in Europe today, is a blend of Punjabi and “Mughlai” cuisine modified to suit local tastes. Considering the exquisite variety and intricacy of Indian food, this is mildly insulting to gastronomes and lexicographers alike. According to food historian Elizabeth Collingham, when the Portuguese first captured Goa in the early 1500s they asked the locals what they were eating “and the Indians replied using a word like khari or caril,” referring to a blend of spices, and this became the “curry” of infamy.

Today, the bougie cafes of Soho and Notting Hill serve “masala chai tea” to their cosmopolitan patrons and there is a sense that empire and karma have collided one final time.