Will a Muslim’s embrace of Hinduism trigger introspection and reform? 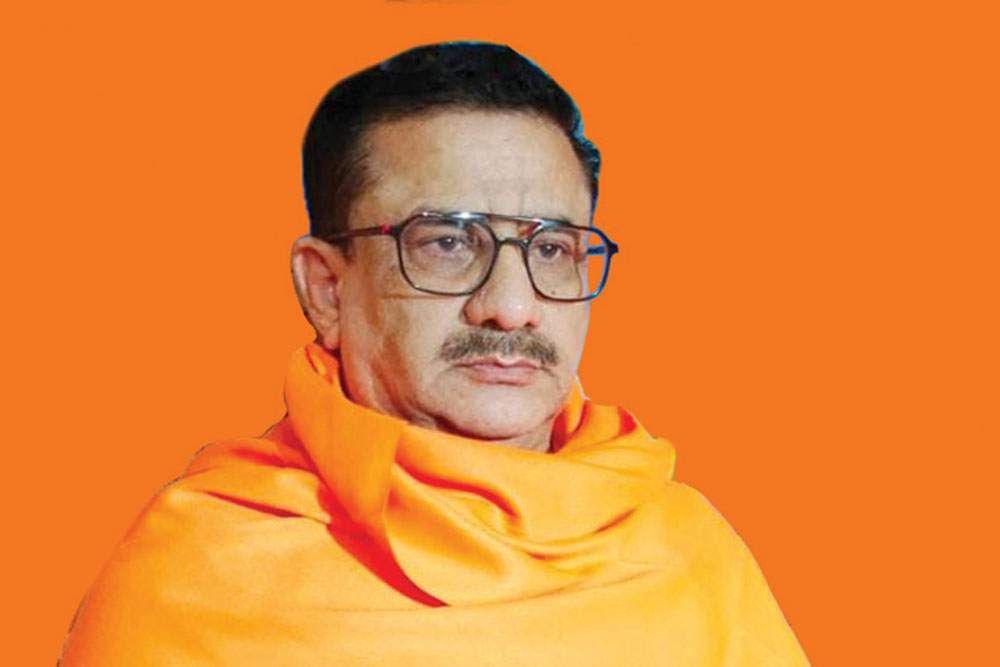 
ON DECEMBER 6TH, the 29th anniversary of the demolition of the Babri Masjid, Syed Waseem Rizvi converted to Hinduism. The ceremony was conducted at Dasna Devi Mandir in Ghaziabad by its head priest, Swami Yati Narsinghanand. Rizvi took on a new name, Jitendra Narayan Singh Tyagi, after his ghar wapsi.

Speaking to a national media channel afterwards, Tyagi said, “I was removed from Islam. The prize money on my head is increased every Friday. Today, I am embracing Sanatan Dharma.”

In educated circles in India, that is the English-speaking, liberal ones, this is a somewhat unfashionable, if not embarrassing, topic. Especially, among Hindus. Yet, what has happened is significant and demands our attention.

Not just the person—Syed Waseem Rizvi—but also what he is saying. Rizvi who?

Or, should I say, Jitendra Narayan Singh Tyagi, instead?

One who is better read and well-informed shrugs dismissively, “Oh, you mean the guy who became Hindu?”

A politically active member of the Lutyens’ elite immediately makes her stand known, displaying her own inclinations and predilections. She dubs Rizvi a Hindutva stooge, rabble-rouser, and troublemaker.

I start checking on how the event has been covered. There are, of course, the mandatory wire stories from PTI and ANI widely carried by newspapers. A phalanx of known Twitter handles and bots have also made the occurrence better known.

A supposedly secular and progressive Muslim commentator is quoted as saying, “This is all part of the strategy to keep the anti- Muslim cauldron cooking. Now a rabid Hindu hate-monger has found a Muslim who can spew venom against Islam, the prophet and the entire community. No surprises this is happening just before elections.”

Those who consider themselves more astute in this camp immediately add, “Look at Mathura and Kashi. It’s all well-planned and orchestrated. But when it comes to Rizvi, it will have no impact on the Uttar Pradesh (UP) election. Muslims never vote for the BJP anyway.”

The triumphant conclusion: “Rizvi is a nobody.”

Whether he does or does not have any impact on the forthcoming election, one thing is certain. Rizvi—or Tyagi as he now prefers to be called—is not a nobody. As his former name suggests, he is a Syed, a person whose family traces its descent from no less a personage than Prophet Muhammad, the founder of Islam, himself.

In addition, Tyagi was also the former chairman of the Shia Central Waqf Board in UP. This is a position of considerable power and influence. Waqf Boards, both Sunni and Shia, control extensive properties and charities. The Shia Waqf Board, in fact, was a party to the Ram Janmabhoomi-Babri Masjid dispute till Tyagi (then Rizvi) withdrew the claim in favour of the Hindus as a gesture of goodwill in October 2019. He angered the other Muslim parties to the dispute in doing so.

Tyagi has been in trouble with members of his community for quite some time. Last month, he released a controversial book on Prophet Muhammad. Written in Hindi, it had a lurid and somewhat risqué cover of a bearded person with a goblet of wine eyeing a much younger woman in déshabillé. It was bound to shock and hurt sentiments. Asaduddin Owaisi, president of the All India Majlis-e-Ittehadul Muslimeen (AIMIM), registered a complaint against Tyagi for vilifying Prophet Muhammad.

Earlier this year in March, Tyagi had filed a Public Interest Litigation (PIL) petition urging the state to remove 26 verses from the Quran which, he claimed, promoted enmity and violence against non-Muslims. Tyagi received several death threats. An orgnisation called Shiane Haider-e-Karrar in UP announced a reward of ₹ 20,000 for anyone who “beheaded” Tyagi. A Moradabad-based lawyer was also arrested for allegedly upping the reward to ₹ 11 lakh for the same act. Many lawsuits and FIRs were filed against him.

The Supreme Court in April this year dismissed Tyagi’s PIL calling it frivolous. In addition, it imposed a fine of ₹ 50,000 on him. Tyagi said he would appeal. Actually, the petition was not entirely de novo. In March 1985, Chandmal Chopra filed a writ petition in the Calcutta High Court calling for a ban on the Quran under Sections 153A and 295A of the Indian Penal Code, and Section 95 of the Criminal Procedure Code because it “promotes disharmony, feeling of enmity, hatred and ill-will between different religious communities and incites people to commit violence and disturb public tranquillity….”

The petition was dismissed in May 1985, but riots ensued in many parts of India and also across the border in Bangladesh, where 12 Hindus, mostly poor, were killed and over a hundred injured (The Statesman, May 13th, 1985). Sita Ram Goel co-authored a book with Chopra the following year, detailing the entire story of how the petition came to be submitted, dismissed, and how “secular India” rallied to silence any debate over the issue.

Tyagi, not surprisingly, has been condemned by both Muslim clerics and Hindu secularists, by opposition leaders as well as BJP politicians. His own family, including his wife, children, and brother, disowned him last year. In January 2018, he wrote a letter to Yogi Adityanath calling for the banning of madrassas in UP. He accused them of becoming “business ventures for mullahs” and engendering “terrorists instead of ensuring jobs for Muslims.”Later, he wrote to Prime Minister Modi in a similar vein.

I listened to several interviews he gave. In one, he said his own community had outcast him, refusing to give him a burial. “Do you mean to say that I would let my corpse rot on the street? Why wouldn’t I embrace Sanatan Dharma which will accord me a decent cremation with full honour and all the proper rites?” Tyagi also spoke at length about how Muslim masses were being misled: “The call for prayer was useful at a time when people didn’t have watches, but now you don’t need loudspeakers to tell you what the time of the day is. Why should those who don’t follow your faith be woken up so early in the morning because you want to pray?”

I also got hold of Tyagi’s controversial book on Prophet Muhammad. Though extremely hard-hitting, it is not an entirely original critique or exposé. Tyagi walks in the footsteps of several ex- Muslims, doubting the holiness of the Prophet and the manner in which his flock of the faithful were pitted into a never-ending and violent struggle with unbelievers.

I found several comments on these videos, some by people with Muslim names, praising Tyagi for his courage. His book on Prophet Muhammad can be compared with BR Ambedkar’s Riddle of Rama and Krishna or similar critiques of the established dogmas of religions. Citing previous retaliation and attacks on Salman Rushdie, Taslima Nasrin, Charlie Hebdo, and so on, many fear for his safety. When one interviewer asked him how he coped with the threats, he replied, “We all have to die one day.” He adds that as a Shia, which according to him means friend, he wants to love everyone, which is why he opposes that version of Islam which regards non-Muslims as enemies.

Tyagi’s critics are quick to point out that he was earlier a member of the Samajwadi Party, reputedly close to Rampur MP Mohammad Azam Khan. Yet, we cannot overlook the fact that there is a growing community of ex-religious people all over the world. This includes ex-Muslims in India, some of whom have moved over to Hinduism, while the others prefer to remain non-religious.

A Pew Research Report estimated that 6 per cent of those born Muslims in India have become atheists or lost their faith. Only a small fraction of these have come out into the open like Tyagi.

Will Tyagi’s conversion trigger reform and introspection, or will it be lost in polemics and political activism? Will his former co-religionists spare him, and will his newly found Hindu supporters continue to befriend him? Will he join the ranks of internationally renowned and influential ex-Muslims or reformists like Ali Sina, Ibn Warraq, Ayaan Hirsi Ali and Tarek Fatah, or will he end up abandoned by both Muslims and Hindus, even paying the ultimate price for apostasy, which is punishable by death in Islamic jurisprudence?

Only time will tell.

But if we are a free society, Tyagi must have the right to express his views. He should also avoid being deliberately provocative which, in the long run, will be dangerous and counterproductive. We, rather than just opposing or encouraging him, should listen to what he has to say, making up our own minds about its veracity and substance.

All great traditions, including religious belief systems, must change with the times, embracing improvement rather than executing their reformers. That is the way to work towards a humane, inclusive, and progressive world civilisation.

Sanatan Dharma, which Sri Aurobindo called “life itself” in his famous Uttarpara Speech of 1909, “is not circumscribed by the confines of a single country… A narrow religion, a sectarian religion, an exclusive religion can live only for a limited time and a limited purpose.” That is why Hinduism should also be an open system, welcoming anyone who wants to join.

(The Aesthetics of Indian Politics series will resume in 2022)