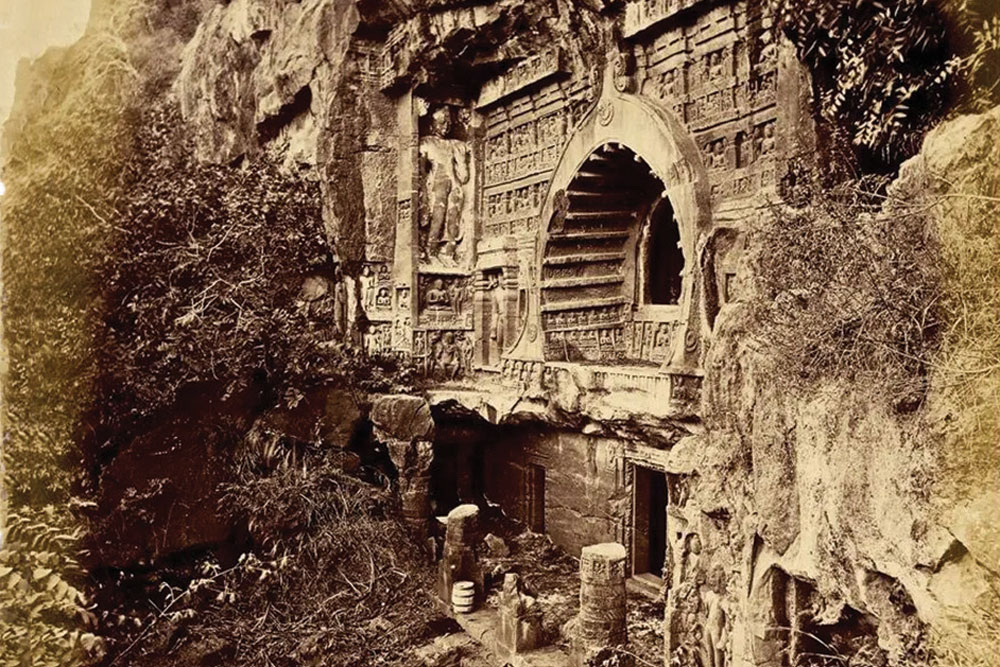 The entrance to the rock-cut Buddhist temples of Ajanta


Student: You mentioned last time how the pasts, vasts, of India show themselves to us in tantalising ruins strewn here and there.

Teacher: Yes, this subcontinent whose present we are trying to reconnoitre and reshape, requires a fresh look at our pasts—or vasts—as you call them.

Student: What prevents that disclosure?

Teacher: I would call that ideology. It is ideology that prevents the past from revealing itself.

Student: But isn’t ideology a system of ideas? Everyone is justly—or unjustly—proud of the ideology they subscribe to. In fact, not just politicians, but academics blazon their ideological leanings. Don’t they?

Teacher: There is another sense in which we may understand ideology. It is not just a system or, as some have tried to exalt it, a science of ideas. Or even a set of beliefs characteristic of groups or individuals or an arrangement of beliefs and principles which form the basis of economic or political theory and practice.

Ideology may also be defined, after Marx, as false consciousness.

Student: Why is it false consciousness?

Rather, it is false consciousness because it is not falsifiable. It is a belief not based on reason or truth but on physical or psychological necessity, even fear.

Student: Fantastic point! If I understand you correctly, we cannot “correct” false consciousness through aggressive counter-ideology.

Teacher: Exactly. We have to shine the light of truth, not try to counter the falsehoods of others.

Student: In other words, our entire strategy in our civilisation war needs to be re-thought.

Teacher: Yes. As TS Eliot put it in ‘Burnt Norton’: It seems, as one becomes older,/That the past has another pattern, and ceases to be mere sequence—/Or even development: the latter a partial fallacy/Encouraged by superficial notions of evolution,/Which becomes, in the popular mind, a means of disowning the past.

Student: Can you explain the lines?

Teacher: The past has a pattern other than what we think, what most people believe. Not just the past of individuals but that of communities, and countries. Even from a spiritual point of view, the past of humanity itself. The past will speak to us if we are prepared to listen. It will show us how we became this way. It will reveal, at least partially, the way to ourselves.

Student: Poetry and history—but aren’t they so different, with different muses even?

Teacher: Calliope of epic poetry and Clio of history, according to the Greeks. But for us in India, with our mythopoetic imagination of the past, they seem to merge in itihaas. So, it happened.

Student: Can legends, myths, epics, and local beliefs take the place of history, which is a “scientific” and systematic reconstruction of the past?

Teacher: Surely, we need both. In fact, we need multiple ways of remembering and recovering our pasts. Cultural memory, bardic tales, and folk legends, in addition to official and academic histories, contribute to our collective consciousness and sense of the past.

Student: So, you’re saying that modern history is not superior to or the only authorised way to engage with the past?

Teacher: Yes, in fact, history in the modern sense is relatively new, not only in India but also in the West. In India, we can go back to James Mill’s famous, even notorious, The History of British India, as a foundational text. It is a monumental work written over some nine years, from 1808 to 1817. It contains many of the major tropes that have dominated our sense of our past.

Student: Let us go to Ajanta and Ellora now, which we postponed last time.

Teacher: Their extraordinary “discovery” by a colonial army captain, John Smith of the Madras Regiment, is itself the stuff legends are made of.

It seems he was hunting for a tiger, his hundredth, having already killed 99 of them!

Student: Very damaging from a contemporary conservation point of view.

Teacher: But the year was 1819 and the killing of tigers was an imperial pastime, even duty, actively supported by native princes.

As it happened, both Ajanta and Ellora were in the Nizam of Hyderabad’s dominions.

Teacher: Yes. He “inherited” them from the conquests of Aurangzeb in the Deccan, after Mir Qamar-ud-din Khan Siddiqi Bayafandi (1671-1748), better known as Nizam-ul-Mulk Asaf Jah, founded the Asaf Jahi dynasty, by declaring his independence in 1724 from the Mughal throne. He came to be called the First Nizam of Hyderabad. More of this later.

John Smith, chasing the elusive tiger, whom he probably never bagged, stumbled upon an archaeological and cultural find of colossal dimensions and importance.


There was a very important outcome of the discovery of Ajanta and Ellora. A royal cave temple commission was set up by the Royal Asiatic Society in 1848 to study these discoveries. It led, 13 years later, to the founding of the Archaeological Survey of India in 1861

Some say a shepherd boy pointed out the site to him on a cliff. Carefully camouflaged in the reddish-brown hillside was a series of the now world-famous caves in a semi-circular ravine.

Teacher: It is these ‘generic’ Englishmen—or rather British people, for many were Scots, Irish, and Welsh—who were exceptional in that they gave us back an India we knew practically nothing about.

John Smith organised a party of villagers with torches, pickaxes, and spears to clear the path to the caves. When he entered one of them, he was stunned by the calm and timeless visage of the Buddha. It was huge, in vivid colours. A major find indeed, he knew at once.

So excited was he that he carved his name and date in the fresco. To this day, it survives in Cave 10: “John Smith, 28th Cavalry, 28th April, 1819.” Although not at eye-level, much higher up, since he had to climb over a heap of debris and wreckage to enter the cave.

Student: Such vandalism and arrogance!

Teacher: Easy to say so just now. But think of the centuries of destruction and iconoclasm of our Muslim rulers. In contrast, John Smith’s small vanity of inscribing his name on his discovery is certainly excusable.

Also, think of the countless and pointless instances of graffiti on practically all our monuments in democratic India. In fact, visiting two hundred years later in 2019, his grandson, Colonel Martin Smith, even apologised for that infraction.

Teacher: It led to major excavations, which yielded other finds, including Ellora, which was 62 kms west of Ajanta. Also, other caves in Kanheri, Elephanta, Shivleni, Aurangabad, and even the distant Barabar caves, near Gaya, in Bihar. They became the basis of the “Caves” section in EM Forster’s A Passage to India a hundred years later.

In fact, General Sir James Alexander, who was the co-founder of the Royal Geographical Society in 1830, and responsible for exploration and preservation in Asia Minor, Iran (then Persia), Africa, and the Balkans, was the first to publish an account in 1829 on Ajanta. James Prinsep, another distinguished Orientalist, the founding editor of the Journal of the Asiatic Society of Bengal who deciphered the Kharosthi and Brahmi scripts, also wrote an article on the great cave paintings of Ajanta in 1836.

Sir John Malcolm, governor of Bombay Presidency, asked the resident surgeon of Satara, Dr James Bird, to document the artwork in the caves. But he peeled off a painting and damaged some frescoes.

James Fergusson, another Scotsman, and the author of The Rock-cut Temples of India (1845), was alarmed by this destruction. He numbered the caves like “houses in a street.” He also convinced the directors of the East India Company to depute Robert Gill, a major in the Madras Army, to draw copies of all the paintings in the 30 caves.

Gill took 20 years to complete the job despite the forbidding and unforgiving challenges of the extreme heat, inhospitable Bhil countryside, and tiger-infested forests surrounding the caves.

When the Gill facsimiles were published, Ajanta became world-famous.

Student: Where are those paintings now?

Teacher: Apparently, they were destroyed in a fire. Only five remain at the Victoria and Albert Museum, London.

But there was another very important outcome of the discovery of Ajanta and Ellora. A Royal Cave Temple Commission was set up by the Royal Asiatic Society in 1848 to study these discoveries. It led, 13 years later, to the founding of the Archaeological Survey of India in 1861.

Student: Are you saying that our colonisers also helped us regain our past?

Teacher: Isn’t that obvious? It is they who dug beneath the rubble or cleared the undergrowth to recover not just Ajanta and Ellora, but Nalanda, Mohenjo-daro and Harappa.

The colonial hand in the recovery of our past can’t be denied. Today, we are so postcolonial that we do not appreciate nor even acknowledge that Indian modernity was a co-creative enterprise.