Even though its narrative is predictable, this film is a well performed political satire 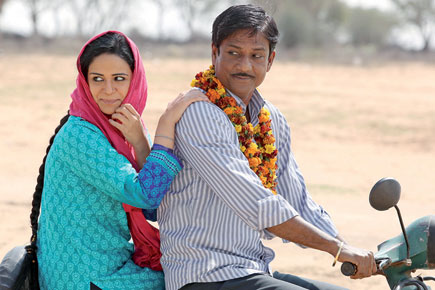 Even though its narrative is predictable, this film is a well performed political satire


Zed Plus is an allegory on power and politics in India. It tells of how a special security detail granted is a symbol of wealth and position. The more unsafe and threatened you feel, the greater individual worth and substance you probably have. Zed Plus security marks the arrival of fame and fortune.

Aslam, an ordinary tyre puncture repairman in a small town in Rajasthan, is asked to preside over a local dargah on the day the Prime Minister is due to visit it. This PM (Kulbhushan Kharbanda) is running a coalition government and the rug is about to be pulled from under him. But on the day he asks for the blessing of the ‘peer’ of the dargah, his government is suddenly and miraculously saved.

All this while Aslam (Adil Hussain) has been at loggerheads with his neighbour, Habid (Mukesh Tiwari), mostly over an attractive woman both married men have the hots for. So when the grateful PM asks Aslam if he has any special requests, he blurts out that he is being threatened by his neighbour. This is immediately given a political slant and is interpreted as being threatened by Pakistan. Aslam is then granted Zed Plus security to protect him from a nonexistent Pakistani enemy. His life alters beyond recognition. Whenever he rides his scooter, the posse of armed guards following him make his visit to the paanwala look ridiculous. He has no privacy. He can’t even cheat on his wife properly, and his mistress is getting antsier by the day.

Though it is refreshing to watch a movie with an important political sub- text, much of the narrative has a fairly conventional and predictable linear treatment. What stands out is the performance of Adil Hussain in the lead role. This actor from Assam has an understated conviction that is arresting.

Off the beaten track, Zed Plus is watchable.