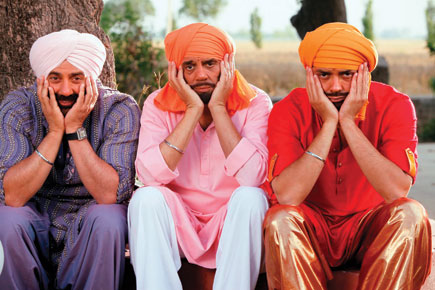 
Varanasi is a good city for spiritual enlightenment but unconvincing as the headquarters of Punjabi bluff and bluster. This is where the father and son con artist duo, Dharam and Gajodhar, spend the meandering first half. Ripping off tourists is their thing, and it’s such an old chestnut you nod off to cliché land.

Then suddenly, given up for dead, the movie is kickstarted and wildly animated in the second half. In hot pursuit of his lady love, Saheba (Kulraj Randhawa), Gajodhar (Bobby Deol), turns up in Punjab. This is the birthplace of the Patiala Peg, and its residents, especially the insanely possessive brothers of Saheba, take their patron saint very seriously.

To abduct a Sardarni from this lion’s den is no laughing matter, but ‘Gajju’ is assisted by his brother Paramveer (Sunny Deol), an NRI from the land of the Single Malt. His persuasive style includes a demo, during which he drinks an entire bucket of rum. The Sardars take to him immediately, and from here on, the comedy is irreversible.

The funniest sequence in the film is about a lonesome single lady called Poli (Sucheta Khanna) who is obsessed with migrating to Punjab’s coldest province, Canada. She speaks no English, knows everything about Canada, and under her salwar kameez sports a T-shirt that says ‘I Love Caneda’ . But the comedy in Yamla Pagla Deewana is an acquired taste. Not everybody would laugh when Dharma (Dharmendra) sticks badly-behaved gentlemen to the wall with ‘Dharmacol’. Nor would it be considered politically correct to be amused when it is suggested that unlimited free visas to Canada be offered to voters at an election rally.

To enjoy the peculiarly Punjabi flavour of this film, you have to let go of little things like inhibitions.