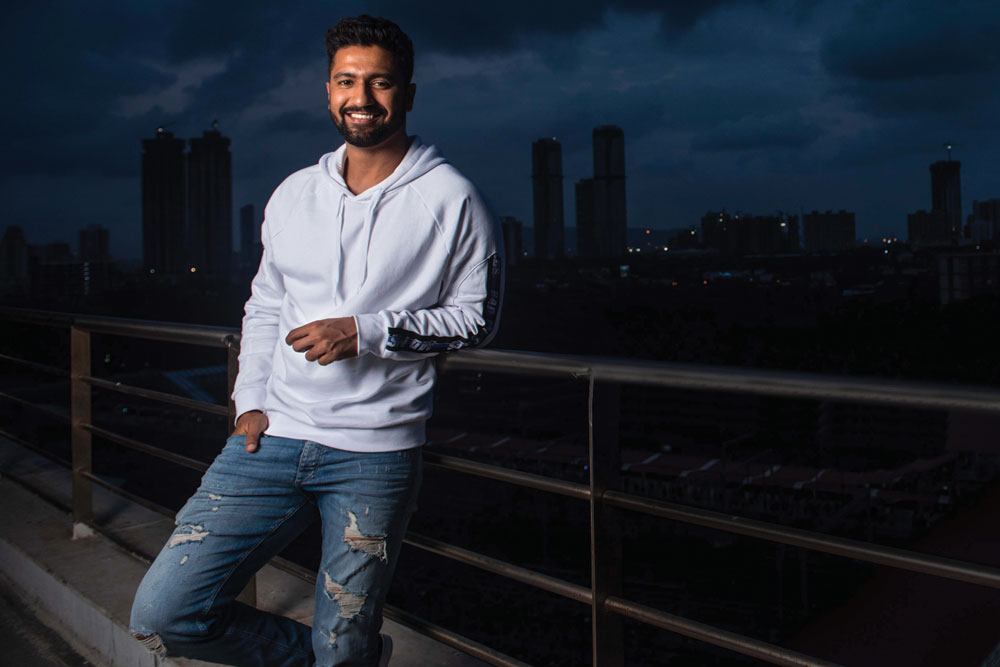 
VICKY KAUSHAL began his acting career as an uncredited extra in Trishna (2011), Michael Winterbottom’s reinterpretation of Thomas Hardy’s Tess of the D’Urbervilles. It was a dance with Huma Qureshi and they were told that it would become as big as ‘Jai Ho’ in Slumdog Millionaire (2008). You can see it now, intermittently in the scenes where Freida Pinto comes to the sets of a movie with her controlling boyfriend played by Riz Ahmed. Both Kaushal and Qureshi are hard at work, thinking it could be their ticket to fame, but the movie sank without a trace.

Fortunately, both Kaushal and Qureshi survived and thrived.

Kaushal, 33, has a few things in common with the character he has just played onscreen, the enigmatic Sardar Udham Singh, who is one of many seemingly peripheral historical characters finally getting his due. Udham Singh was an extra too, in the film Elephant Boy (1937), one of the activities he did in London while he waited to assassinate former Punjab Lt Governor Michael O’Dwyer, the man who gave the orders for the Jallianwala Bagh massacre of 1919. It was an event that deeply affected his psyche and whose re-creation in excruciating detail is the centrepiece of a remarkable new film, Sardar Udham on Amazon Prime Video, directed by Shoojit Sircar.

Kaushal was not the first choice for the role. It was designed for Irrfan Khan but the late actor fell terminally ill before he could shoot for it. But Kaushal seems the perfect choice. Though a child of the film industry, he is devoid of entitlement. His father, action director Sham Kaushal, started as a stuntman and Kaushal says even now his home is like a mini-Hoshiarpur. “My parents are very simple people and we [his younger brother Sunny, also an actor] spent every year going back to our ancestral home in the village which is two hours from Amritsar. My uncle still has a general store there and another uncle is a police officer,” he says. As a child, he heard stories of Sardar Udham Singh from his grandmother. “It is such a sweet memory and to now be playing that man is surreal,” he adds.

It is this quality of having lived a real life that Kaushal brings to all his roles, and it is this that has made him a star against all odds in a ruthless industry where slings and arrows abound.


“I kept my cup empty and just let Shoojitda pour everything he knew and felt about Udham into me. It changes you as an actor and as a human being. That’s one of the things i love about this job,” says Vicky Kaushal

His authenticity jumped out at Aditya Dhar when he watched Kaushal’s first lead role as Deepak Chaudhary in Masaan (2015), where he played a Dom who wants to rise above his lot in life at the cremation ghats of Banaras. Dhar asked a friend for his number, called him, complimented him, and when Uri: The Surgical Strike (2019) was to be cast, he asked him to play Major Vihan Singh Shergill. It was a role that elevated Kaushal from what could have been the vast wasteland of lead roles in indie cinema—noble but not saleable, and second leads in blockbusters—a fate that befalls many good actors. The heroine needs a male actor willing to play second fiddle, the hero needs a stepney? Cast a good actor and watch him do the magic of not stealing the light from the star yet making him/her look good by transforming the film.

Uri gave Kaushal, an engineer by training, the gloss of a star, with the movie becoming a cultural phenomenon. Its war cry “How’s the josh?” became a new nationalistic war cry used by even Prime Minister Narendra Modi. The role won him a national award, which he shared with Ayushmann Khurrana and a permanent place in the next generation of leading men, the most elite club in Bollywood, and the most difficult to enter.

Mozez Singh discovered him while casting for the lead for his film Zubaan (2015), where Kaushal plays a boy with a stutter who goes on to become a singer. It was the first film he faced the camera for—though it released after Masaan. It created a bond between actor and director, and remains very special. Since Zubaan, Kaushal has gone on to work in many superb films, says Singh, with some amazing directors. “Sardar Udham is the strongest example of this. And yet, as much as he is being beckoned by success and stardom, something in his craft still remains completely uncorrupted, just like it was when I first met the gawky young man seven years ago,” he says.

Dhar agrees, saying there is a deep sadness in Kaushal’s eyes, which makes him stand out. It also makes him perfect for roles in films such as Masaan and Sardar Udham, two of Kaushal’s favourite performances. “Both the characters have such innocence and purity to them,” says Kaushal, “that you just want to hold on to these qualities much after they’ve called it a wrap.” For Sardar Udham, Sircar gave him a lot of books to read but eventually, says Kaushal, “I kept my cup empty and just let Shoojitda pour everything he knew and felt about Udham into me. It changes you as an actor and as a human being. That’s one of the things I love about this job.”

HIS PROCESS CHANGES with the role. For Anurag Kashyap’s Raman Raghav 2.0 (2016) where he plays a twisted police officer, he locked himself up in a house for five days, without any external source of distraction. For his second collaboration with Kashyap, Manmarziyaan (2018), he decided to simply let go, and improvise while playing the confused millennial man-child.

Kaushal’s humility is deeply ingrained and sets him apart from his colleagues, who have far more swagger. It allows him to surrender completely to his director and his vision. Sircar says, “I don’t want an actor who starts questioning how good a director I am.” Kaushal doesn’t seem to have an ounce of arrogance in his persona, which Dhar credits his parents for. “I think the only time he went to a film set was when he pestered his father to take him to meet Hrithik Roshan because he was a huge fan. He still has a photo of that meeting.” The family’s rise was gradual, from a Mumbai chawl to a one bedroom-kitchen, finally to a flat in Andheri. It mirrors Kaushal’s own career, which saw him move from being an assistant director on Gangs of Wasseypur (2012) to small parts in Luv Shuv Tey Chicken Khurana (2012) and Bombay Velvet (2015).

It will stand him in good stead in his career and the many disappointments that are bound to lie ahead—along with the triumphs. Already, Karan Johar’s Takht, an ambitious star-studded movie in which Kaushal was to play Aurangzeb has been stalled indefinitely. The Immortal Ashwatthama, a historical epic full of swashbuckling fights and epic confrontations, has been pushed back by six months to be made at the correct scale. He has a high-profile rumoured girlfriend in Katrina Kaif, but it is as difficult to photograph them together as it is to get them to talk about each other.

Sardar Udham is as much a film as a historical document recording both the Jallianwala Bagh massacre in greater detail than it has ever been done before (including in Richard Attenborough’s Gandhi, 1982). In the aftermath, as bodies pile up, a young Udham moves from body to body, carrying those still alive to a makeshift hospital, first in his arms and then in a cart. In one powerful sequence, Sircar demolishes any claims to humanity the British Raj may have had, laying bare their fear that the Rowlatt Act protests would spark another 1857 and their heavy-handedness when it came to any dissent. The film ends with the legend: “2.6 million Indians died fighting for Great Britain in the First and Second World Wars and 4 million died of starvation in the man-made drought in India.” It also notes that Britain has yet to apologise for the massacre at Jallianwala Bagh. The film rescues Sardar Udham from being a footnote in the history of the British Raj. What it omits mention of was the two million who died in a needless partition.

Singh says the power of Kaushal’s talent lies in his deep knowledge of every character that he inhabits, his layered silences, his exquisite emotional intelligence, his supreme ability to melt into the interior life of each character that he plays, and his need to deliver brilliance no matter what. These are the aces in his quiver full of arrows. “With every performance, he excels himself, and yet I know, his best is yet to come. There is nothing he cannot do. His talent is limitless. He is always astounding. And may he remain so forever,” he says.

Kaushal says Sardar Udham is one film he will proudly show to his grandchildren. But having wrapped up two lighter movies, The Great Indian Family and Mr Lele, and getting ready to play Sam Manekshaw in a biopic, it looks like the list is going to expand quickly with many more movies.