Pixar’s latest film on the loneliness of old age is certainly no fairytale. But it gives us high quality animation, yet again 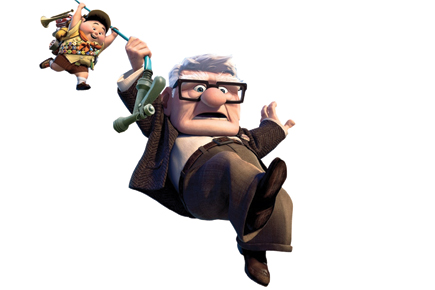 Pixar’s latest film on the loneliness of old age is certainly no fairytale. But it gives us high quality animation, yet again.


Walt Disney’s Pixar has come up with Up. It’s a computer animated story about adults, as told to children. The film unravels like a feature film with a complex narrative. It starts off with black-and-white ‘documentary footage’ (animated, of course) about a lost explorer/adventurer in the Charles Lindberg tradition. Our protagonist, Fredricksen, was a boy then and he shared his passion for adventure and travel with a little girl called Ellie, who grew up to become his wife, shared his life and then died to leave him old, lonely and very, very grumpy. Cinematically compressed and inventive, this introduction sets the tone for the high quality animation in Up.

Now the real estate developers are trying to evict the old man from his house, from Ellie’s home, and the old grouch refuses to leave. So before they send the bulldozers in, he ties a thousand helium-filled balloons to the house and flies off for an adventure, taking his home with him, just like a tortoise would. But as he heads towards his dream adventure, to Paradise Falls in South America, Fredricksen realises that he has an unwanted passenger. It is a pesky boy scout called Russell. Up is about the relationship between the grouch and the pest and the inadvertent fun they have along the way.

One would hardly think that the subject of this film, the loneliness of old age, would be suitable for children. There is almost a Dickensian perspective to the man growing old in a middle class neighbourhood, being harrassed and finally hounded out of his home.

Even aesthetically, the reference points would be obscure for kids. For example, when Fredricksen struggles to get out of bed in the morning and his bones creak, the background music is the famous piece from Georges Bizet’s opera Carmen, when the gypsy girl, Carmen, dances erotically for the Corporal, Don Jose. Of course, it is used ironically, and the point is elliptical, but this is supposed to be an animation film for kids—and the directors, Pete Doctor and Bob Peterson, seem to forget that sometimes.

Clearly, Up also has a certain tinge of hard reality that comes from the recession, particularly the collapse of the home loan business in the US, when home owners, old people like Fredricksen, were evicted because they couldn’t pay back their mortgages. This is not unusual. Walt Disney has a long tradition of its animation reflecting economic situations, a great example being the 1937 film, Snow White and the Seven Dwarfs, which turned the classic fairytale into a morbid expressionist take on the Great Depression.

A child can be sent to see Up, certainly, but an accompanying adult for the cinematic translation would be useful. Every now and then, the kid would have to be told what’s up.