‘This is the censored me,’ says Kalki Koechlin

Kalki Koechlin has always been a fearless voice. Her new movie deals with the complexities of urban relationships. Divya Unny meets up with a Bollywood original 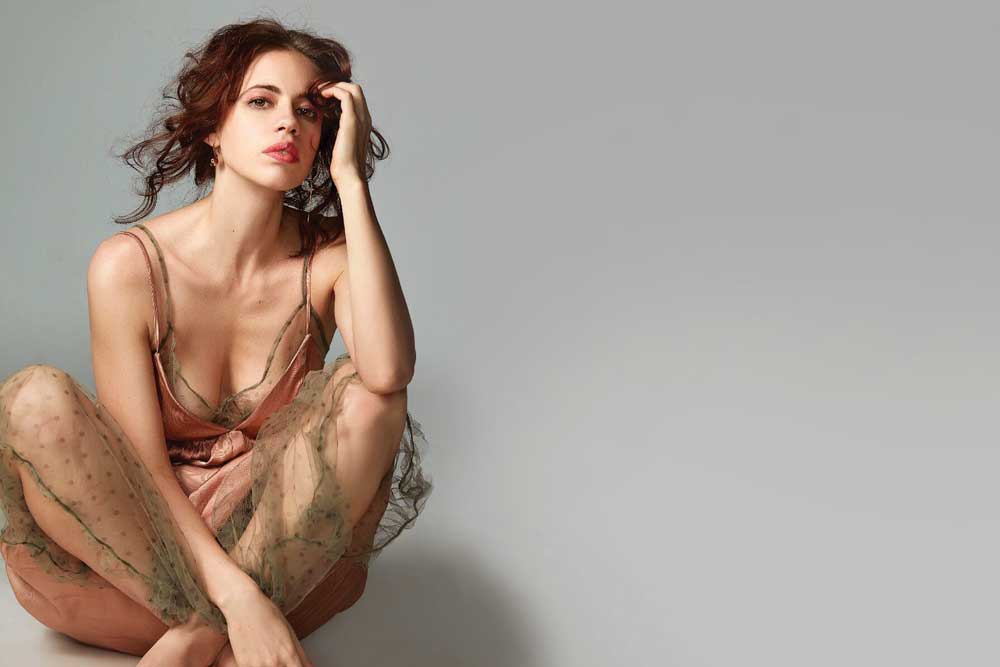 KALKI KOECHLIN’S FILM Ribbon is one of the most relevant recent Hindi films. The struggle of a young married couple living in a chaotic and sometimes brutal city forces us to take a good look at ourselves. Is today’s hyper-ambitious youth capable of holding a family together? Are we moving too fast to live the little moments in our lives? Is it only the woman’s job to sacrifice her professional goals to keep her home from falling apart? The film tries to find answers to many such questions, and aptly mirrors the confusion- ridden relationships of the urban space.

Ribbon is also perhaps Koechlin’s most believable performance since she entered the world of Hindi cinema eight years ago. Sitting on her couch with her feet tucked in, she opens the conversation with a gentle smirk, “Come come, this is my casting couch… my Weinstein moment,” she says, hinting at one of the biggest gender stories of our times. “Any issue becomes real when there is a whole group of people talking about it. That is the strength of numbers,” she says.

In a sheer white top with her hair pulled back, Koechlin looks happier than ever. Her film has resonated with people across age groups, and now she can’t begin to think how she almost gave up on playing the part of the strong headed yet equally vulnerable Sahana. “She’s nothing like me. I’m not a mother, not a wife, definitely not a middle- class girl working her way up the cut-throat corporate ladder. Yet I knew so many women like her, young mothers who are just expected to be superwomen. They have to cook, look after the house and of course they want to work. Why shouldn’t they? Because we don’t have the tradition of the male partner being in the house and doing domestic work equally? That’s not fair. These are such real issues to bring out in a story that I couldn’t let go of it. I said ‘no’ to the film initially, but then went back and told my director (Rakhee Sandilya) that I’m in.”

In the film she starts off by playing a woman who isn’t ready to have a baby, but ends up being a mother and dealing with the abuse of her little daughter. That’s quite an arc to achieve in the span of an hour-and-a-half, and there are moments where she drives the narrative singlehandedly. “I come from a world where my nine-year-old younger brother is always cooking in the kitchen and he is well aware of what menstruation or even menopause is. We talk about these things openly, but I realise most families don’t. I know that most kids won’t talk about the abuse they go through because they are not encouraged to. When I was younger, I did not have the courage to speak up either. But hopefully every little step we take is to change that,” she says.

Koechlin set an example three years ago when she came out and spoke about being sexually abused as a child. Many called it a bold decision. It got her both trolls and sympathisers. But a mainstream Hindi film actor speaking about such a sensitive subject made a difference. Today, as her own film takes on the issue, she remembers how difficult it was for her to speak up as a nine-year-old dealing with it. “We lived in a community in Auroville where everyone was very supportive of each other, but it was still a different time than now. At the age of six, I went to boarding school and was quite cut off from my parents. My mother came from a strict Catholic family and my father was from a high-class male-dominated bourgeois home. I couldn’t talk about it because I thought ‘I will get into trouble with my parents’ or that they wouldn’t believe me. In that sense, there were barriers when it came to emotional issues or behavioural patterns. But I can’t blame them because they didn’t know any better.”

She opened up to her family about the abuse that she went through after completing her theatre studies in London. “At 13, I turned into a rebel and dealt with it my own way. I took to art and theatre to find myself and it was my release in so many ways. I went through therapy and years later, after my university days—that is when I could reach out to my parents and tell them that I need them. Which is why it is so important for parents to create an atmosphere where the kid can come and express himself or herself openly no matter what the situation, and today’s parents have that choice,” she adds.

Why should a girl put her career on the line because some guy hit on her? It’s a power game. Guys are being hit on by powerful women too

She has always had fierce opinions, but is now more articulate than before. “This is the censored me,” she jokes when I ask her about her brushes with authority. Koechlin believes she hasn’t changed much over the years. Except in the past she’d often have her foot in her mouth. She was a rank newcomer who could speak little Hindi trying to make it in Bollywood, but always insisted on standing her ground.

“I’d go in for an audition and I’d have casting directors tell me to lose the thighs, or smile without showing my gums. I’d tell them, ‘This is my smile, take it or leave it.’ I had nothing to lose,” she adds. She feels she was never ambitious enough to feel intimidated by a stray comment or unwanted attention. “Today people talk about body shaming, but it’s been going on for decades. I slowly realised that it is a lookist industry and there are those pressures and everyone has to make individual choices of how much you’re willing to do. Good thing for me was that I hadn’t come here to make it no matter what. If things didn’t work out, I’d just go back to my family.”

But she didn’t have to. Today about 16 films old, Koechlin has established herself both as an actor an activist—and independent of each other. She doesn’t really need a film to be in theatres to speak about subjects she feels for, and neither does she go looking for ‘issue- based’ cinema. In Margarita with a Straw (2014), she played a girl with cerebral palsy grappling with her sexuality, and that was undoubtedly amongst the most complex women characters an Indian actor has played. But then in Zindagi Na Milegi Dobara (2011) she also played a rich bratty young girl whose life revolved around branded bags and foreign holidays. “My expression as an actor is different from what I feel for in my personal life. These are two separate things and keeping them separate helps. Anyway, why is a film always expected to educate the audience? Films don’t provide solutions. That’s not what they are made for. Life doesn’t provide easy solutions either,” she says.

ISSUES THAT MOVE her personally find space in her poetry and songs. She channelises her angst on paper and does so diligently. Every few months, she puts out videos as Kalki expressing her frank opinions on acting, gender inequality, harassment, racism, etcetera. Her video The Printing Machine has garnered over 1.7 million views. In one shot, she’s casually reading out messages she receives on Twitter: ‘You have such big teeth, get lost ugly’; ‘I will rape you bitch.’ It’s stark, disturbing and shows the vulgarity of threats and insults on social media. She cannot take them all on, but she’s putting them out for the world to see. “The last 20 years have been about educating the girl child. Now the girl child is an adult who is educated and is going out to work. Men are feeling threatened by it, especially the ones in smaller towns who have only seen their mothers and sisters walk with their heads down. Hence this backlash. Verbal, physical, emotional abuse. If I can face it, I wonder what a regular woman living with a family of five does to help herself,” she says.

She is among the few female actors in the country who pose such questions in writing. Her language is English and she realises she may not reach the vast majority of the country, but she believes it’s a start. “Even if I am reaching out to two people through a monologue, I believe it is good enough. You have to understand that before any of this becomes a social commentary, it is a personal fight. If I speak about something that I have not dealt with, I can never be honest with that subject. Today even if I’m addressing an elite crowd of women in Delhi about something like body and image, and two of them come up to me and say that they cannot eat at a party because people will judge them, it means I have triggered a thought in them. That’s all I’m trying to do,” she says.

Will the Indian entertainment industry see anything like the Weinstein fallout? She says, “I think it’s very tiring to ask a girl to be brave and come out on these issues. Why should a girl put her career on the line because some guy hit on her? It’s a power game. Guys are being hit on by powerful women too. Be it abuse of any kind, a group of people have to take the responsibility of bringing them down. It can’t be done by one person and when we find that strength of numbers in India, I’m sure people will think twice before dropping a young actress a text message at 2 am about what her plans are for the night.”

Both in artistic and personal expression, she feels like she’s in the best phase of her life. She feels like she has found a voice. “I could have screamed my opinions out even then, but nobody really would care a damn. Nobody was listening to me when I was a nobody and that holds true of any woman trying to make it on her own. Today, if I make a film of my own, I don’t know if anyone will watch it because it’ll be full of reality checks. Very ‘dark’ in the language of Bollywood. But I will, someday, just ‘cause I have so much to say.”