He has neither the looks nor the genes to back him, but Emraan Hashmi is quietly and surefootedly climbing his way up with one hit after another 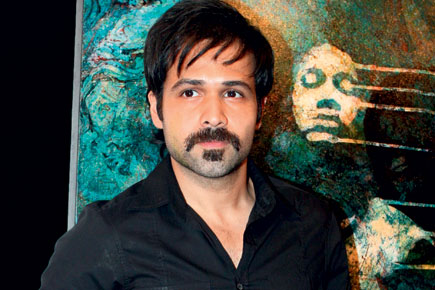 He has neither the looks nor the genes to back him, but Emraan Hashmi is quietly and surefootedly climbing his way up with one hit after another


In an age of hunky heartthrobs, there’s one actor who’s gently scripting a Matt Damon-like story of underdog success and quiet recognition. Emraan Hashmi has neither the genes nor the looks of Ranbir Kapoor or Imran Khan, but he’s got the numbers. His latest, The Dirty Picture, is on its way to blockbuster-dom. Holding his own against a formidable Vidya Balan, on whom the bio-pic is centred, and, of course, the inimitable Naseeruddin Shah, Hashmi’s presence in The Dirty Picture hasn’t escaped the sharp eye of critics. ‘Hashmi is appropriately restrained as Abraham, a director who believes in film as art,’ goes one review. Sample another: ‘Hashmi is good. The chemistry between him and Vidya is sizzling.’

Of his last five films, four have been bonafide hits, including The Dirty Picture, Murder 2, Dil Toh Baccha Hai Ji and Once Upon a Time in Mumbaai. In the latter, he stole the show from Ajay Devgn, an old and assured hand at playing gangster, with crowd-friendly dialogues like, “Saari duniya raakh ki tarah neeche aur main dhuen ke tarah upar.” In a career that began first as an assistant director before his switch to acting with Footpath, Hashmi has proved to be a consistent deliverer of hits with a success ratio of nearly 70 per cent, a Mr Reliable with single-minded clarity in being a hero with mass appeal.

“He refused to do Woh Lamhe because he thought it was too arty for his image. He knows his audience well. Every professional decision he takes is dictated purely by how his audience would react. His idea of cinema is commercial and edgy,” says his cousin and filmmaker Mohit Suri. It’s impossible to write about Hashmi’s trajectory without considering Suri’s contribution to his career. Save for Woh Lamhe, Suri has cast him in all his six films. They grew up together, as “Bandra boys” but without any of the trappings associated with film families. Although his uncles, Mukesh and Mahesh Bhatt, were in the movie business, and so was his grandmother, Hashmi never felt compelled to join them. “As a kid, he was interested in multimedia and animation. He was good at mimicry but we never thought he would become an actor. His earliest dreams were to get into either animation or film direction,” says Smiley Suri, Hashmi’s cousin and closest confidant. Mohit, however, isn’t entirely sure about that, “Emraan was six when he did commercials for Good Knight and Turbo Cycle. Somewhere, he did want to be an actor. He had been lying to us all along.”

His second film, Murder, with Mallika Sherawat, instantly established him as a ‘serial kisser’, an image that he shall have to spend the rest of his life shaking off. A part of his appeal is sleaze. Look at the characters he typically essays: grey-shaded, vulnerable, social climbers who are always ambitious. Kunal Deshmukh, who has directed Hashmi in Jannat and Tum Mile, believes the masses identify with him. “He doesn’t try and play a superstar. He knows his limitations. Film after film, he plays a very rooted, common man-like character who has the aspirations of a common man. He wants nothing more than the girl, money and success. He represents a little of who we really are. The struggle you see most of his characters go through is the kind of struggle that a common man undergoes every day,” he says.

“The fact that his characters have a shade of grey make him more human. His wants are very middle-class. In Jannat, he is a professional fixer, but his aspirations are justified at some level because he does it for his lady love,” says Suri, adding, “In Emraan’s case, it’s good to be a little bad.”

While there’s definitely a running thread that connects his films and characters, his career must also be viewed in the context of his status as a musical star. There’s enough evidence in Dev Anand, Shammi Kapoor and Rajesh Khanna to suggest that actors with chartbuster music behind them leave a lasting impact. “His songs are a craze. I have heard people say that only auto-wallahs play his music, but the fact is that his songs from Murder, Gangster, Aashiq Banaya Aapne and Jannat are everywhere—from radio channels to discotheques,” says Smiley.

Hashmi’s rise, according to Suri, cannot be ignored anymore. “He has made his career brick by brick. In these years, he has never overpriced himself and didn’t get carried away by success. He first wanted to earn the choice of doing good films,” says Suri, adding, “You can’t ignore him now.” In an earlier interview with this writer, Hashmi had said that his image doesn’t bother him. “I have a special rapport with my audience—they know me and like me. It’s not worth spending your time and energy thinking what your colleagues are doing or what image they have. It’s best to let them do what they are doing. I guess that’s what somebody like Ranbir or Imran is also interested in—do good work and go back home.”

At first an exclusive Bhatt camp hero, Hashmi is now spreading his wings. Filmmakers as varied as Milan Luthria and Dibakar Banerjee have exhibited faith in his work. “With Emraan, a strange phenomenon has happened,” says Banerjee, who cast him in Shanghai as a street-smart photographer. “Since he has done typically commercial cinema for Vishesh Films, he has endeared himself to the ordinary guy on the street. Other than Salman, Emraan is the only actor who the audience in small towns can identify with. It is people in the big city who have doubts about his talent; they think he’s not cool. They wonder how come we didn’t champion this guy, how come he’s making it big on his own, and how come he is moving ahead with movies whose common themes are sexuality, success and loneliness. Emraan’s success is a bitter pill to swallow.”

Adds Deshmukh, “He didn’t have Yash Raj or Karan Johar backing him when he started out. He did small films and consolidated his market. Let’s hand it to the guy.” In Mahesh Bhatt’s opinion, Hashmi has “depth, versatility and willingness to take risks”. He says, “There’s a difference between the elite media and the common people—the latter have taken him seriously. I saw him walk by a street the other day and he was mobbed.”