The Many Faces of Radhika Apte

‘I am drawn towards drama and volatility,’ says Radhika Apte 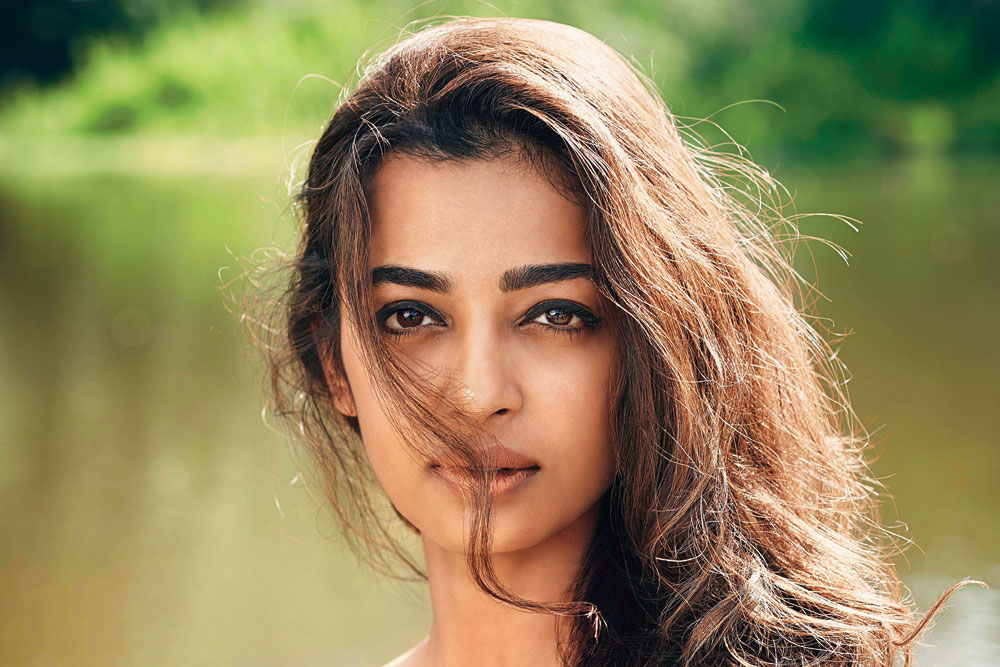 ‘LESS IS MORE’ was not exactly Radhika Apte’s motto in 2018. She seemed omnipresent—in a film, a web series, endorsements, doing interviews, or just being on set. Apte had more screen time in 2018 than many of our leading women actors combined. Proving her cachet—she’s the only Indian woman actor who has Netflix endorsing her with spoof commercials on social media, since she’s been on four of the platform’s latest Indian shows.

Apte’s growing popularity stems from the fact that even the fans of mainstream cinema have begun to recognise and appreciate her performances.With hit films like Padman and Andhadhun and shows like Sacred Games and Ghoul, the feisty 33-year-old actor has even drawn comparisons with Smita Patil. Apte, of course, though not oblivious to this exposure and adulation, is determined to not get too carried away.

“It just happened that all the films I shot, released the same year one after another. But I still think it’s too early to call it some sort of a ‘breakthrough year’. It will be a breakthrough if it reflects in the kind of work I am offered now, and that’s yet to be seen,” she insists. In a beautiful mustard dress, red lips and a low pony, Apte somehow pulls off this radiant yet natural look better than many others. She might be wearing heels, but she’s more than happy to kick them off and scooch into a chair with folded legs and a cup of tea. She might be sleep deprived this afternoon, but retains that sparkle in her eyes over the course of our conversation.

For a few years now, Apte has been shuttling between Mumbai (for work) and London (where her husband Benedict Taylor lives). As work increases, it becomes more of a struggle to juggle places. However, she feels no matter where she is, it’s a good script and a solid role that will always bring her back to the city where she began her film career. “Let me tell you that even today, despite what the world thinks, it’s extremely difficult to come across a script that really excites you. Something that would make you want to leave everything and stay on set, no matter how long it takes to get it right. Something like Andhadhun, where you feel like this is going to be an experience for me, and not just a few days of shooting,” she says.

She is also self-aware, and acknowledges the fickle nature of fame, admitting that it needs to manifest into something more tangible. She explains, “Yes, the six projects in 2018 were successful. Yes, the projects were different from one another, so it was great to be able to showcase different work, challenging work. But I’ve also done this in the past. I’ve craved to be on set. I have craved to work. I’ll take all the advantage of the publicity coming my way, but you have to be realistic. When I am leading a show I would understand why people are talking about it,” she says.

She declares her hunger for more performance-oriented roles repeatedly and unabashedly. Few actors would admit to this restlessness, even when they are at the top of their game. As an actor, Apte is real, and sometimes a little more than that. She seeps into the skin of her roles, and doesn’t necessarily leave her actual self out of them. She’s unafraid to improvise and retains her character’s vulnerability, keeping us connected with her story. Devoid of pretence or artifice, her characters stay with you longer than expected.

“The reach of digital platforms is worldwide and we are striving to create good content since we are competing with the best from across the globe,” says Radhika Apte

Apte was the best thing about Padman, a strictly average film. In a story riddled with cinematic liberties, she kept it real for us. Ditto with Sacred Games. A brilliant show with two male protagonists at the fore, Apte struggled for space in her role as a RAW agent, but managed to keep us hooked and wanting more. With Lust Stories, she destroyed all our perceptions about her as an actor. The moment we got comfortable with her, she gave us this obsessive woman who was almost maniacal in her insecurities. She says, “Every part you play has something relatable. The fundamental emotions never alter. You do try to derive those from your own experiences and imagination. Some of the parts I have read have moved me deeply, but so far it’s not been difficult to shake off. Like Mehak from Phobia (2016). With Sacred Games, the challenge was that RAW agents are supposed to be blank. Their thoughts and emotions don’t show on their face. Yet, I was the most powerful character in that show in an official capacity. So that was a challenge I really enjoyed taking on.”

She’s not competing with mainstream actors for box-office success, yet something about her personality makes her indispensable to the films she’s part of. In most cases, you can replace a Deepika Padukone with Anushka Sharma or vice versa, but it’ll be difficult to replace Apte. It’s a journey which began almost 10 years ago when Apte was in Mumbai sharing an apartment and attending auditions like any newbie. A trained Kathak dancer and an experienced theatre actor, Bollywood was all new to her. “It was scary to be broke and lost in a city that wasn’t even home. I remember the first film audition I gave was for Dev D (2009), for Kalki (Koechlin)’s role. It was intimidating, like auditions usually are, and I found myself not enjoying this constant need to pursue people for work. It’s still exhausting for me because this is a freelance business and you’re at high risk of joblessness. When I moved to London to study dance in the midst of this, was when my perspective shifted. I realised everyone has their own space. I was still scared, but I felt like I could hold my own even if I didn’t get any films,” she adds.

SHE STEERS CLEAR of discussing the numerous South Indian films she did, mainly to make ends meet. She battled everything from misogyny to mindless plotlines, but is not bitter about it. She sees it as an experience that taught her what she does not want to do as an actor. “There was a time I had a massive loan to pay, and there were couple of films offering me lots of money. Of course, I did them. It takes courage to say, ‘I will only do the kind of films I believe in.’ Today, I perhaps can say that, but who is to tell what happens tomorrow? You want to survive and live in a city, and if doing something for 30 days is going to give you that money, I would do it,” she says.

“Raw Agents are supposed to be blank. Yet, I was the most powerful character in Sacred Games in an official capacity,” says Radhika Apte

Manjhi: The Mountain Man (2015), Badlapur (2015), Parched (2015), are few of the landmark films in her repertoire. These films were not box-office gold, but proved the range of her talent. “I am drawn towards drama and volatility for many reasons. I do have an addictive personality and love the rush of adrenaline. Also my biggest inspirations come from people I meet and work with, so, yeah, good work keeps me healthier,” she says.

Her attitude towards herself and the roles that she chooses are fuelled by more than her passion for work. Her approach towards cinema is more universal and comes from the way she chooses to look at life and live it. Her perception of image and celebrityhood differ from her contemporaries. When she was younger, she was forced to quit a film because she was overweight. That experience changed a lot for her. “It’s exhausting for me to put on a face for the cameras. I can’t do it. But that incident made me realise that as an actor, you have to be prepared for a change of physicality anytime. That’s how agile and flexible one should be. But yes, I have never been one to endorse being thin or fat as long as one is healthy. And the fact remains that no matter what I say, the norm of beauty remains the same even today. It’s changing slowly, but stereotypes still rule,” she says.

With her choice of roles and films, it’s almost like Apte has create a parallel universe for herself as an actor of substance. She’s aware of the strength online content creators have brought actors like her who may not necessarily run after box-office returns. “When my film Phobia released years ago, nobody saw it. Lust Stories was on everyone’s fingertips in less than a day. That’s the difference today. What the digital platforms have done is that they have created a lot of opportunity for everyone. A lot of content is coming up. A lot of jobs, not just for actors, but for everybody. The reach of a platform like Netflix is worldwide and we are striving to create good content since we are competing with the best from across the globe. Now that’s empowering, and as long as the censors don’t interfere with it, there’s scope to do so much more,” she says.

She starts 2019 with a film called Bombairiya, about a city girl who gets caught up in a whirlpool of confusion after losing her phone. She’s also part of Sacred Games Season II. For Apte nothing much has changed in the last decade apart from the fact that she’s become more self-aware. “I am exactly the same as I used to be years back. If I feel something you’ll see it on my face. I speak my mind and it’s difficult for me to be so conscious of my words. When the MeToo movement began in India, it was so delightful to see actresses supporting each other. It’s a great time to be a part of the industry and I just want to continue doing better than I am.”