The Making of Kabali: Just Rajini 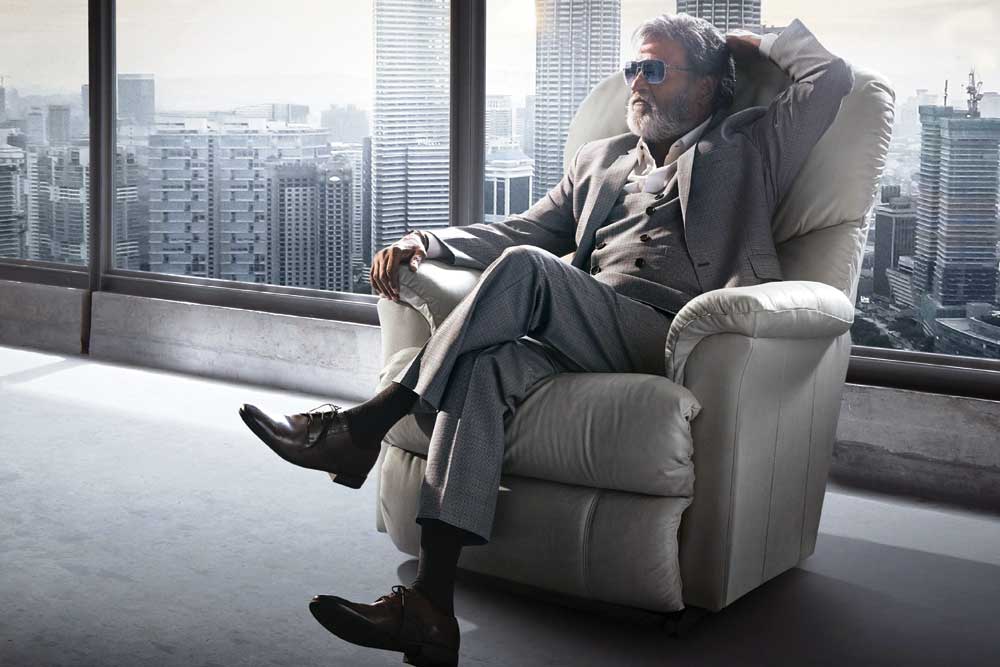 ON A RAINY JUNE day in Chennai last year, 37-year-old Thangavel Ramalingam met Rajinikanth for the first time. Not as a zealot whistling through one of his films first day, first show or part of a collegiate flock thronging his residence, but as a colleague. Ramalingam’s world had been thrown into ferment a few days ago when his classmate—from the Government College of Fine Arts, Chennai—and filmmaker Pa Ranjith, with whom he had worked on Madras, called to say that he had snagged a film with Rajinikanth. Ramalingam was to be the art director. “I couldn’t comprehend it at first,” he says. “I had not even fantasised about such an opportunity. I can honestly claim to be among Rajini sir’s biggest fans. Growing up in my hometown, Peravur, I screened Rajini movie marathons for the locals. In Chennai, I led his fan club for a while. So you can imagine how surreal it was for me.” Now, Ramalingam sat in the actor’s living room along with some of the cast and crew of Kabali, outlining the film’s lookbook. He had no idea, of course, that it would become the most anticipated film of 2016, setting off a chain reaction among corporates scrambling for a slice of its promotional pie and generating unprecedented frenzy on the Web. “Do something different,” Ramalingam appealed to his icon. “Your fans want you to.” The superstar, in white shirt and black veshti, seemed both anxious and excited to work with a young team in their thirties. “You remind me of the Mullum Malarum team from the 1970s,” he told them, in a rare moment of nostalgia for a simpler time.

No Tamil actor since MGR has enjoyed such insinuating power over the masses as Rajinikanth, the villain-turned- working class hero with an inimitable style that launched a million whistles and became a formula for his success. An older Rajinikanth has, for a while, wrestled with the obduracy of his stardom. Petrified in popular culture, he needed a bracing makeover to recapture the hearts of his fans. The story goes that he picked Ranjith not only for the potential he saw in his story, but also because the two-film-old director was the first to hesitate to take up a Rajini project. “Ranjith told him he wasn’t sure he could direct him, and Thalaivar, who really liked Madras, was bowled over. He said, ‘Ranjith is my director now,’” says a crew member.

Ranjith’s reluctance is not unwarranted. His last film, Madras (2014), was gloriously uncinematic in the way it portrayed a much-reviled Chennai neighbourhood. Even minor characters were imbued with capricious energy in a film where the script was the one true star. Now how would Ranjith direct Rajinikanth, a nimbus that could potentially wash away some of his narrative firmament? This was an actor who had committed various cinematic affronts over the past few years—as a robot with a bouffant in Enthiran, a CGI character in Kochadaiiyaan that came nowhere close to bringing the young Rajini to life, and a vapid saviour in Lingaa, arguably his most cringe-worthy film to date. Rajinikanth was a depleted diva in search of box office redemption. “People want to see me as Ravan more than Ram,” he told the Kabali team.

After Baasha, this is the first Rajinikanth film I am excited to watch first day, first show

Kabali is Rajinikanth’s effort at detente with a loyal audience that is ready to forgive his worst lapses in exchange for one more blockbuster. The badass title, big ticket promotions including Air Asia’s special flights to Chennai featuring posters of the film, and a teaser fuelled by the musical blaze of Santhosh Narayanan’s by-now-iconic Neruppu Da and the bass of Rajinikanth’s voice have stoked expectations. “After Baasha, this is the first Rajinikanth film I am excited to watch first day, first show,” says Vetrimaaran, a National Award-winning filmmaker who makes ‘real’ films in an industry accustomed to escapism. “The teaser sends a clear message: Kabali is a classic Rajinikanth film, with some of the flavour of his old family entertainers that came packaged with a message. Very few films work across geographies and languages, and this looks like it could be one of them,” says Sabu Cyril, an art director who won a National Film Award for Best Production Design for Enthiran (2011).

The cast and crew of Kabali bill it as a mass entertainer that still tips its hat to realism. Playing his age as a Malaysian don, Rajinikanth sports his natural beard and wears little makeup in several scenes. “We even toyed with doing away with the wig but fans may not have liked it,” says Ramalingam, who admires Rajinikanth for his offscreen simplicity. “I feel that the more his character reflects his real-life personality, the audience will relate to it better. Somewhere down the line, we all became attached to the man he is, and grew up with him.” Technicians and actors say Rajinikanth is a true hero on the set, working hard, making conversation with minor artistes and spot boys, with none of the breezy insouciance of his celluloid characters.

He is a paradox if there was ever one in Tamil cinema. An ageing man with scraggly hair and an unfailingly good temper, he transforms onscreen into an invincible hero and over-the- top style icon. He is a phenomenon who seems incredulous of his own larger-than-life stardom and rarely steps outside his comfort zone to deliver good cinema. Punch dialogues and a messiah complex are characteristic of his oeuvre, but he has delivered some of his most memorable performances portraying deeply flawed characters in such films as J Mahendran’s Mullum Malarum (1978) and K Balachander’s Avargal (1977). “If the director was capable, he could extract a good performance from Rajinikanth. But this changed with time, as he became a superstar and stuck to formulaic roles that were written for him,” says film historian Theodore Baskaran. Today, the ruthless mechanics of Rajini’s brand of commercial cinema wouldn’t allow for even a partial dissolution of his onscreen heroism. Baskaran attributes Rajinikanth’s success to the “utter lack of film appreciation among Tamils”. “MGR, too, was a ham actor who could not emote, but went on to gain immense popularity. With no attempt from any quarters, government or academic, to promote an ability to appreciate cinema, we created an audience that receives cinema purely at the sensory level. Dance sequences pander to their voyeuristic side. Chases and fights defy the logic of space and time. The paralysis of threadbare plot and dismal supporting performances lifts only occasionally, in films like Thalapathi (1991),” Baskaran says. “But there is fresh wind blowing now. Independent films like Kaaka Muttai (2014) and Onaayum Aattukkuttiyum (2013) have tasted commercial success.”

Ranjith is a product of this brave new world and it will be interesting to see how he can help Rajinikanth break his own mould. “In many ways, Kabali is a bridge film, with both commercial elements and a subtlety that is ingrained in Ranjith’s filmmaking,” says G Murali, the film’s 39-year-old cinematographer. “Rajini sir is a good performer. I wasn’t a fan before, but I have come to admire him after following him around with a camera for several months. It is just that most directors exploited his style rather than his acting skills.” Kabali is not a cliche-ridden entertainer focused on a crime boss, says Murali. “It deals with the don’s struggle to get equal pay for Tamil migrants in Malaysia and has a strong emotional element,” he says. Smaller performances have been showcased well in the film, he adds. Most of the cast and crew, including Murali, are carry- forwards from Madras. “We are all exposed to world cinema and inspired by it. But we know Tamil cinema is not like that.” Murali is a realist who prefers to avoid visual exaggeration. “If someone says that a scene is beautiful or that it stands out, then I have failed. If visual tools pop up in a scene prominently, it is bad cinematography. I have tried to stick to this principle for Kabali too,” he says. “If this film is a success, we should see Rajinikanth in a new innings,” Murali says, crediting Ranjith for his smooth direction. The star reportedly loved the first cut of the film.

If this film is a success, we should see Rajinikanth in a new innings. Kabali is a bridge film, with both commercial elements and a subtlety that is ingrained in Ranjith’s filmmaking

Although producer Kalaipuli S Thanu declined to comment on the budget for the film, estimates peg it upwards of Rs 150 crore—a sum he will easily recover several times over. Ahead of its release on 22 July, the film has already made over Rs 250 crore in language and satellite rights and marketing deals with brands like Cadbury, Airtel, Ola and Muthoot Finance. “Kabali is likely to best Baahubali’s record of Rs 500-plus crore earnings and change the way the world looks at Tamil cinema,” says the owner of a multiplex in Chennai on condition of anonymity.

The cast and crew of the film say no expense was spared, no stone left unturned in set and costume design. A Thailand pub scene was painstakingly recreated at Mohan Studios in Vadapalani, Chennai, based on the set design team’s photographs of the original location. A market street in Malaysia had to be simulated too, using native materials, food, drinks and clothes for authenticity. “Travel approvals came in minutes,” says art director Ramalingam. “We have tried to make the transitions between locations and through time very real and seamless.”

I feel the more his character reflects his real-life personality, the audience will relate to it better. Somewhere down the line, we all became attached to the man he is

These small details will, of course, be subsumed under the aura of Rajinikanth. “He has to be represented in a certain way because that is what audiences expect,” says a veteran filmmaker who helped mould Rajinikanth’s career, directing him in several films. He refrains from commenting on Kabali, other than to observe that the retro look in the flashbacks is reminiscent of classics like Johnny (1980). “There is so much at stake in a Rajini film. I don’t want to say something that will make it any worse for the director,” he says. Over the years, as the star’s image grew, the film and the filmmaker receded into the background. One filmmaker who directed Rajinikanth in an iconic film from the 1990s says he is rather tired of talking about the Rajini phenomenon. “You don’t direct Rajinikanth; he happens to you,” he says, laughing. “The story is incidental. The title, the fight scenes and the punch dialogues are the key to cracking the market.”

Meanwhile, comparisons to Baasha (1995), a gangster flick that fans consider to be the definitive Rajinikanth film, are pouring in. It was the film that catapulted the star to unimaginable glory, and the similarities could bode well for Kabali. Most of all, Kabali will be a test of a superstar’s readiness to embrace his humanity. Rajinikanth’s enormous reputation is a sail that has weathered many storms but it is not without a few tears. As it billows and blows in the wind, one can only watch and wonder what it is made of.