Madhuri Dixit claims she is boring and non-controversial in her real life but does not mind boldness in her roles. That is what drew her to Dedh Ishqiya 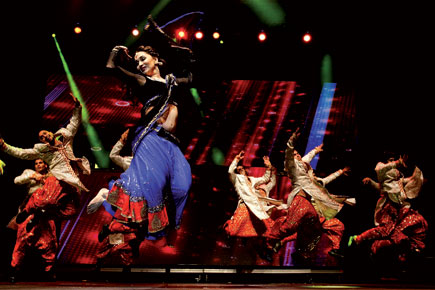 Madhuri Dixit claims she is boring and non-controversial in her real life but does not mind boldness in her roles. That is what drew her to Dedh Ishqiya

Big wavy curls, flouncy dresses paired with tight waistcoats and oversized plastic hoop earrings—just how could Madhuri Dixit forget that phase? She was shooting a melodramatic love story 25 years ago with the nation’s heartthrob Aamir Khan in the same dusty Mumbai studio that she’s in now, talking about love all over again with her new movie Dedh Ishqiya.

This is a sleeker Dixit, in a body-hugging black sheath that ends above her knees, seated on a swivel chair on Floor No: 7, a bare, soulless room at Mehboob Studios. “The first film I shot here?” The memory is hazy, the look in the 46-year-old heroine’s eyes faraway. “I’ve faced too many questions today…difficult to remember. I don’t usually look back. It must have been Dil.”

Dixit isn’t given to bouts of nostalgia. She’s forever moving forward, embracing change. The actress did a saucy dance number Ghagra with Ranbir Kapoor in 2013’s blockbuster Yeh Jawaani Hai Deewani, despite being his father Rishi’s heroine in Sahibaan (1993) and Prem Granth (1996). She wholeheartedly romanced 63-year-old Naseeruddin Shah in this month’s Dedh Ishqiya, even though her older co-stars Shah Rukh Khan, Salman Khan and Aamir Khan are now paired with actresses half her age. Does it rankle? “Yes, revenge of the women—we must start romancing younger men,” she jokes, then gives a prosaic answer. “It’s always been that way. Heroes go with what works for their projects. They also get paid more. It’s not just in films, though. You see discrimination in every field. Women have to work twice as hard and nudge others out of the way to the top. They have to make a place for themselves.”

Dixit has made her place again. It may not be the superstardom that she and arch-rival Sridevi once enjoyed in the 1990s, but she’s resuscitated her career. After living in Denver for a decade, Dixit shifted back to Mumbai in 2011 and got out of full-time mommyhood with a vengeance. Two successful seasons as a TV reality show judge in Jhalak Dikhhla Jaa, two films in 2014, brand endorsements of Ayurvedic chyawanprash to toothpaste to anti-ageing cream, as well as an online dancing school. Thirty years after she made her debut in Abodh, Madhuri Dixit still sells.

Dixit’s work ethic, coupled with the fact that she’s always been very proper, have contributed to her success. She faces the media barrage with equanimity, flashing her singular smile when questions from television journalists tumble out together in an incomprehensible rush. When I speak to Dixit later, there’s a schoolmarmish, rehearsed manner with which she takes on questions, resembling the practised tone she had during our last interview a decade ago when she was on a visit from Denver. Her hands lie on her lap in a neat cross, and unlike other stars, she doesn’t fidget with her phone, discuss box office figures or gossip about who’s sleeping with whom these days. “I’m a non-controversial, boring person,” she explains, “I don’t say bad things for effect. I like positivity in life. I’m excited [while] acting and dancing. Otherwise, I keep to myself and mind my own business.”

Dixit didn’t have the ‘ice maiden’ nickname that Aishwarya Rai sported, but she does reserve her emotions for the camera. Over the years, colleagues and journalists say they’ve scarcely seen her throw a tantrum. She barely lets even bad weather or lack of sleep get to her.

“She doesn’t behave like a diva,” says her 27-year-old co-star Huma Qureishi. “Actors have those awkward moments when you’re waiting for the shot to get ready and you’re thinking of the scene, so you don’t want to chat. Madhuri would often be humming to herself. It was like I had found a kindred soul. We’d hum together.”

The star won the Filmfare Best Actress awards for both Dil (1990) and Beta (1992), yet her director Indra Kumar reveals that she was at an all-time professional low when he signed her on. Kumar remembers a more reserved Dixit, one who opened up slowly during the Dil shoot. Back then, the actress revelled in the dramatic scenes and dance numbers, and seemed uneasy performing comedy. “When I signed Madhuri for both films, people asked me, ‘Have you gone mad? This girl is jinxed. She’s had eight flops in a row.’ I just felt she was a brilliant actress. I began shooting both films simultaneously—Dil from 14 October 1988 and Beta on 27 October. Madhuri was never depressed by the flops, but she was determined to succeed. In December 1988, Tezaab released, then Ram Lakhan in January 1989. Madhuri became a big star even before Dil released.”

She may be patient to a fault, yet Dixit confesses she’s grateful for the changes she’s seen in movie-making over the last 30 years. “There were no vanity vans and we sat in the sun for hours, under those umbrellas. Now there are bound scripts, costumes and storyboards so you can see how the film will be shot. And thank God for sync sound,” she exclaims, looking heavenwards, “We had to dub in a studio and it was like doing the entire film all over again. But we only did four interviews back then. It’s different now, there are so many distractions. You have to make a noise for your film to be heard over this din.”

It was the novelty of her character Begum Para that persuaded her to sign Dedh Ishqiya after a seven-year film hiatus. Dixit was taken in by Vidya Balan’s role when she first saw Ishqiya in 2010. “She was so bold and there was no explanation for why she was like that, no ‘mera ek beemar bachcha hai’ excuses. That was wonderful because it made her real. She wasn’t an avenger, a victim or just eye-candy. These are the three slots that we are often put into. Ishqiya broke all that.”

Dixit and her cardiothoracic surgeon husband Dr Shriram Nene moved back to Mumbai because they wanted their sons Arin, 10, and Ryan, 8, to grow up with Indian values and culture. She has a deep devotion towards Kathak and reveals that there was a time when she learnt to read and write a bit of Urdu because of her fondness for the poetry of Mir Taqi Mir, Mirza Ghalib and Faiz Ahmed Faiz.

Qureishi says this filters down to her sons. “It was sweet to see her boys play tabla at a memorial for Madhuri’s dad [who passed away in September 2014].” The star says she was worried about whether her kids would miss Denver— the parks, skiing and snow-boarding—but they’ve “settled down so nicely, touch wood”.

She’s amused when asked if they’ve grown used to Madhuri Dixit, the mom. “I like the touch of innocence that they have. They used to come running, yelling, ‘Mum, you’re on TV.’ Now they say (sounding bored), ‘Ma, you’re on TV’ and go back to what they were doing.”

You’d imagine that the greater adjustment has come from her husband Dr Nene, who now manages the couple’s online venture, RnM Moving Pictures. Apart from online classes where Dixit teaches various dance styles from Salsa to Navratri, the two plan to launch a health portal in 2014 that bridges the “patient-doctor gap”. Yet it must have been difficult, giving up a life of anonymity, being mobbed so often. Dixit is embarrassed as I bring up the incident when she wrapped her face in a scarf on a visit to the Taj Mahal. “Oh that, it was funny. We went to the Red Fort in Agra, but were followed by thousands of people. So when I went to the Taj Mahal, I covered my face. I didn’t want to spoil the vacation for other visitors. We didn’t know that there was a cameraman, clicking away to glory. Jaane doh,” she says, with a flick of her hand.

Apparently, Dixit has struck a balance, even hammering out a comfortable working equation with the husband. She’s able to rattle off tips for a happy married life as if she’s given it enough time and deep thought. “No egos, lots of communication. Always remember that you are fighting for the same goals, happiness and prosperity. Have plenty of fun and forget small squabbles,” she says animatedly. In Dedh Ishqiya’s trailer, the seven stages of love are listed—attraction, infatuation, love, reverence, worship, obsession and death. I ask Dixit in which stage she’d place herself. She throws her head back in full-throated laughter and it strikes you as a wonderful sound. “Some people would say that after shaadi comes maut. [But] to me, it’s mohabbat—with your husband, kids, parents and friends.”