What makes us who we are? Increasingly in popular culture it is who we are opposed to 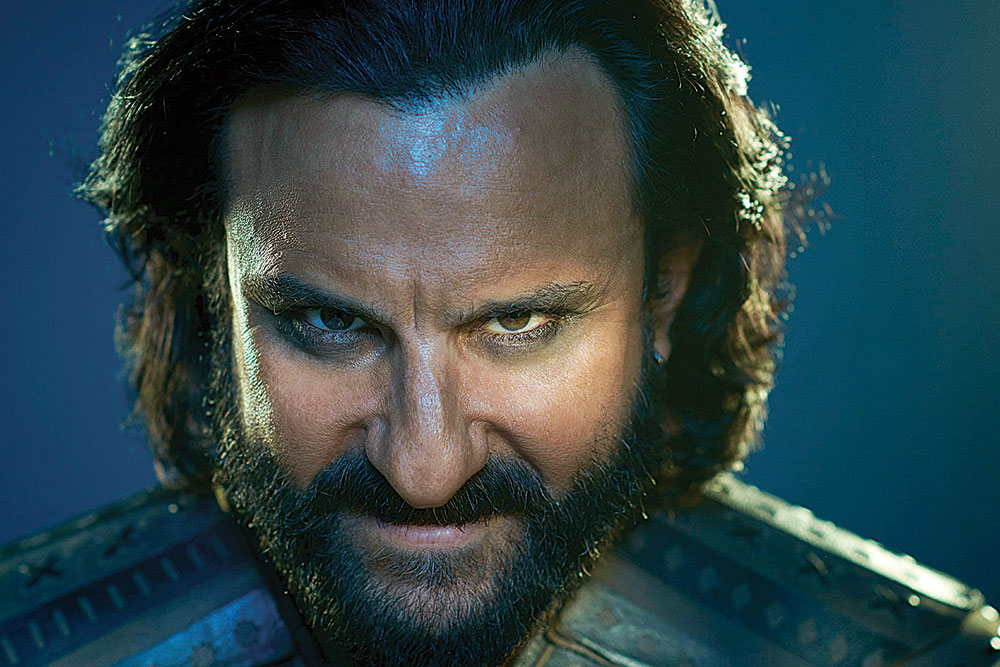 
KARAN JOHAR MAY well have given Prime Minister Narendra Modi a written undertaking that he, and other filmmakers of note, would be making ‘inspiring content’ to celebrate 75 years of Independence in 2022. But for that directors will first have to decide what this content is to be and which national identity will it acknowledge. Will it be, as it has been in the past few decades, only in opposition to the other, which keeps changing over time, or will it be an affirmation of the many identities we all carry, caste, class, religion and gender? Call it the fear of small numbers or the psychic tyranny of the minority, the national identity is posited in opposition to a specifically defined community.

If it was the homosexual man in a repressed society, it became the Western/Westernised woman in a newly independent India trying to find its own imprimatur. Of late, as society becomes increasingly divided, the Indian Muslim, or his sympathiser, has to bear the brunt of solidifying the notion of nationalism, whether it is movies such as Tanhaji (2020) or ads such as the recent Tanishq promotion where a Hindu woman married into a Muslim family was dubbed love jihad and trolled on social media.

At different points in our history, Hindi cinema has served different ends. The Nehruvian consensus of the 1950s made way for a certain exploration and adventure in the 1960s and 1970s with the rise of independent women. The unease with them usually manifested in their representation as either vaguely Anglo-Indian such as Helen’s dancer character in Teesri Manzil (1966), who is blonde and fair unlike the heroine Asha Parekh, or like Anita, in Deewar (1975), whose first appearance is clad in a slinky dress, smoking and making the first move on the hero. Both get shot because of their proximity to the hero, which according to film scholar Geetanjali Gangoli, is one way of resolving the fascination of the colonised Indian man for the coloniser. Equating the Western/Westernised woman with vamp/prostitute was both an act of defiance and cultural superiority.


In the case of actual white women, beginning with the generous Elizabeth of Lagaan (2001), who is said to have remained unwed all her life like Radha as a tribute to the love of her life, Bhuvan, the attitude was quite different. This was echoed in Rang De Basanti (2006) as well, when Alice Patten’s passionate film student is forever in love with the memory of DJ (Aamir Khan). It spoke of a newfound sense of confidence of the country’s place in the world, even though the Indian man was never quite united with the white woman, she remained deeply connected to him in her lifetime.

The Indian Muslim, or his sympathiser, has to bear the brunt of solidifying the notion of nationalism, whether it is movies such as Tanhaji (2019) or ads such as the recent Tanishq promotion

Women’s sexuality remained problematic and there was enormous discomfort with the emergence of the unwed mother. If in Dhool Ka Phool (1959), Yash Chopra’s directorial debut, a scared Mala Sinha abandons her illegitimate child in a forest, by 1978, Waheeda Rahman raises her child by herself, asking for nothing from the tycoon lover who abandoned her. That it leaves a permanent scar on their son, Vijay, who spends the rest of the film trying to avenge his mother’s dishonour suggests there was still latent ambiguity about something that movies such as Kundan Shah’s Kya Kehna (2000) and R Balki’s Paa (2009) made most acceptable.

Dinesh Bhugra, Professor of mental health at King’s College, London, believes national identity has changed over the years in reference to the other. “I am male because you are female. I am sane because you are insane. The creation of the other is both social and personal and a result of prejudices and long-held beliefs,” he says. Over the years, the other has been manifested in various ways. In the sixties, films such as Dosti (1964) and Sangam (1964) showed sublimated homosexuality. While Dosti showed the love between Ramu and Mohan, who had the added disadvantage of physical disability, Sangam, many have argued, was an extended friendship between the characters played by Raj Kapoor and Rajendra Kumar, with Vyjayanthimala’s character coming between them. Even in Kal Ho Na Ho (2003), it could well be that Preity Zinta’s character was extraneous to the relationship between the characters of Aman (Shah Rukh Khan) and Rohit (Saif Ali Khan). And of course, Aman had to die. Nikkhil Advani, the director, says there was no mystery to it. “It was the idea of everlasting love, living on even after death.” It was not until Dostana, in 2008, that a gay couple made it to mainstream Hindi cinema, albeit in a comical way.

In the seventies, with the rise of women in the public domain, the westernised woman took the place of the vamp. Often the westernised woman would be eliminated from the screen, as was Anita in Deewar. At other times, she was rapidly Indianised through the change in her clothing within the same film. The trend continued in the ’80s and early ’90s, with Sridevi and Madhuri Dixit often carrying within their screen characters this conflict between modernity and tradition. It could be Sridevi playing Anju and Manju in Chaalbaaz (1989), the meek and smart twins who look out for each other and are the ultimate male fantasy. It could be Ganga in Khalnayak (1993) who is as much seductress as a police officer devoted to her Ram.

The rise of terror in India, with the Babri Masjid demolition and the consequent serial bomb blasts in Mumbai in 1992-1993 also saw the rise of a powerful other—the ‘bad’ Muslim. Until recently the ‘bad’ or misguided Muslim would always be balanced by the ‘good’ Muslim whether it was Sarfarosh (1999) or Fanaa (2006). So for every Gulfam Hassan, Muhajir ghazal singer maddened by the Partition, a line drawn by an Englishman in the sand, there is a Zooni in Fanaa who thinks nothing of shooting down the father of her child because he is a traitor.

But of late Hindi cinema has decided demonisation is the better part of displaying diversity. Cut to Alauddin Khilji’s representation in Sanjay Leela Bhansali’s Padmaavat (2018), where the Muslim ruler is seen beheading his father-in-law, tearing into his chicken and generally behaving like Khal Drogo’s offspring. Unlike the domesticated Akbar of Jodhaa Akbar (2008), Khiljji is shown as a brutal invader who can never unite with his queen, who chooses mass jauhar over dishonour.

The unease with independent women usually manifested in their representation as vaguely Anglo-Indian such as Helen’s dancer character in Teesri Manzil (1966), who is blonde and fair unlike the heroine Asha Parekh

EVEN THAT IS not enough in these divided times. Those who work for the Mughals find themselves painted in the same brush, literally in the case of Uday Bhan Rathod in Tanhaji (2019), who wears all black, throws hot water on prisoners, relishes crocodile meat and thinks nothing of dismembering elephants. All this while a clearly foreign-looking Aurangzeb clicks his knitting needles and dreams of capturing the whole of Hindustan.

Movies such as Mulk (2018) have shown a greater complexity of the Muslim experience, from the law-abiding police officer to the staunch secularist patriarch to the angry young militant. But it is a narrative that does not fit in with the Hindutva idea of the other. Little surprise then that the invisibilisation of the Muslim may well be the next step, as is evident from the outcry over the recent Tanishq ad which showed a Muslim family conducting a traditional baby shower for their Hindu daughter in law. A savage response by right wing trolls got the jewellery brand to pull the ad. In Dolly Kitty Aur Woh Chamakte Sitare (2020), both the Muslim characters, Osman and Shazia, end up shot dead. Says writer-director Alankrita Shrivastava of Osman’s death: “From the moment he was born in my thoughts, he emerged as a character who would die at the end. And his death would be a catalyst for Dolly to finally free herself. I think there is a deep cynicism that has set in inside of me. We are no longer a country where religious divisions don’t matter. We are a majoritarian society now. The dark polarisation of society stares us in the face, and we can’t escape it.” Indeed, a Surf Excel ad in 2019 that had a young girl protecting her Muslim friend from getting splattered with colours met with the same kind of hostility online as the Tanishq ad, shrinking the space for multiculturalism onscreen.

Not every community that has long been ‘othered’ by Bollywood has done so badly. The community broadly known as hijras or transgenders has slowly emerged from the shadows in Hindi cinema, as indeed they have in real life, with the Supreme Court recognising them as transgenders in 2014. A study of 29 films by Gurvinder Kalra and Dinesh Bhugra divided the representation into five categories: hijras as figures of fun, passing references, sociocultural puppets, as villains and as sensitive mothers. The study suggested that there was a paradigm shift in their move from the margins to the mainstream, as in the forthcoming Laxmmi Bomb, starring Akshay Kumar.

Dalits, in a string of movies from the scathing Court (2014) by Chaitanya Tamhane to the witty Serious Men, directed by Sudhir Mishra, find themselves represented as the oppressed. But a community that refuses to be defined by defeatism. The poet in Court does not accept the ludicrous argument that his song lured the manual scavenger to kill himself, while in Serious Men, Ayyan Mani sees his own caste status interwoven with his class and wants to find the quickest way from 2G to 4G, a generation which has sweated so much that its offspring can live in comfort through their lifetime. Because nothing establishes an Indian’s identity than wealth. It is one marker that overcomes all diversities and disparities.