The perpetrators, victims and warriors of cyber crimes make for compelling onscreen drama 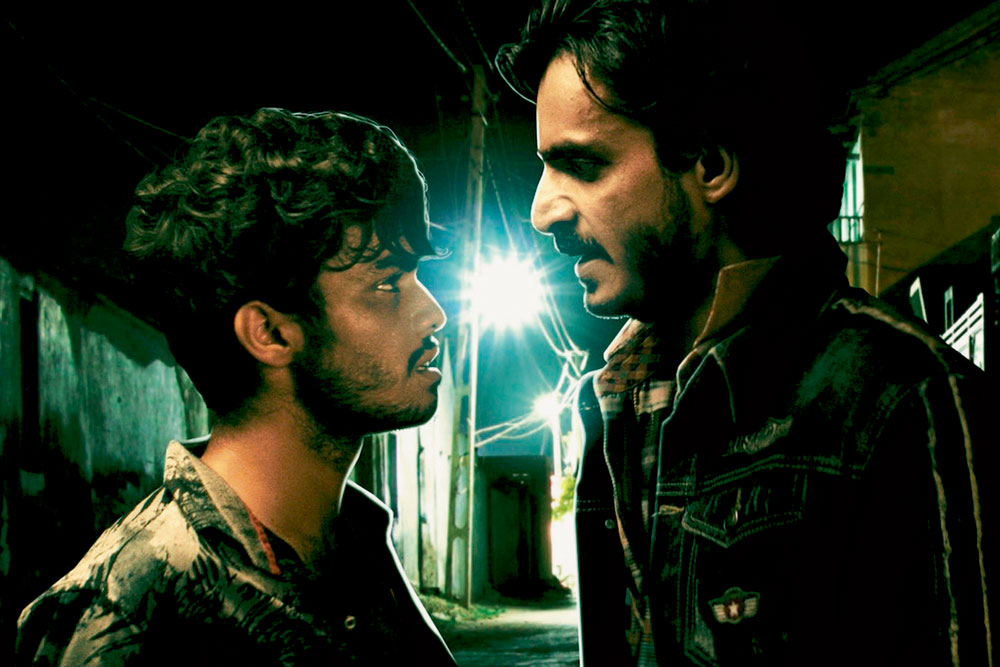 A scene from the Hindi series Jamtara: Sabka Number Ayega


Towards the beginning of the Tamil film Chakra (which released theatrically on February 19th), there’s a sequence of rapidly cut scenes that show us the consequences of planned data theft. On August 15th, 2020, 50 houses across Chennai were robbed in a coordinated attack—the robbers targeted residences where senior citizens lived by themselves. The police deduce that these addresses (and the fact that these seniors lived by themselves) were acquired via one big data grab: it turns out that in all 50 cases, senior citizens had used the same app to hire an electrician or a plumber or some kind of handyman. The hacker-robbers had broken into the app’s database and filtered the list to pinpoint houses whose residents wouldn’t put up a fight even as their valuables were robbed in broad daylight.

Sounds too far-fetched for your taste? Chakra, directed by MS Anandan, does lay it on thick. The protagonist, an army officer named Chandru (Vishal), doesn’t know a line of coding, yet ‘cracks’ a password-protected digital wallet. And yet, the cybercrime against senior citizens shown in Chakra appears to have been prescient.

Last week, Indian media reported that Facebook had suffered a data breach and that over 500 million accounts worldwide had their phone numbers and email addresses leaked. One of the theories being used to explain this breach was that a Telegram bot exploited a weakness in Facebook’s login system to scrape the data off a third party’s ‘contact import’ feature: in other words, the breach happened when people tried to login to a different app (like the ones used to hire handymen by urban customers) using Facebook credentials.


Chakra is hardly alone when it comes to depictions of homegrown cybercrime. At the same time of its release, the Malayalam film Operation Java also opened in theatres and soon, received rave reviews for its realistic and fast-paced stories involving phishing, online blackmail, piracy etcetera (the film follows the exploits of a newly-formed cyber cell). On March 12th, MX Player released the first season of Chakravyuh (starring Prateik Babbar), a Hindi cybercrime thriller based on a 2014 novel, Anti-Social Network, by Piyush Jha. In the show, the muscular Inspector Virkar (Babbar) matches wits (and frequently, fists) with a group of criminals who use dating apps for a catfish scheme: date-raping women and then blackmailing them into ‘out-call’ prostitution using the footage of the rape (for good measure, all financial transactions are done via cryptocurrency).

In January 2020, Netflix India released one of its better Originals, a Hindi series called Jamtara: Sabka Number Ayega, named after the Jharkhand town which has emerged as one of the hubs of phishing in India. In August 2019, ZEE5 released director Vishnuvardhan’s Tamil web-series Fingertip; starring Akshara Haasan, this too was an anthology show that tackled a different kind of cybercrime with every episode.

These shows and films have certain elements in common (apart from cybercrime itself): for example, most of them emphasise the fact that India needs an all-new, updated set of cybercrime legislation. This is a fast-changing world, and the legislation has to keep pace with crime for law enforcement to be effective. Both Operation Java and Chakra state this explicitly in their respective first halves (‘What are we supposed to do if they come out after two months of prison or a thousand-rupee fine?’ a senior officer laments in Chakra). Also, most of these films use the generational divide as an important plot point. Basically, criminals, tech-savvy or not (the criminals in Jamtara are mostly uneducated young men, for example), exploit the fact that older folks are often unable to negotiate the complexities of technology.

In Chakra, we see how senior citizens are perplexed at the fact that a utilities app could have aided the theft of their houses. In Jamtara, most of the older victims are duped by those offering them freebies that don’t exist—the ‘bank employee’ on the phone tells them they’ve won a lottery, or that they are the 100th customer of the month and they will be rewarded with an appliance of their choice.

The generational divide angle is emphasised, moreover, by making youngsters don the role of the ethical hackers. The pioneer in this was, of course, the Milind Soman-starrer 16 December (2002), where a 13-year-old works alongside senior Indian Revenue Service and intelligence officers to foil a terror plot in New Delhi.

The recent occupants of the cybercrime canon seem to take their cues from this: Chakravyuh features a 20-something ‘black hat’ hacker called IP (Anjali Sivaraman) working for the police (this is uncanny because in the real world, ‘black hat’ is a prefix adopted exclusively by programmers who flaunt their law-breaking). The other hackers on this show are even younger, like the baby-faced Richard (Rohan Joshi from the 2019 film Axone).

Similarly, the beating heart of Operation Java are two young men who have nothing to do with law enforcement, at least initially—they are fresh engineering graduates (computer science, obviously) who’re looking for a steady job with a respectable paycheque. Antony (Balu Varghese) and Vinay (Lukman Lukku) are both compelling characters because of their honesty and candour. We are shown interview clips where the two say lines like, ‘My biggest flaw is that I work too hard sometimes.’ We see how they are frustrated with the job market, but never bitter.

The beauty of Operation Java is the way it shows cyber-criminals as one step ahead of the outdated, law enforcement machinery

Much later, Antony and Vinay have a conversation where they talk about the country’s education system and how everybody wants them to do an MBA and find managerial jobs. But who’s looking out for youngsters like them, who want their education to mean something, who want jobs that use the skills they’ve acquired through years of studying and practice? Up until now, Indian cinema has restricted questions like these mainly to clichéd Bollywood fare like Aamir Khan’s 3 Idiots (2009), based on the Chetan Bhagat bestseller Five Point Someone.

The beauty of Operation Java is the way it incorporates overarching themes like this one within its core concern: the rise of cyber-criminals who seem to be perpetually one step ahead of the outdated, outgunned law enforcement machinery.

The better products in the cybercrime canon are the ones that pay close attention to how gender and class intersect with the matter at hand. In this respect, both Chakravyuh and Chakra fail, while Jamtara and Operation Java succeed.

Chakra and Chakravyuh both briefly acknowledge two facts—one, that the world of technology is still largely male-dominated, especially in India; and two, women are high-risk targets for cybercrime in India, not least because of how often blackmail is at play. However, their actual characters remain stereotypes.

In Chakravyuh, IP, the female hacker character, seems to exist only to transparently lust after her colleague, protagonist Inspector Virkar. And after a solid four episodes of entirely inappropriate workplace behaviour, she is ‘fridged’, a term used when female characters are abruptly killed off for the express purpose of creating a revenge plot for the male protagonist. Chakra features a ‘strong woman’ stereotype not uncommon in mainstream Tamil cinema. Shraddha Srinath’s ACP Gayathri acts tough and beats up the bad guys, up… until the hero, Chandru (Vishal), shows up, at which points she goes back to smiling approvingly from a distance.

Operation Java, in contrast, has a poignant opening scene where a hassled middle-aged woman narrates her story to the cyber cell as calmly as she can. A ‘deep-faked’ pornographic video has been circulating in her neighbourhood, and her neighbours think it’s her in the clip. ‘My children have to go to school here,’ the woman pleads before the police. She is calm but on the verge of breaking down, as the listeners realise—and in that moment, we see how the cyber cell has learnt about the social implications of what they do for a living.

Similarly, Jamtara does a good job of examining how class issues drive the young phishing masterminds in the eponymous Jharkhand town. At numerous occasions, we are shown sweeping shots of Jamtara, where unemployed young men are plentiful. Many of these men take to petty crime. Sunny (Sparsh Shrivastav), the protagonist, just knows how to execute a highly profitable, ultra-modern kind of crime.

The girl he wants to marry, Gudiya, runs an English-language coaching centre, designed to churn out future BPO employees. Sunny keeps quoting amounts of money to Gudiya—one day, he hopes to quote a high enough figure for her to say yes to his marriage proposal. After that happens, she joins the scam, teaching her students how to cheat people over the phone in proper English.

In a beautifully written and performed scene, we are shown two things unfolding, with alternating shots. At Gudiya’s coaching centre, she is going through the basics of the phishing operation with her students, who are learning quickly. Meanwhile, at the local cyber cell office, a young, IIT-educated officer is growing exasperated as Jamtara’s police officers are yawning, eyes glazed over, in the middle of his cyber crime presentation.

The young and the hungry are learning quickly, at the expense of the old, the well-fed and the complacent.

However, this same introspection deserts Jamtara when it comes to caste. In a misguided scene, we see Sunny saying, ‘Ab jiske paas paisa hai, wohi zamindar’ (Whoever has money is landlord now), which is a short-sighted view of how caste functions in India. Even more troubling, an upper-caste character in one scene uses a shocking, casteist slur against a lower-caste character. Had Jamtara’s writer’s room been more diverse, the slur in question (which is illegal in India) would never have been used.

Cybercrime will only receive more and more pop-cultural attention in India. It is imperative, therefore, that its creators realise the endless—and typically Indian—issues that go hand-in-hand with criminal enterprises of any kind, and cybercrime especially so.

Successful, convincing and realistic stories will only happen when the underlying sociology (caste for Jamtara, the economy of ‘degree mills’ for Operation Java) is given the time and attention it deserves.