The City of Perpetual Pursuit

Between Bombay and Mumbai, reel by reel 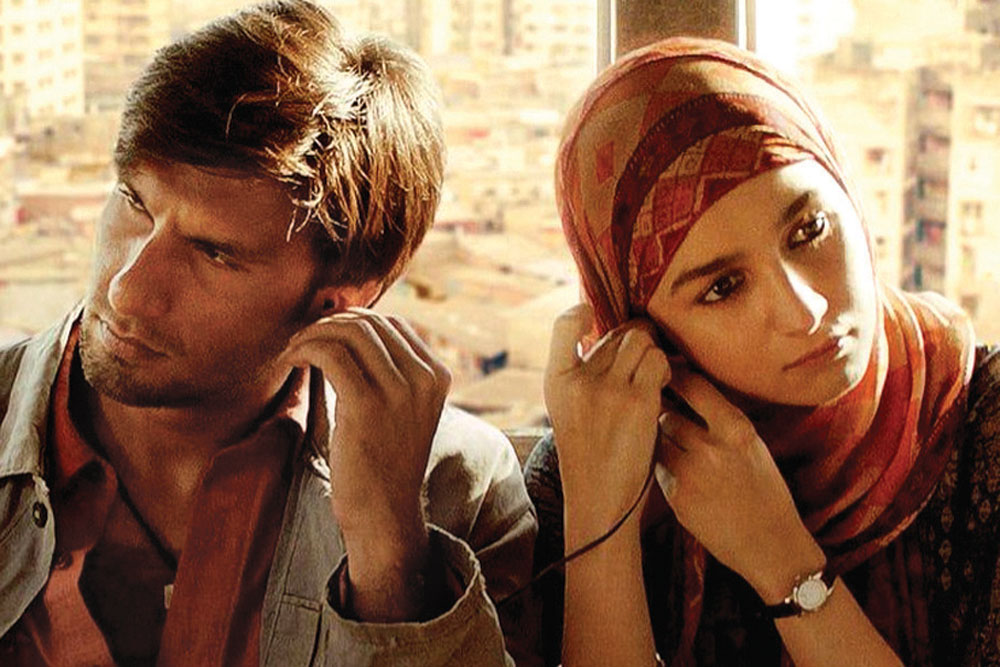 A scene from Gully Boy


A RECENTLY PUBLISHED BOOK in which I was involved, Bombay Before Mumbai, a Festschrift for the Australian historian of India, Jim Masselos, who wrote his PhD on the city at the University of Bombay in the early 1960s, covers the city from very many angles other than the cinematic imagination.

The nature of the Hindi film creates a melodramatic view of the city—as somewhere in which everything has an emotional meaning that can be expressed in words and songs, shot from many angles and always exaggerated. My favourite cinematic imaginings of Bombay/Mumbai are many and varied and so what follows is a very incomplete viewing of this great metropolis.

Films rarely show the sacred spaces of this modern city. However, the Ganpati celebrations feature frequently where stars are seen worshipping the idol or mixing unnoticed in the crowded processions of the idols: Amitabh Bachchan in Agneepath (1990), Shah Rukh Khan in Don (2006), Salman Khan in Wanted (2009), Hrithik in Agneepath (2012). In both Agneepaths and Satya (1998), a gangster is murdered amid the chaos, similar to the events in the celebrations of the festival of San Gennaro in Godfather 2 (1974). These Ganpati processions embody the crowd and excitement of a secular event where the city’s current main deity appears a bigger star than any of the humans.

Films also show Bombay/Mumbai as the home of gangsters and crime, celebrated in the film noir, CID (1956) and in the 1970s movies about smugglers, such as Deewaar (1975) and Don (1978) or Satya (1998). The Tamil (dubbed into Hindi) film Bombay (1995) was set against the backdrop of the 1992/3 riots after the demolition of the Babri Mosque in Ayodhya. The film depicted a south Indian couple, a Hindu husband and a Muslim wife, trying to live a normal family life in the city. 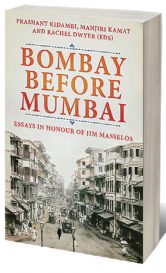 In characters having a mobility to cross space, able to move rapidly across the city, the classic song of Bombay is from CID (1956), ‘Ae dil hai mushkil jeena yahaan/Oh my heart, it’s hard to live here’, a reworking of the tune ‘Oh my darling, Clementine’ into a Hindi film song featuring the comic actor, Johnny Walker, as ‘Master’, a pickpocket. He plays the accordion to link verses whose address demarcates the visual picturisation of the song. He begins with the chorus which he sings to himself/the audience that it’s tough to live here and one must keep one’s wits about one as ‘This is Bombay, my dear’—‘Yeh hai Bombay meri jaan’. Master sings the second verse to a child, telling him there is no heart in the city which is full of all the man-made things which make Bombay modern—using the English words—buildings, trams, motor (cars), mills. The song is shot in front of the railings at Gateway of India, looking like prison bars although the boats in the bay are clearly visible. He finally hugs the boy as if consoling them both for their shared plight of living in this dreadful city. For the next verse, ‘Master’ jumps up next to the driver of a Victoria horse and carriage going along Marine Drive. He sings to him that the city is all about tricks, gambling and deceit, work and making money, not about humanity. The film cuts to people enjoying the promenade of Marine Drive, whether walking or sitting on the sea wall, contradicting the complaint of his song. For the next verse, he gets into the carriage with a female passenger (Kumkum) to whom he sings that the poor are called tramps while they cut each other’s throats and call it (English) business. (The film wasn’t reshot or edited to remove the real-life spectators who realise a film is being shot—as must happen quite frequently in Bombay—and run alongside the carriage seeking a better view.) We see cars and traffic which look modern and stylish—again contradicting his message though the contemporary viewer is likely to find this attractive, remembering the chaotic honking traffic of today’s Bombay. Master relaxes and stretches at leisure in the carriage. He is dressed in Western clothes—trousers and a somewhat shiny shirt, which mark him as a modern Bombayite. The woman is dressed in a sari with flowers in her hair, a style somewhat more traditional than his. She tenses up, getting increasingly annoyed with him. In the next verse, she tells Master to stop complaining and to adjust to the city which rewards hard work. He picks up the chorus again and pretends to pinch her face several times. She then replies with her version of the chorus—that it is easy to live here, and calls him ‘Mister’ and ‘bandhu’ (pal). He then pulls her sari end overhead as a veil, a gesture trying to make her submit to him, or which looks to me like someone covering a talking parrot to stop it from speaking.

This is a song without nostalgia or dreams of utopia. The noir style of the film celebrates the city’s glamour and beauty as something wonderful in itself. Bombay is seen as a challenge and a city which demands that its citizens bow to it to reap its rich rewards. It’s fascinating that these characters who are lower class (although he is a thief) respond to his complaints with silence (the boy and the driver) while the woman puts him in his place—that the problem is his, not Bombay’s. She is shown enjoying Bombay and seeing it as a great place for adventure. She is able to travel alone in a carriage and clearly has no fear of the man, even when he makes somewhat threatening gestures. She is the true Bombayite who tells him to buck up and stop whinging about this great city. (She doesn’t say it, but presumably its wealthy citizens also offer him more opportunities for pickpocketing than he would have anywhere else.)

Many modes of transport feature—Guru Dutt and Johnny Walker take the bus in ‘Dil par hua aisa jaadu/Such magic has happened to my heart’ (Mr and Mrs 55, 1955), but are thrown off as they can’t pay the fare. Local trains, the ordinary person’s way of travelling are seen in more realistic, non-mainstream films, such as The Lunchbox (2013). In Taxi Driver, 1954, the hero (Dev Anand) drives around the city giving us a mobile eye to enjoy the relatively traffic-free city while in Gaman (1978), the taxi driver from northern India, alienated in the city, sings of his home ‘Seene mein jalan/A fire in my chest’.

Romantic couples move around the city to cafés and tea stalls, such as the now defunct Naaz café (Gharaonda, 1977) on Malabar Hill, while the tea stall at which Raj Kapoor and Nargis stop for a cup of tea in the rain (‘Pyaar hua ikraar hua/We’ve fallen in love’; Shree 420, 1955) seems to be as real as any true location. The use of rain as a romantic element is very much part of Hindi cinema where it can evoke eroticism and sex or nostalgia and loss. The inaccessible glamorous Bombay woman was embodied in the song ‘Sheher ki ladki/City girl’ (Rakshak, 1996), where when the man complains, she responds to him only in English.

The tensions that arise in cramped homes without privacy is depicted in films such as Gully Boy (2019). Murad Ahmed (Ranveer Singh) is a college student who lives in Dharavi and has to make a living as a driver when his abusive father falls sick. He becomes a rapper, ‘Gully Boy’, after making a Youtube video, wins a rap contest that sets him on the road to stardom.

The film shows how a young man from Dharavi can fight his way out. His girlfriend Safeena (Alia Bhatt) has a middle-class family which supports her in her career ambition to be doctor, a modern Muslim hijab-wearing woman. Murad is gentle and quiet, offering her a new kind of masculinity and an unconventional future. This is the image of a different Bombay/Mumbai, of its slums, but which offers the same dreams and hopes that the older films did. It is, as the song ‘Ae dil hai mushkil’ said, hard to live in with its lack of humanity and warmth, but if one works hard and walks to its rhythms, it can become easy to live in, its cosmopolitanism, however stressed it may be, still making it the city where dreams can be pursued and may even come true.