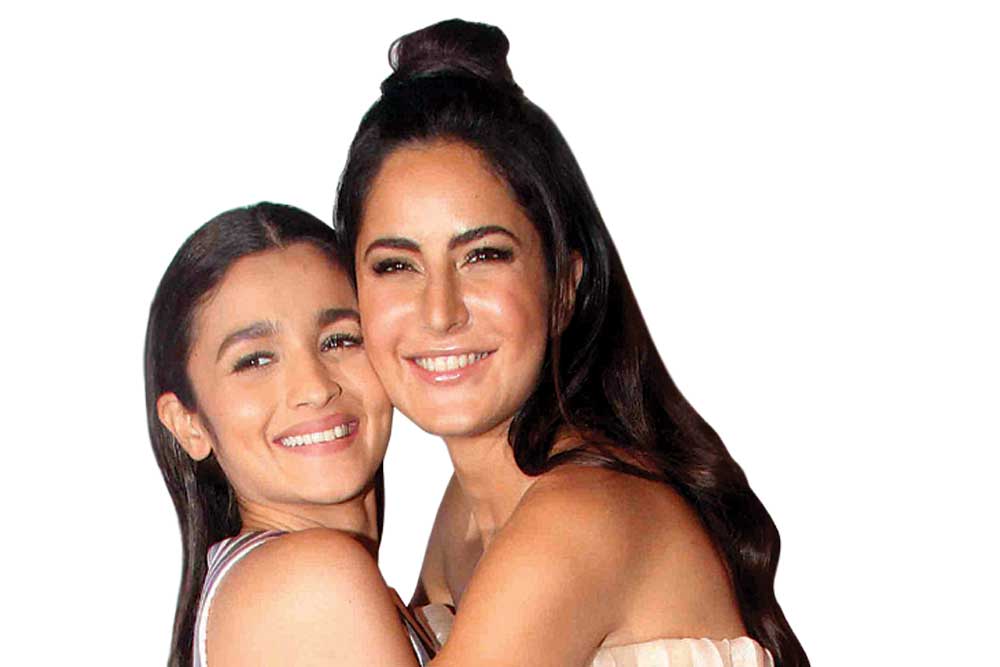 There were more than a few uncomfortable run-ins at Shah Rukh Khan’s Diwali party last weekend, but Alia Bhatt and Katrina Kaif’s awkward embrace is being described as the moment of the evening. Eyewitnesses have revealed that both ladies were fully aware that they were going to bump into each other, and yet the moment they came face to face, you could sense the chill in the air. Good thing for them there were others around, and after the obligatory hug it became a brief ‘group chat’ rather than a one-on-one exchange. They did have a picture taken, though, and expectedly the photograph has gone viral, their forced smiles the talk of the town.

Ranbir Kapoor, who was also present, ran into Sidharth Malhotra in the ‘boys corner’, and while that was also an awkward moment, our source says they were never friends to begin with. Ranbir and Sid greeted each other, then quickly got engaged in conversations with the others around, namely Aditya Roy Kapur, Arjun Kapoor, and Varun Dhawan. There’s a picture of them going around, but you’ll notice RK and Sid conveniently positioned themselves at opposite ends in the group shot.

No drama ensued, much to the relief of their friends and to the disappointment of everyone else who’d trained their eyes on the stars in question, hoping for fireworks.

Shah Rukh Khan has confirmed that it was his friend Aamir Khan who called him up and persuaded him to do Saare Jahan Se Achcha, the film Aamir had been preparing to star in for director Mahesh Mathai. Shah Rukh told me Aamir had to leave the film during development because he became “consumed” by another project, but reached out to SRK to take it on.

The project Aamir couldn’t tear himself away from is on the Mahabharata, which he is possibly developing as a seven-part series. Each part will be two hours in duration, and Aamir will play Krishna while all other principal roles are expected to go to newcomers who’re willing to make the long-term commitment required. Currently being written by a team that Aamir has assembled, the series doesn’t go into production for at least another year or so and will be shot for the better part of the decade, sources say. Aamir is in talks with seven different directors to helm one ‘episode’ each, and the superstar himself will act as showrunner for the series.

When he realised the work that needed to be put into the Mahabharata, Aamir bowed out of Mathai’s film, which is a biopic of Rakesh Sharma, the first Indian to travel to space. Shah Rukh stepped in subsequently and told me he will likely begin filming next March.

Two actresses reportedly turned down a male A-lister who asked them to be in his next multi-starrer film. One is a busy leading lady who’s doing multiple local and international projects and got away by citing the old ‘no dates’ excuse while gently turning him down. The other doesn’t have much on her plate, but politely declined the role saying she didn’t see much meat in it.

Bollywood insiders are saying both actresses vocally supported the recent MeToo wave, and their lack of enthusiasm for this film may have something to do with the fact that there have been murmurs that the leading man in question could himself be outed soon. Not one to be turned down by heroines chosen to star in a film with him, the actor was apparently surprised that both ladies said ‘no’, and especially so given that he’s worked with both of them in earlier films that went on to become big box-office hits.