It tests your credulity, but even so, this high-speed train thriller is worth a watch 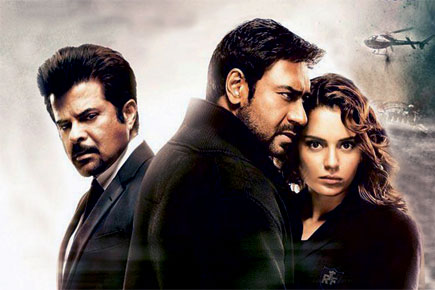 It tests your credulity, but even so, this high-speed train thriller is worth a watch


In Tezz, with so many Indians in key positions at the Metropolitan administration in London, it would be no surprise if there is shortly an English mutiny taking place, described in years to come by British historians as ‘the first war of English Independence’. At least from Hindi movies.

Arjun Khanna (Anil Kapoor) is an anti-terrorist police detective who has carte blanche to do anything he pleases, including putting pedestrians at grave risk with American style car chases and handing over large amounts of money from ‘the Ministry’ as bait for the terrorist Aakash Rana. This disgruntled fellow, played stiffly by Ajay Devgn, is an engineer who traps passengers on a London-Glasgow train with a bomb threat; all in revenge for immigration hassles that prevented him and his colleagues from making England their home. It is the most unconvincing motive for terrorism yet. Who, in his right mind, would kill for living in such an expensive country with such atrocious weather and inhabited by such reticent and unfriendly  natives?

Having said that, when the car, motorcycle, river raft and helicopter chases exit London for the English countryside, it is indeed very beautiful. The rolling meadows and quiet country lanes tell you flatteringly about ‘This other Eden, demi-paradise/ This fortress built by nature for herself’. Rana’s footmen in his war on British Immigration are his former employees,  Aadil Khan (Zayed Khan) and Megha (Sameera Reddy), also denied work and resident permits by those villains at the evil Home Office.

Together, the Empire strikes back, and if it weren’t for loyalists like Detective Khanna and Railway Control Officer Sanjay Raina (Boman Irani), this train thriller, modelled on Hollywood prototypes, would end in tragedy. Tezz is a plagiarised film, true, and tests your credulity, true,  but it’s  watchable. It has speed, boring characters, nice locations and one moving scene with Rana, his wife and his baby on a railway platform.