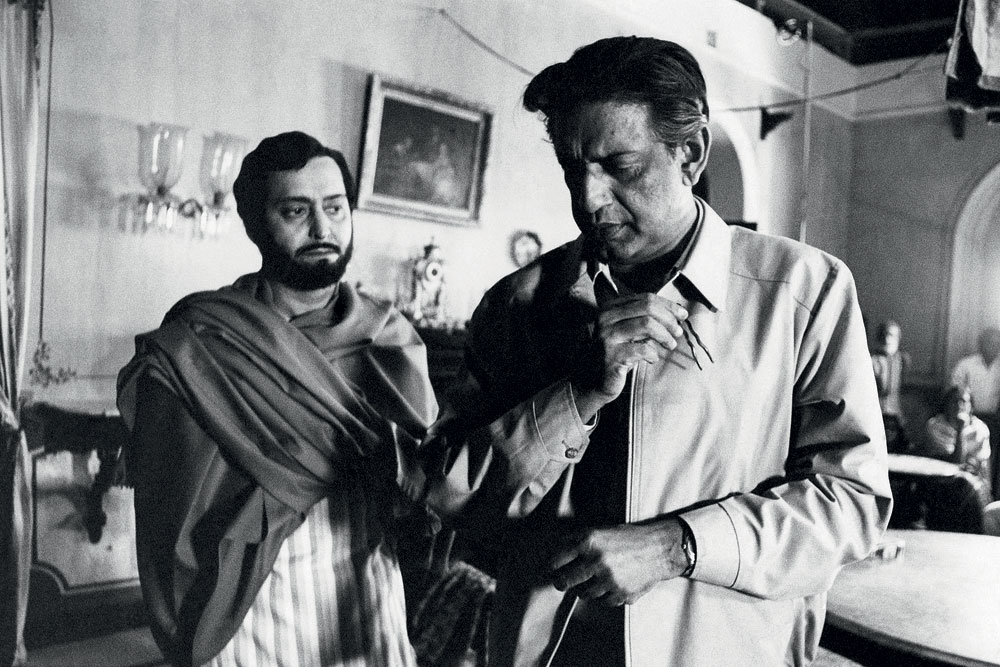 
THERE IS A MOMENT in Aranyer Din Ratri (1970) when Asim, a successful executive out on a jaunt in a forest with his friends, comes upon the books that city girl Aparna is reading: New American Drama, an Agatha Christie, The Survival of God in the Scientific Age and The Metaphysical Poets. Her music LPs are even more eclectic: duets of Vilayat Khan and Bismillah Khan, The Beatles, Joan Baezand Indo Jazz. He cannot fully understand her and says as much. At the end, when they part, she gives him her phone number scribbled on a five-rupee note, by the illumination of his lighter. It’s an inversion of the moment in Apur Sansar, eleven years earlier, when Sharmila Tagore, Apu’s shy young bride, lights a match for his cigarette.

Much had changed with India and the cinema reflecting its realities in that decade. Satyajit Ray and his alter ego Soumitra Chatterjee had much to do with it. Ray and Chatterjee had taught us to negotiate love and death in Apur Sansar (1959), love and abandonment in Charulata (1964), love and cowardice in Kapurush (1965). By the time Aranyer Din Ratri came along, all three themes were in full bloom as was the primary idea: what it is to be a man in contemporary India, specifically a Bengali man in modern Kolkata.

This was the cinema that Nargis Dutt erroneously described as exporting poverty to the world. What it did was export a deep humanism. It was a humanism born of the comfort of Ray and Chatterjee with the home and the world, with the feminine universe and with the transition between the village and the city. In all four movies, Chatterjee is almost in constant motion, either travelling to Palamau in Aranyer Din Ratri or to the small tea planters’ town in Kapurush. He is discovering not merely himself but also the women in his life and the city without.

Much like Rabindranath Tagore’s global humanist, Chatterjee was secure in different cultures, as at ease in reciting Bangla poetry as he was at acting as King Lear on stage, as at ease giving a long speech on Lord Curzon’s perfidious ways in Ghare Baire (1984), as he was casually asking Sharmila Tagore in Aranyer Din Ratri’s memory game, ‘Which Kennedy?’, only to hear, ‘Bobby, of course.’

Bengali masculinity has had many versions. There is the muscular Hinduism advocated by Swami Vivekananda, a fearless cultivation of mind and body. There is also the genteel romanticism of Tagore, embodied in the best intellectual traditions of Santiniketan. Caught between the revolutionary and the poet, the Bengali man may be forgiven for being confused, especially since he had to live with the idea of being effete through much of colonial rule. But in Chatterjee, the Bengali man perhaps found the best resolution of this: a man of refined intelligence, he nevertheless could also on occasion show the common touch, less often than his famous contemporary Uttam Kumar, but no less memorably. One only has to watch him as Narsingh, the taxi driver in Abhijan (1962), to see how well he did this.

In Charulata, his Amal shows us all shades of the ultimate bhadralok, the Bengali gentleman—arm-wrestling with his brother (after inviting him to feel his muscles), singing Ami chini go chini while playing the piano, or discussing the virtues of dissent (as his brother says, to be outspoken is not necessarily to be disloyal).

Chatterjee was certainly one of the last representatives of a cosmopolitan but pre-globalisation generation of Bengalis who were open to the world whilst remaining, like Ray, firmly rooted in their Bengali identity, says scholar Chandak Sengoopta. “He did not even work in Mumbai, let alone Hollywood, but was not the least parochial in his mindset. We are in a different age now, but I shall always respect him as one of the finest exemplars of post-Independence Bengali culture, somebody who was Bengali to the core, but nonetheless a true citizen of the world,” he adds.


In his long and illustrious career, marked by 14 remarkable collaborations with Ray, Chatterjee showed a tremendous hunger to work on his characters, whether it was to accompany Ray to Nadia to work on his dialect for Ashani Sanket in 1973 or to change his handwriting for Charulata in 1964. He was once asked how he would like to be remembered, by his more serious body of work or his popular cinema. Chatterjee said, with his usual shy smile, like a river, that goes on and on. His interviewer in that clip, filmmaker Ramesh Sharma added, “He was an icon—could easily be in the pantheon of some of the great actors in the world. What Toshiro Mifune was to Kurosawa, Soumitra was to Satyajit Ray but because he never made Bollywood films, he was not given the recognition he deserved. He was not just a cinema and theatre actor but also a poet and published and edited the magazine, Ekshan, for years.”

For Sengoopta, what remains most striking is Chatterjee’s incredible diversity as an actor. Unlike many stars, he never got typecast and the influence of Ray was, of course, crucial in this. He says it is hard to believe that the same actor could portray a rural priest with total plausibility in Ashani Sanket (1973) and then, in the subsequent Sonar Kella appear as a consummately urban, erudite private investigator. “Add to these his previous performances as Amal or Apu and his later roles as Udayan in Hirak Rajar Deshe (1980) and one fully appreciates why the American critic Pauline Kael called him Mr Ray’s one-man stock company. This diversity could only have come from a total immersion in his role that famous stars avoid in order to retain their brand image,” he says.

Chatterjee’s brand image was constant: the authentic Bengali bhadralok, which he almost caricatured in The Bengali Night (1988). His appeal in France owed a lot to Ray’s popularity. The Cannes Film Festival director at the time, Gilles Jacob, was a great admirer of Ray, and continues to count him as one of the 15 greatest directors of all time. His advice to Indian filmmakers is what Ray did: tell simple stories about life, love and family that are authentic. Jacob, an old-fashioned storyteller, believes there is more to cinema than mere PR stunts and shallow storytelling. Cinema, he told Open, has to move us, inspire us, maybe not change the world but at least “open our eyes to the wonder of life.” That is the lure of Ray for the world, who saw a culture through the wonderstruck eyes of Apu, as he moved from the village to the city, from childhood to adulthood, from joy to grief to acceptance.

Soumitra Chatterjee was one of the last representatives of a cosmopolitan but pre-globalisation generation of Bengalis who were open to the world while remaining, like Satyajit Ray, firmly rooted in their Bengali identity

His last three films with Ray, Ghare Baire (1984), Ganashatru (1989) and Shakha Proshakha (1990), embody the anxieties of the bhadralok in a rapidly modernising world. Ghare Baire casts him as a fiery swadeshi revolutionary chastising Lord Curzon’s divisive tactics while Ganashatru has him playing the role of a doctor who busts a temple trust that is misusing religion. But it is in Ray’s penultimate movie, Shakha Proshakha, that he plays an ageing, mentally ill son who can see through the heart of darkness of everything and everyone around him, from fractured families to corporate corruption.

It is interesting that Ray did not cast Chatterjee in his Calcutta trilogy, Pratidwandi (1970), Seemabaddha (1971) and Jana Aranya (1976), which capture the discomfort of the urban Bengali man with the economic and social crises of the time. Perhaps he was too urbane to play the young men at the core of these films, too much of a gentleman. Critic Suranjan Ganguly has called the trilogy a filmmaker’s anguished cry at the debasement of a whole culture. “In it he portrays a city without hope,” he says, where corruption is rampant, jobs are rigged, women walk the streets and the unemployed stare vacantly into space.

His middle-class protagonists—all young men—are the victims of a dehumanising rat race, struggling to hold on to their inherited values in the face of betrayal and compromise.

Having grown up in a different era, he says, Ray embarks on “a search for identity” with this generation and the world they inhabit in order to “understand them, or discover his relationship with them.”

When Ray wanted to return to a more gentle engagement with a transformed world, he came back to Chatterjee towards the end of his career. In Shakha Proshakha, Proshanto is first regarded as the crazy one in the family. Chatterjee plays him as a man most at odds with contemporary life, and yet for his ailing father, eventually he becomes the most favoured child.

As he speaks in fragments, “work is worship”, “honesty is the best policy”, listening to Bach and Beethoven, he turns out to be the sanest of them all.

Chatterjee worked in over 200 films, including with other masters such as Mrinal Sen and Tapan Sinha, but it is as Ray’s screen version that he is his most perfect articulation, his most perfect self.