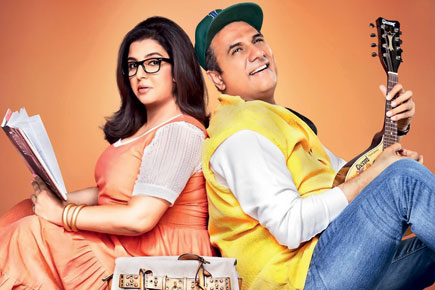 
Fortunately, Parsis have a good sense of humour and can laugh at themselves, even if the jokes are stupid. Shirin Farhad Ki Toh Nikal Padi is a juvenile film about a middle-aged romance that is overdone to the point of caricature. The cast is almost entirely Parsi, the setting includes a Parsi Trust and the Parsi Panchayat, the talk of food is  ‘Sali boti’ and ‘dhansak’, the drinks are Raspberry, and yet the movie doesn’t work.

The script of the film is worthy of a single episode of situation comedy on television, but not of a two-hour movie. A 45-year-old bachelor lives with his mother and grandmother, who keep fixing matches for him with largely ineligible Parsi women who then go on to marry non-Parsis—the story of the community.

Ostensibly, the girls reject Farhad Pastakia (Boman Irani) because he works as a salesman in a bra and panties store. So one day he finds his own match. Unfortunately, the lady, Shirin Fugawala (Farah Khan), happens to be the Honorary Secretary of the Parsi Trust that has ordered the demolition of a water tank  dear to Farhad’s mother (Daisy Irani). She is now enemy number one and the last Parsi in the world that Mummy wants her Sunny Boy to be married to.

This wafer-thin situation and conflict has to be resolved in the film and so a lot of buffoonery keeps it  going—a rowdy community matrimonial meet,  a complaint about a  ‘peeping tom’ by a short-sighted middle-aged woman and a mad bawa firing rounds from an antique pistol. Even Animal Planet on turtles facing extinction could be more sensitive.

Farah Khan believes that winking naughtily every few minutes signifies a woman in love, and Boman Irani has to be more selective about the roles he accepts. A good actor, he may soon end up a caricature of himself.