This is not a film, it’s a recipe for a romcom. And a very middle-class one at that 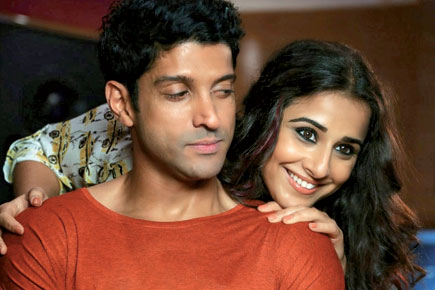 This is not a film, it’s a recipe for a romcom. And a very middle-class one at that

This movie doesn’t have a script, what it does is a recipe from an old cook book. The first step reads: add some excitement to your marriage. So Siddharth and Trisha breathlessly book themselves into a hotel room, like a couple looking for premarital sex. The second step says: add a baby to the frying pan; the third reads: extract husband from baby when baby is well done, and so on, till we run through the whole gamut of the supposed side effects of a marriage.

Siddharth (Farhan Akhtar) is a musician who composes jingles for commercials and calls himself ‘creative’ and Trisha (Vidya Balan) is a homemaker. The couple make ends meet on a single income, but look like they are living beyond their means—in a posh apartment in an upmarket locality.

Being a music composer, Siddharth always has the perfect set of excuses for being late or never there—demanding and fussy clients, recording studios that are booked 24X7, tracks that take forever to be mixed appropriately.

To escape the endless routine of marital strife and babysitting, he consults a ‘marriage counsellor’ (Ram Kapoor)— actually a friend, a fellow-victim of matrimonial discord and a total fraud. He is given this sage advice—‘Make yourself happy so that you can make your wife happy.’

Whatever that means. So Siddharth hires a bachelor pad for his nights out at the recording studio. He gets a room- mate called Manav (Vir Das), the second lead in a TV commercial made in 2009 and the only entertaining character in the entire movie.

But Manav is a man, and this is the cop-out in the movie. The film is cloyingly conformist and will not speak seriously of an extra-marital affair, which is the real ‘side-effect’ of a marriage, either from his side or hers. So the movie ends up in the same category as situation comedy on television, the middle-class consensus firmly in place.