A completely incoherent film from an otherwise talented director 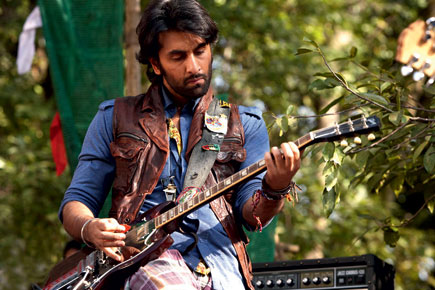 A completely incoherent film from an otherwise talented director


So what happened to Imtiaz Ali between Love Aaj Kal and Rockstar? How does a director of such eloquence and sensitivity become so incoherent so quickly? It cannot be the usual apologies—production problems, star tantrums or budget constraints.

There is no movie idea here to begin with. A young man walking around with a guitar and croaking songs on a college campus might well end up in a Bollywood recording studio. But, surely, being a professional stage musician and performer is a different ball game.

In Rockstar, Jordan (Ranbir Kapoor) is a rocker by immaculate conception. He goes from campus, to street, to dargah, and then, in one leap, mega stardom. Compositions, lyrics and influences be damned. Does a rock star need creative collaborators—a band that he grows up with? Hell, no. Jordan is a one-man show, making music that is so unidimensional and artificial it would never reach a stage of any stature, never mind an international one in Prague.

The film talks about Jim Morrison in terms of his anti-establishment, one-finger gesture, and implies that that was the primary quality of his stardom. The genre and quality of Morrison’s music, The Doors’ talent, the challenge of getting a concert at a prime location, the conquest of the charts, all that is brushed past. Ali is saying, ‘Never mind the damn music, look at my rock star, look at Ranbir Kapoor, how cool he is and how teenyboppers drool over him’.

So Rockstar is about the image of a rocker, and even that is fake. Jordan’s relationship with his muse, a Kashmiri called Heer (Nargis Fakhri), makes no sense whatsoever. One moment she tells him to “bugger off” because he’s such a hick, the next she bonds with him. Apparently, it is this on/off thing that gives Jordan’s music its ‘soul’. Rockstar is a second-rate movie by a good director.

This is so disappointing.