Rhea Chakraborty: The Girl Who Kicked the Hornets’ Nest 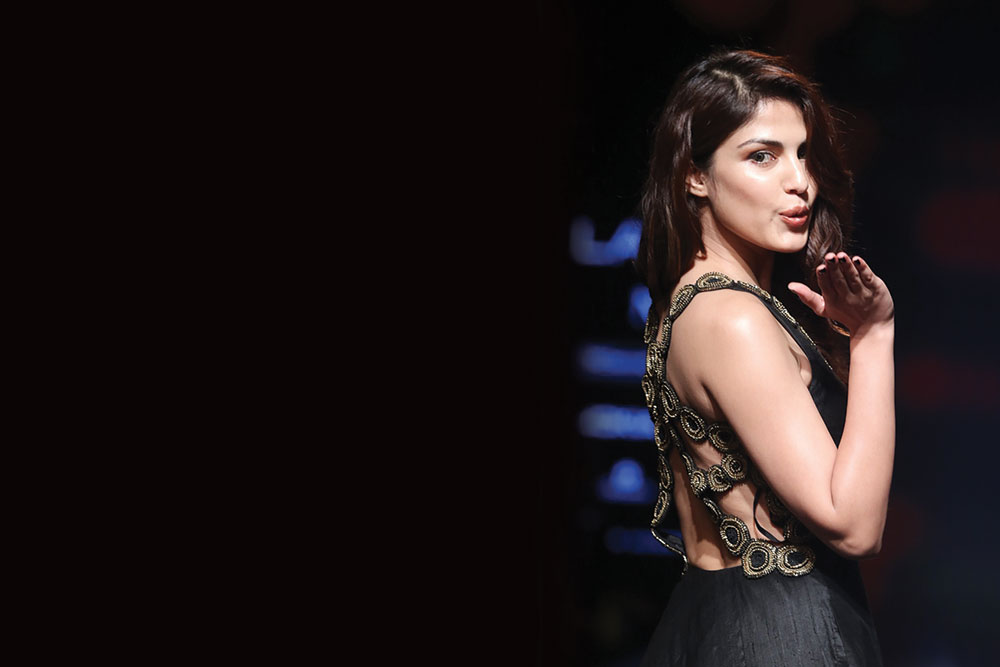 
IT’S 2009. RHEA CHAKRABORTY is one of several gawky teenagers to whom Cyrus Sahukar shoots questions in the TVS Scooty Teen Diva contest. She gets all right, except one: who created the little black dress? Yes, yes, Coco Chanel, but the Army brat from Ambala Cantonment doesn’t know. She doesn’t win the title; it goes to Apeksha Porwal. But being first runner-up, she follows it with a great audition, which lands her a job as an MTV veejay in Mumbai at all of 17.

At the end of the noughties, being a veejay did not have the glamour associated with pioneers such as Ruby Bhatia and Kamal Sidhu, who brought a certain hyphenated ease to post-liberalisation youth as they negotiated the world and the nation at a transformative time. But Rhea Chakraborty did achieve a modicum of fame as MTV’s youngest veejay. She was expected to be bubbly, eternally cheerful and always engaged in what she was doing, which could range from promoting sling bags in a Hyderabad store one day with fellow veejay Bani J to doing skits on MTV with colleagues, a young Ayushmann Khurrana, Anushka Dandekar and José Covaco. Covaco remembers her as being “great to work with” while Sahukar calls her “inquisitive, cheerful, high energy, kind and helpful”. He adds: “I don’t have a single memory of her as being anything other than sweet, warm, with a love for life and knowledge.”

So what happened? What made a hardworking young woman with dreams and ambitions the most vilified woman in the country today? As the girlfriend of the late Sushant Singh Rajput for over a year, she is in the centre of a storm that has brought out the worst aspects of our society as it is—its deep-seated misogyny, its complete lack of faith in the judicial system and its collective sense of victimisation. It is as if Sushant’s death has inflicted a psychic wound on everyone, forcing them to lash out at the easiest target. As a young woman of moderate means and average success, Rhea symbolises the nastiest impulses and the basest instincts in us all. Gold-digger, vishkanya, black magic woman, a woman of no “aukat”. Death threats, rape calls, social media hounding, veritable public flogging by star anchors, there is little that the 28-year-old has not been subjected to since June 14th, the day Sushant died.

There was a time though when Rhea was on the fast track. Shortly after her stint as veejay, she got a film with Y-Films, the youth division of Yash Raj Films, which did well. She played ‘Shakira from Delhi’ in Mere Dad Ki Maruti in 2013, which was a moderate success. Post that, she says in a TEDx talk she delivered in 2019 at BITS Hyderabad on ‘How to Tap the Superhero Inside Us?’, she was sure she’d have a yacht and a penthouse by the end of the year. Or not.

Sonali Cable, her second film, produced by Rohan Sippy, starring Ali Fazal (soon to be seen in Death on the Nile in what has become a flourishing OTT and international career), featured her as a spunky cable operator up against an evil businessman (played by Anupam Kher) looking for market domination. It flopped. It was 2014. Rhea realised, in her own words at TEDx, that she who had thought she had superpowers was not so super. At 25, she started second-guessing herself. “Suddenly, my lips were too thin, my jaw was too long,” she says. By now, she thought she would be a shark in a shark tank but she was just Nemo, a tiny little confused fish. “Hundred books and many TED talks later I realised I had to disintegrate to integrate, unlearn to learn again,” she adds.


She still did some work for Y-Films, which was set up in 2011, on the cusp of the digital revolution, just ahead of the streaming curve. Its feature films, short films and series were interesting, offbeat and aimed at young people. It was headed by her old boss at MTV, Ashish Patil, who was eventually fired in 2018 in a blaze of bad publicity after serious #MeToo allegations by an aspiring writer/actress. Rhea was one of several rising stars in that youth laboratory, alongside Ali Zafar, Saqib Saleem, Saba Azad and Shraddha Kapoor (who was the only one who walked out of Y-Films unhappy with the choices she was given after her movie Luv Ka the End underwhelmed at the box office). Visitors to the Y-Films floor at the Yash Raj Films studio at that time remember it as a buzzing place full of young energy, with writers, actors, directors hanging out together, exchanging ideas in the atrium studded with MF Husain’s wall art, eating free food at the canteen, and often getting to play a game with ‘big screen stars’ at strategically placed table tennis tables. There was an aura of possibility around the division, even though it was clear that the content was not yet commercially viable. There were other metrics of success—likes, thumbs up, number of followers—which became more meaningful as the power of social media grew.

Sushant Singh Rajput was much above Rhea in the Bollywood food chain, yet they could relate to each other as outsiders in an entitled world

THIS IS WHERE RHEA first met Sushant in 2013. He had been signed by the talent management wing of Yash Raj Films after the success of his first film with Abhishek Kapoor, Kai Po Che. By her own account, they became friends but started dating only when they met again at a party thrown by one of the film industry’s super publicists in 2019. By then, they had much in common. Both had been discarded by the powerful studio Yash Raj Films, both had seen failure and both had not achieved the stature for themselves they had imagined. Sushant was much above Rhea in the Bollywood food chain that is determined by box-office revenue and backing of big directors, yet they could relate to each other as outsiders in an entitled world.
From the conspiracy theories now being put out by news anchors, it seems they had another bond, that of drugs, with Rhea acting as a conduit for Sushant to feed his habit, something that has so incensed certain individuals that they have ensured that Rhea in the mind of the public is portrayed as a woman whose sole aim in life was to force-feed drugs to the actor. By her account, she was only trying to help him seek psychiatric help for what was a bipolar disorder. By their account, she was, and is, nothing short of a greedy, needy struggler, with a younger brother who has no recognisable source of income.

Rhea may not have scaled the heights of success she had wanted for herself but she worked steadily enough through the years, mostly for Y-Films. She was Saba Azad’s irritatingly talkative sister in one of six short films directed by Ankur Tewari, Love Shots; she was an Arnab Goswami-loving journalist in Bank Chor where the chors were led by Riteish Deshmukh; and a midriff-baring psychiatrist in Dobaara: See Your Evil, with her old co-star Saqib Saleem. She also landed the part of Arjun Kapoor’s New York girlfriend with a dodgy American accent in Mohit Suri’s Half Girlfriend.

No one had any complaints about either her work ethic or her infallibly sunny nature invariably on display at Y-Films parties and get-togethers. Tewari remembers her as always being available for readings and fittings during their short shoot. “She was always on time and never threw a tantrum on set even though we were on a tight budget and couldn’t even afford vanity vans for the actors,” he says. He feels it is unfortunate that we are at a point where people have lost trust in the system to deliver justice and have decided to descend into a digital mob to demand a solution.

By her account, Rhea was only trying to help Sushant seek psychiatric help. By the media’s account, she was, and is, nothing short of a greedy, needy struggler

Rhea thought perhaps that her role in Jalebi in 2018, as a young woman who walks out of an impetuous marriage to make a career for herself, was her ticket to stardom. But as she says in the TEDx talk, clearly referencing Jalebi, “My dream of a Filmfare award for best female lead was shattered.” This was the period in which she collaborated closely with the film’s producer Mahesh Bhatt, an association that has been presented in the media as creepy rather than avuncular. The film she worked so hard for tanked, yet again, and Rhea says in her TEDx talk that it took her a while to summon the power of belief, of somersaulting over her circumstances, of thinking that a ridiculously bad day could become a ridiculously good day.

It is the same confidence she exudes even today with her back to the wall with so many agencies investigating her, from Mumbai Police, to Bihar Police, to Enforcement Directorate, to CBI to the Narcotic Control Bureau. It is the same assertiveness that she exudes when she announced that she will fight the slander and the infamy. Journalist Jaideep Pandey has interviewed her thrice and says he always found her quite receptive to the questions and elaborate in her answers. “She was always open about her acting career and was at ease discussing some movie choices that didn’t go right,” he says. He says she perhaps made a mistake by taking a break between 2015 and 2017, which she did to prevent being typecast. “By the time she returned, even though she had three quick releases, they didn’t make an impact and the audience had moved on to other stars. The recognition she had earned was lost,” he adds.

There is a 2013 visual of her dancing around Ayushmann Khurrana as he sings ‘O Heeriye’ in a prettily shot music video which ends with the legend: ‘However messy it is, always be in love.’ The reality is that she was perhaps just an innocent girl who loved an innocent boy. And yes, their love may have been messy. But is that enough to put her on a show trial?