Nana Patekar and Shahid Kapur have been turned into spineless supporting actors in this asinine film. 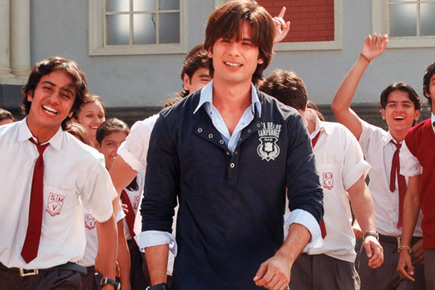 Nana Patekar and Shahid Kapur have been turned into spineless supporting actors in this asinine film.


Good education is an important subject and a noble theme for a movie. The pattern of Shahid Kapur’s film selection has been a curious mix of what he thinks he ought to do as an actor and what he believes brings him dividends. Unfortunately, he has no control over execution, so when a director casts him as an idealistic teacher in a film like Paathshala, and then gives him not a single stand-out dramatic scene to vindicate the star casting, he is left twiddling his thumbs.

Or tuning his guitar, as the case may be. He is an English teacher, but the school asks him to put his musical ability to good use to save them from hiring a full-time music teacher. Clearly, it’s a school in trouble, and the board now wants the kind of big bucks from education that fly-by-night institutions make. Hang academic excellence, they say, turn the place into a brand. Reality television is invited in and kids are put on singing shows, cookery shows, image-building programmes—the circus that is constant media visibility.

The pressure mounts. School lunches become expensive. Students are handpicked in sports, not for competitive skill but for their ability to pay higher fees. The nutritionist (Ayesha Takia) protests when sugar-filled soft drinks are introduced in the canteen, but is told to shut up because the turnover is good.

All the teachers are rudely bypassed by the management, yet strangely none has a clue about the new market-friendly strategy and only question the principal (Nana Patekar) on his acquiescence after the dark deeds are done. For a movie that aspires to be a stinging critique on the commercialisation of education, Paathshala has selected a naïve bunch of educationists to drive home the point.

Most extraordinary of all, Shahid Kapur and Nana Patekar have been turned into spineless supporting actors in Paathshala. With not one stirring speech between them, English Teacher and Principal might as well smile for the cover of a school brochure that advertises the going rate of private education.