These actors, who have given us so much over so many years, are nicely set up in a well edited plot 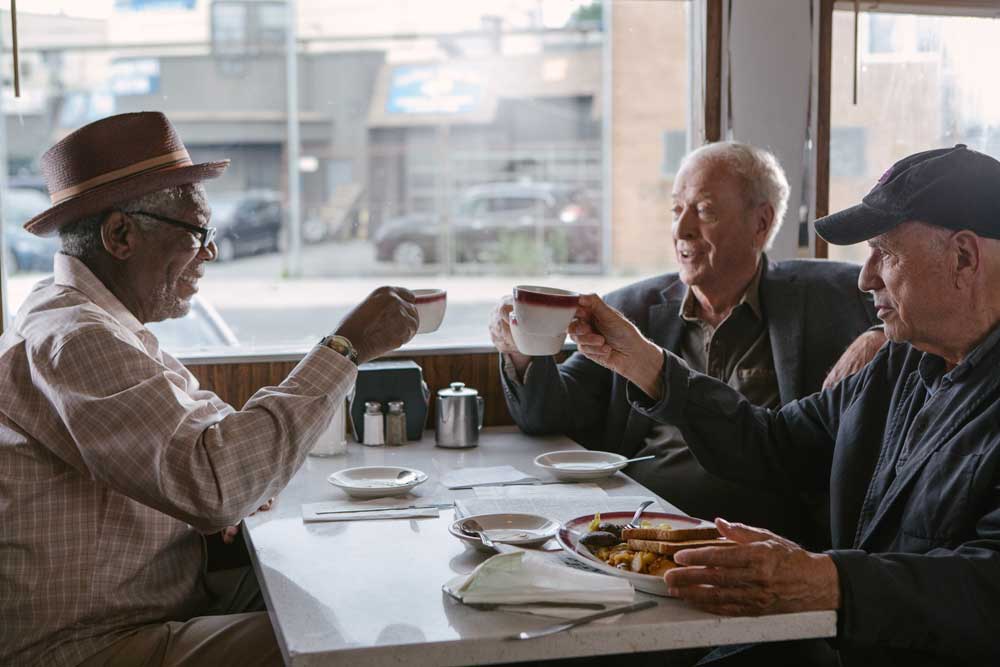 This is a re-make of the 1979 film, but it is good fun, nevertheless. Like the original, it is about three elderly, life long friends who rob a bank. After the 2008 recession and the massive scams that bankers got away with, financial institutions in the United States no longer have the social, cultural and economic standing they once did. This is not to say that conducting a heist now will turn you into a socialist, but bank robbery doesn’t have that old moral sting. Banks have robbed us, so it isn’t such a great crime to rob them.

Willie (Morgan Freeman), Joe (Michael Caine) and Albert (Alan Arkin) have retired from a manufacturing company in the US and live on their pensions. One day they find out that the company they worked for is being ‘ restructured’, with the factory now set up in Vietnam and their pension funds absorbed by a bank. Dead broke, they conclude that even the possibility of prison time, with a roof over their heads and three square meals a day, is preferable to the humiliation they must suffer with in civil society.

Age has not withered this trio of great entertainers, and nor has custom staled their infinite variety. At 79, Morgan Freeman is the youngest. The camaraderie and the chemistry he shares with his elders, is hugely enjoyable, with the humor in the film coming largely from interactions these friends have with people a few generations below them. The waitress at their regular diner suffers their disparaging comments gracefully, but when they keep tipping her with small denomination coins, protests, saying that she is not a laundromat.

Willie is sick, but doesn’t tell his friends, Joe is the life and soul of his granddaughter’s life, a girl who high-fives him and calls him ‘young man’, Albert is not interested in women, until a lady friend outrageously propositions him. These actors who have given us so much over so many years, are nicely set up in a well edited plot. The old boys have come to the conclusion that technology has changed so much with the internet, that before they go ahead with the heist, they now need to get some professional advice from a younger person with criminal experience. So they contact Jesus (John Ortiz), an expert at turning water into wine, so to speak. He transforms them into slick professionals, explaining that bank robbery is more art than technique. The robbers have to learn the craft of mesmerizing the tellers and the customers in the bank, gaining them those extra few minutes before the police is alerted.

True, since it is a re-make, the film’s plot is predictable, but the thing to remember about old age is that it does not affect a good actor’s timing, and cannot erase the magic of his screen presence. So, updated to suit our era, ‘Going in Style’ is an entertaining watch.