The movie is funny in parts, but on the whole, it disappoints 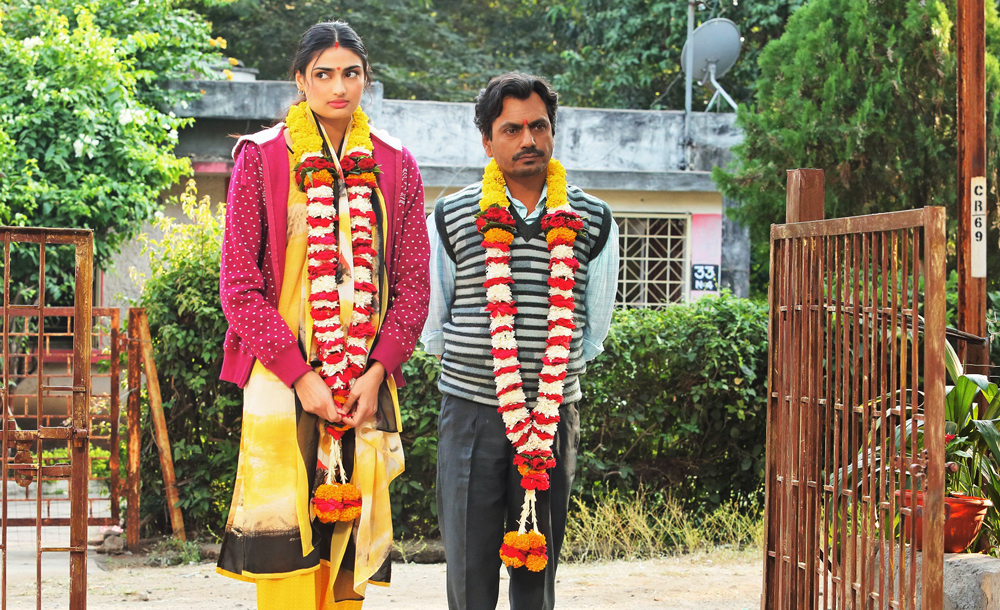 This is a film in ‘Bhopali Bakar’, a catchy dialect spoken largely in the city of Bhopal. It is about two middle class families living next door. The home, left of screen, is looking for a spouse for their son, Pushpinder, now approaching middle age. The property, right of screen, despairs of ever finding a match for their super tall daughter, Anita, Ani for short, but not for tall.

Pushpinder (Nawazuddin Siddiqui) comes home to Bhopal, on a vacation from his job in Dubai, and as he goes out for a smoke he sees Ani (Athiya Shetty) on her side of the fence between their homes. He looks up at her demurely, and politely asks why she is standing on a rock.

Vertical obsession is the long and short of much of the humour in the film, and for a while it is amusing. Nawazuddin uses the deadpan expression of silent movie comedian, Buster Keaton, in some of his gags. The most prominent physical joke is when he tries to hide behind Athiya Shetty, stepping quickly left and right, in accordance with her movements. Both their families stare incredulously at this neighbourly pantomime.

But this actor’s real skill is in displays of terrifying anger, and we have one scene to treasure in this film, when he loses his temper on his younger brother. Done with an intensity that looks dangerous, even as a performance, the blows he delivers on the young man causes the comic element in the film to vanish in a nanosecond, only to reappear when the actor quickly recomposes his features to play the romantic suitor. Whenever we watch him on screen, violence is not far away.

In terms of its content, the film reminds you of the old ‘Doordarshan’ formula of combining comedy with a social message. The missive here is about how the demand for dowry in arranged marriages destroys natural relationships between people, and how it turns a sacred bond like marriage into a purely transactional arrangement, entirely without feeling. Pushpinder’s mother (Vibha Chibber) expects to run her household with takings from her sons’s matrimonial alliances. She is bitter at the unexpected delay in dividends from her oldest, and is consistently venomous towards her family as a result.

Similarly, having met and rejected ten possible grooms presented to her, Ani’s perspective on life is dramatically altered. She now measures men against the foreign denomination in currency they will provide her with, and the prestigious destinations abroad that they can transfer her to, information about which she can then upload on social media.

Pushpinder may be pushing forty, but he has a job in Dubai. Ani’s aunt wisely exhorts her to keep this city in mind, and, during sex, to shut her eyes and think of the Burj Khalifa.

Certainly, ‘Motichoor Chaknachoor’ is funny in parts, but on the whole, it disappoints.