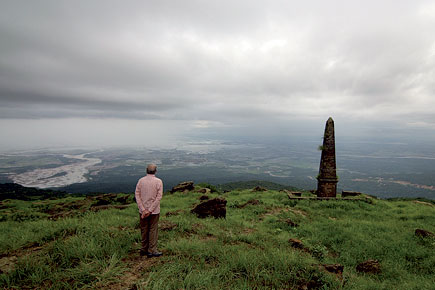 Talk inevitably veered around to raincoats and umbrellas, if only in jest, as the audience settled down for the first-ever press screening of Sturla Gunnarsson’s a year-in-the- making documentary film, Monsoon, at the 39th Toronto International Film Festival (TIFF). Hours later, on 5 September, the skies over the city began to growl ominously and then opened up like an upturned water- tank. Thundershowers triggered downtown traffic snarls, sent festival attendees scurrying for cover and threatened to wash out the red carpet events of the evening. It was almost as if Gunnarsson’s immersive film about the Indian rains had brought a Mumbai-type monsoon downpour to Toronto. But like it almost always does in India, life went on despite the chaos. TIFF took the smooth with the rough as it negotiated its weather-marred second day. Did the Raga Malhar– inspired musical score on the Monsoon soundtrack have something to do with what was happening outside?

If the sideshow orchestrated by the grey skies was any indication, the after-effects of the Indian monsoon— which is now on its last legs on the Subcontinent—could dump a lot of water on North American movie lovers over the next few months. The ‘awe and mystery’ of the weather system that unfolds every year in the Indian Subcontinent, both sustaining and endangering life, has been parlayed into visuals of staggering beauty in a new feature-length documentary by Oscar-nominated Gunnarsson. Filmed with ultra high-definition 4K Red Epic cameras modified for extreme conditions by director of photography Van Royko, Monsoon is scheduled for release in North America in November. The film, replete with stunning time-lapse photography and laden with outstanding music composed by Bombay Dub Orchestra’s Andrew T Mackay, takes the audience on a choppy yet exhilarating journey along the path of the plentiful 2013 monsoon as it hits coastal Kerala and wends its way up to Meghalaya, where ‘the clouds go to die’.

The 63-year-old Iceland-born Canadian filmmaker’s deep and abiding fascination for the Indian monsoon has its roots in extensive peregrinations across the country over the years. Gunnarsson’s wife is a Punjabi Canadian with strong and sustained links with the land that her grandfather migrated from many decades ago. Gunnarsson describes the Indian rains as “the most dramatic show on earth”. He says: “I saw in the monsoon an awful, beautiful, unfathomable phenomenon and wanted to both experience it and meditate on it.” The exercise has clearly paid off, yielding a road-trip documentary that journeys beyond the physical dimensions of the rains and probes the combination of nature, science, wonder and faith lying at the heart of the annual ‘show’. In 1997, Gunnarsson had stayed in India for an extended period for the shoot of Such a Long Journey, his critically acclaimed adaptation of fellow Torontonian Rohinton Mistry’s bestselling novel. “We actually shot the film in the non- monsoon months,” the director recalls. “But when I left Mumbai after my four- week research trip, the rains were just a day away and I could feel the excitement and expectancy in the air.”

In his documentary, Gunnarsson is aided in making sense of the Indian rains by a man he calls a “monsoon philosopher”—Dr Ranjan Kelkar, former director-general of the Indian Meteorological Department (IMD). The seasoned weatherman, on his part, asserts that monsoon is “the soul of India”. “Monsoon is India’s only source of water,” Dr Kelkar says on camera. “For all the water that we need to drink, to raise our crops, there’s only one single source, which is the monsoon. So the monsoon does not only bring water. It brings life to India…” Gunnarsson focuses on this ‘life’ at the heart of a natural phenomenon. The monsoon impacts the economy and sways the mood of the stock market, but more than anything else it shapes India’s human and cultural dimensions like nothing else does. Towards the very end of the film, Dr Kelkar stands before a gigantic rock precipice in Meghalaya, contemplating his position in the universe. “You realise how insignificant you are before the creation of the Creator,” he intones.

Monsoon is Gunnarsson’s “love letter to India”, and it brings him face to face with a large array of individuals—fishermen, school children, bookies, astrologers, park wardens, Mumbai dabbawallahs, meteorologists and even a Bollywood star. Each character adds a distinct layer to this contemplative but entertaining documentary that scours the length and breadth of a vast country in order to understand how the mighty monsoon shapes the lives of its people. The audience watches in horror as rainwater rushes into the home of 12-year- old Kerala schoolgirl Akhila Prasad after a levee bursts amid a heavy downpour. Akhila’s father is understandably devastated, but the little girl exudes optimism and talks of rebuilding the house. It is hope and faith, says Gunnarsson, which drives those that are fated to struggle with the elements in India. “This is the closest a non-believer like me can get to God,” says the writer-director. The film opens with an overarching tone-setting statement: “The monsoon is like an ancient god wreaking chaos and destruction and creating life.”

Over its 106-minute runtime, Monsoon captures with wit, empathy and wonderment “a land of believers” dangling between unwavering faith and helpless resignation in the face of the forces of nature. Gunnarsson has a field day documenting the ways of India’s meteorological bureaucracy. He highlights the work of the Government weathermen in Kerala charged with the task of announcing the ‘official’ arrival of monsoon. Earth scientists studying cloud microphysics at Mahabaleshwar’s Indian Institute of Tropical Meteorology also figure in the film. The spirit of young Akhila has clearly left a lasting imprint on Gunnarsson. “I am in constant touch with her. Their house has been rebuilt and she has returned to school,” he reveals. Akhila will be arriving in Toronto in a couple of months for the North American release of Monsoon. She, Gunnarsson says, has never stepped out of the woods, let alone been aboard a plane.

Monsoon isn’t only about parts of India awash in the rains. It also travels to a parched Maharashtra village that has received no rainfall for four consecutive years. A photojournalist chronicling the plight of the farmers here gives voice to the despair that hangs heavy over the region. Other individuals pop up, none more intriguing than Kolkata’s Bishnu Shastri, a cockily confident bookie who never loses a weather bet. Ironically, he is a migrant from one of the driest parts of India— Rajasthan. Gunnarsson’s film also features a Kaziranga National Park warden, who is hard-pressed to protect the rhinos from poachers when the rains drive the animals to the Karbi-Anglong hills, and the sole official who mans the Cherrapunjee IMD office and dutifully reports on a daily basis back to the headquarters in Delhi. Fishermen in Goa, barred by law from going out to sea in the rainy months, and those in Kerala, who risk their lives with a prayer on their lips because “if they do not fish they do not eat”, are also among those who figure in Monsoon.

Could any discussion on the Indian monsoon be complete without a reference to Bollywood? Gunnarsson picks his favourite rain song, Rimjhim gire saawan, from the late 1970s Basu Chatterjee film, Manzil, featuring Amitabh Bachchan and Moushumi Chatterjee , and gets the latter to reminisce on her take on the ‘wet sari song’. “I picked this particular number because it was a rare Hindi rain song shot off the lot and not in the studio,” says Gunnarsson. “And of course I love the rendition by Lata Mangeshkar.” Needless to say, the making of the film was no walk in the park. Getting across India at the best of times takes some doing, and this was at the height of a very good monsoon. Rain deflectors had to be used to keep the cameras dry and the lenses were always wrapped in electric blankets to prevent condensation and fogging. The most difficult part of the project was anticipating the rains and readying for the shoot. “The Indian monsoon is a chaotic tropical system and making predictions is never easy,” says Gunnarsson.

Will the film be distributed in India? “I would love that to happen,” says the director. But until that materialises, Monsoon could travel to film festivals in the country—Goa, Mumbai and Kerala—so that at least some Indians get to see it. But whether the film will actually make landfall in India is, at this juncture, no less difficult to predict than it usually is to forecast the progress of the monsoon. n