Dibakar Banerjee has stripped his persona off what he shot for this take on Sex, Lies and Videotape. 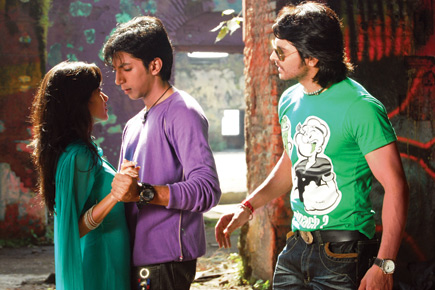 Dibakar Banerjee has stripped his persona off what he shot for this take on Sex, Lies and Videotape.


Way back in 1989, a character in Sex, Lies and Videotape uses a camcorder to tape women talking about their sex lives. Steven Soderbergh’s film uses amateur video photography to examine sexuality in and outside marriage. With such striking similarity in the choice of his movie title, one can only infer that Love, Sex Aur Dhokha is Dibakar Banerjee’s Indian take on how the ubiquitous digital camera has invaded and occupied our lives.

There is one significant difference. Soderbergh’s film has a moral compass and even as it includes a voyeuristic perspective, it has other points of view that allow the director to pull back to a wider picture of contemporary society. Banerjee’s film has no such frame, and from start to finish, in all three stories in his movie, we have a student film, CCTV footage, jumpy hand-held shots from hidden cameras, grainy resolutions—the kind of stuff you see on YouTube—but not once do we see Banerjee’s point of view. It is as if he has deleted his persona from what he has shot.

The situations and subjects are interesting, but only the first episode has the power to shock, a story in which a student film director and his ‘heroine’ are clubbed to death when they dare to defy her rich father and get married.

That shocker apart, the other two stories are everything we know about from our daily calorie intake on the ‘idiot box’—the sale of dramatic or sleazy CCTV footage to TV channels, the Tehelka-like stings, the casting couch adventures of a dancer betrayed by a pop star. It is all quite disturbing, certainly, but nothing out of the ordinary. What we desperately need in the film is a stance, an attitude, a position, a cinematic and artistic evaluation of the footage shot.

We never get it. All we are left with are slender narrative threads connecting the three stories. So how do we distinguish between the staged tapes and the organic whole of the movie?