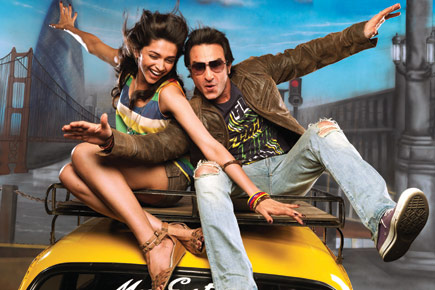 
Imtiaz Ali is a gifted filmmaker with a nuanced understanding of architecture. In Love Aaj Kal, he uses four cities as metaphors for his notion of romantic love—Delhi, Kolkata, London and San Francisco. He also uses two time zones for the two romances in his film and cuts effortlessly between the past and the present, weaving both stories around the idea that romantic style may vary in different ages, cities and cultures, but the essence of love never changes.

Jai (Saif Ali Khan) and Meera (Deepika Padukone) break up in London because it’s the practical thing to do. She works on conservation and restoration of heritage architecture and has an exciting job in Delhi. Hearts are not broken, only bruised, but London cafe owner and proud Sardar, Veer Singh (Rishi Kapoor), warns Jai that they shall shortly be broken. He rewinds to his own love story, circa 1965, Delhi and Kolkata, with Saif playing the young Sardar and an enigmatic actress called Giselle Monteiro playing his true love, Harleen Kaur.

It’s a good old-fashioned love story, told in the idiom of our electronic times. Meera gets married to her boss in Delhi, but Jai is a click away, and the speed of broadband, the beep of a message, an e-ticket to Delhi, the ease of our communications, dooms her marriage. Jai gets a great job in San Francisco but the Golden Gate Bridge soon loses its magical allure. What is interesting about Ali’s direction is the basic respect he gives human experience and cultural conflict. The 1965 love story is, in many ways, a documentation of Sikh custom and entrepreneurial spirit, just as the 2009 story is about our disconnected lives.

Love Aaj Kal is not a work of art, but it is a great movie experience. The film has an old story, acting that is enthusiastic without being outstanding, but a cinematic style so sensuous and aesthetic that it seduces you entirely.