Indian women are wowing on the red carpet and the after-parties. Now could someone please cast them in movies that compete for the Palme d’Or? 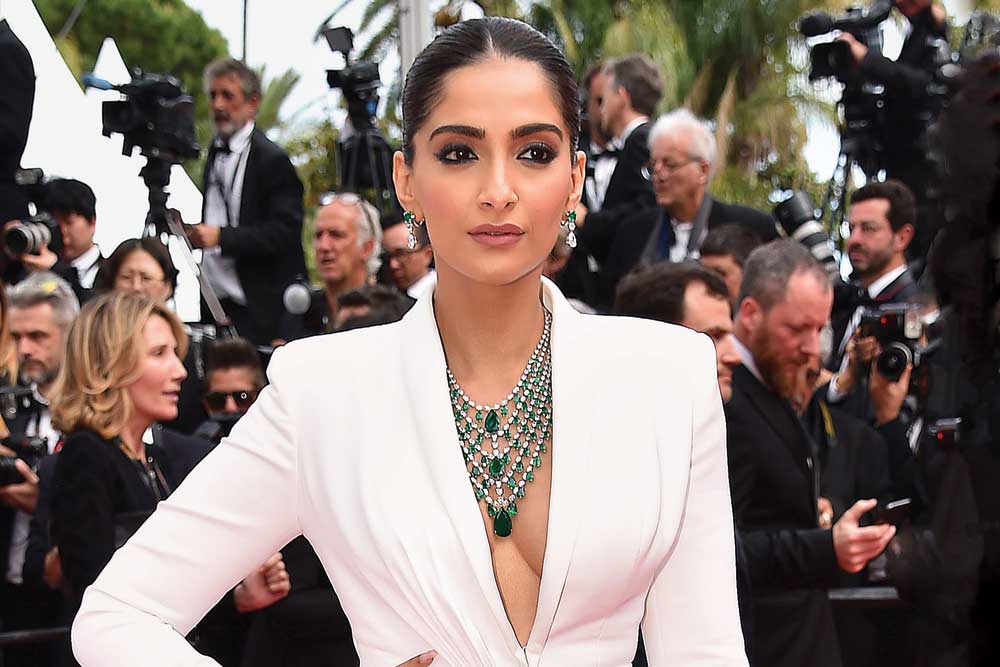 IN 1987, WHEN the late Princess Diana attended British Film Day at the Cannes Film Festival, dressed in an iconic pale blue off-shoulder Catherine Walker gown, it coincided with the introduction of the red carpet to the Riviera hotspot. Since then, fashion has become almost as important as art and commerce at the world’s premier film festival. Photographs from the red carpet can make or break careers, brands and movies. For the festival’s sponsors, such as Chopard and L’Oreal, the global publicity is worth its weight in investment in its ambassadors all year-round. As Caroline Scheufele, the artistic director of the privately-held luxury jewellery house Chopard told me in 2017, when they celebrated 30 years of their partnership with Cannes, “The red carpet is the ambassador for our jewellery which is 50 per cent of our business. When friends of Chopard, like actors Julianne Moore, Charlize Theron, Diane Kruger and Marion Cotillard, wear our jewellery, the global images for us are fantastic.” Pictures of the jewellery, showcased on the terrace of the iconic Hotel Martinez and secured by burly bodyguards, translate into sales.

Ditto with L’Oreal, the French beauty brand, which became the official sponsor and beauty partner of the Cannes Film Festival in 1998, that has since then sent many of Bollywood’s finest to the red carpet to play and slay. “It takes a year to plan, between makeup artists, designers, hairstylists and our dream team of spokespeople. The festival is our marquee event to debut new products and celebrate existing ones,” L’Oreal CEO Jean-Paul Agon had told The Hollywood Reporter in 2015.

Aishwarya Rai Bachchan, perhaps India’s best known actor at Cannes, has been L’Oreal’s ambassador now for an incredible 16 years, doggedly holding on to her designer gowns, and now her daughter, even as younger envoys such as Deepika Padukone and Sonam Kapoor Ahuja give her a run for the runway.

Of late, the-less-than-a-mile long carpet, leading up to the stairs of the Palais des Festival where the movies selected for the In Competition section are shown, has become the place for Indian actresses to shine—their dazzle rising in proportion to the domestic market for cosmetics and luxury goods. The brands, whether it is Grey Goose vodka for Kangana Ranaut or L’Oreal for Deepika Padukone, ensure access to the premieres, in return for mileage for their product. The premium vodka market in India is growing at 25 per cent annually—the fastest-growing spirits segment—and having stars Ranaut, Diana Penty and Huma Qureshi attend their party is a great way of surrogate advertising.

India is a major market for L’Oreal as well, which wants a bigger share of one of the biggest global markets for cosmetics for its many brands—from Garnier to Maybelline to L’Oreal Professionnel. Chopard’s philosophy is the same—getting Priyanka Chopra to wear their diamonds this year must have been a major coup, given her high profile as a leading TV and film actress as well as one-half of a global power couple along with singer Nick Jonas (though why Variety put a question mark after that statement is a question in itself).

THERE WAS MUCH hullabaloo over TV actress Hina Khan’s appearances at the red carpet, but the truth is that acquiring a ticket to a red carpet premiere is not very difficult given the quotas—for sponsors, producers, other associates. If you’re lucky, you make a few calls to the right places, or if you’re really eager you can hang around sharply dressed on the Croisette and scalp a last-minute invite. If you’re a professional attention-seeker like Mallika Sherawat, then Cannes and you are made for each other. Ever since she wore a gravity defying lehenga-choli to the premiere of Jackie Chan’s The Myth in 2005, Sherawat has become a regular at Cannes, popping up at premieres and sometimes locking herself up in a cage on the Croisette to protest against human trafficking. It helps that she now spends most of her time in Paris with her French real estate businessman boyfriend Cyrille Auxenfans. Think of her as Priyanka Chopra without the talent, blazing a trail for Indians in Hollywood with her attempts at movies such as Hisss (2010) where she played a snake-woman and Politics of Love (2011) where she essayed the role of a politician, reportedly based on Democratic presidential contender Kamala Harris.

The movies didn’t work but Sherawat, who learnt the art of controversy at the feet of Mahesh Bhatt, made the status of women in India her pet peeve, giving interviews on honour killings and female infanticide, adding to it the authenticity of being a woman from Haryana—though far from disempowered.

If there is one true blue star from India whose photographs routinely find a place in the Cannes hall of fame, it is Aishwarya Rai Bachchan, who is as beloved for her beauty as Satyajit Ray was for his cinema (with Cannes even ensuring his hotel room had a custom- made bed to fit his 6-ft-4-inch frame). Rai’s star first shone brightly under the Cote d’Azur glare—most premieres are held in the late afternoon—when Devdas was screened in the Out of Competition section in 2002. The film got a standing ovation and the following year Aishwarya was on the feature film jury along with Meg Ryan and Steven Soderbergh. That was also the year she became part of the L’Oreal Dream Team. Since 2003 Aishwarya’s relationship with haute couture has improved, as she has worn every colour in the Indian palette in every imaginable Indian silhouette, ranging from a georgette kurti to a light green crepe seedha pallu sari.

Nandita Das, who followed her on the jury two years later, is another favourite but although she is known to borrow L’Oreal makeup experts, she steadfastly refuses to step beyond Indian clothes. The actor-director’s Manto was screened in the Un Certain Regard section last year and she remains a great favourite of the honorary president of the festival, Gilles Jacob.

There’s no one who can bridge the gaps between movies and masala quite like Ismail Merchant though. Merchant met his long-time collaborator James Ivory in Cannes in 1951. As their friend and actor Madhur Jaffrey told me in an interview in 2017, “Ismail would invite you to a party at Cannes and then make you shop and cook for him. But we wouldn’t mind. He would persuade you to do a film then, and pay you very little. But we would do it because we loved him.” ‘We’ being his usual gang of actors which included Shashi Kapoor.

Under Sushma Swaraj as Minister of Information and Broadcasting, the Government did a considerable amount to raise the film industry’s profile, even hosting Bollywood nights in association with the Confederation of Indian Industry. In 2003, Shekhar Kapur even managed to bring Harvey Weinstein, who was still all powerful in Hollywood, to one such sarkari party, but by the time the next festival came around the BJP-led Government had been defeated in the General Election of 2004.

The Indian presence on the film market continues but despite occasional steroid shots such as Ranaut’s presence this year—along with Information and Broadcasting Secretary Amit Khare and censor board Chairman Prasoon Joshi— clad in a Kanjeevaram, corset and gloves, there is little enthusiasm for Indian cinema. Kapur, who was member of the feature film jury in 2010, says the problem is India has stopped delivering world-class cinema, “which is why we couldn’t build on the hype around Devdas”. Cannes still matters, he feels, especially in an age when Disney is taking over all entertainment, because it provides a platform for independent cinema worldwide.

Indian storytellers are doing much more innovative work on streaming platforms which Cannes ruthlessly tries to excise with its philosophy of theatrical release before digital premieres. Much of the deal-making has shifted focus to Los Angeles and Mumbai, or wherever the talent is—it could be New York for Ritesh Batra, Delhi for Mira Nair or Toronto for Deepa Mehta. “Yet, there’s nothing like a breakthrough at Cannes,” says Kapur.

Yet, he believes the brands which once drew their sustenance from Cannes have taken over the festival. “The red carpet looks like an extension of the Met Gala without Lady Gaga,” he adds.

The expenditure for a stay at the Martinez, Majestic or Carlton, with the wardrobe to match, is not everyone’s cup of espresso. And though there are enough parties to gatecrash, scruffy cafes to eat in and restaurants to swill your wine at, Cannes is eventually in the words of Variety (used approvingly for Padukone’s fashion sense), the place where you go big or you go home. Jessica Hines, who was at Cannes representing her newly-formed movie company, Handsome Films, says Padukone was the standout star of the festival, with her carefully curated looks which went all out for high glamour and brought the Bollywood maxim that ‘more is more’ to the red carpet. These days, she says, a star’s looks need to be taken as a whole. She has anointed Padukone as the winner because her dresses—all radically different—had a unifying theme, a bold elegance and a clarity of concept pulling them together into a satisfying Instagram experience.

Indian women are wowing on the red carpet and the after-parties. Now could someone please cast them in great movies that compete for the Palme d’Or? The last time an Indian film was in competition was 1994. The director was Shaji N Karun and the film was Swaham.