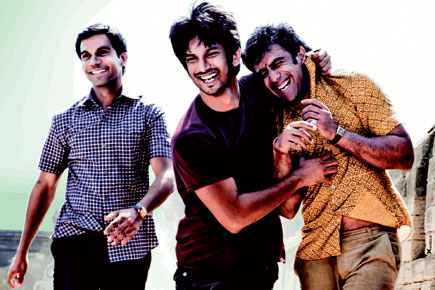 Director Abhishek Kapoor, adapting Chetan Bhagat’s The 3 Mistakes of My Life, has made a very long-winded film. The story of soul buddies in Ahmedabad in the early 2000s—young entrepreneurs intoxicated by the economic liberalisation unleashed in the previous decade who have their exhilaration expunged by natural and political calamity (the earthquake of 2001 and riots of 2002)—is not absorbing in the movie.

All three friends—Govind, Omi and Ishaan—are ‘flat’ characters, people who are given a particular personality and behaviour pattern and don’t evolve or change too much during the course of the story. This may appeal to viewers who want a good narrative and who do not want to be challenged by complex and thinking individuals. Even so, the movie spends too much time setting up its location, giving you the ambience and describing how the three bond.

Though Kai Po Che is presented as a ‘buddy’ movie, these guys are not particularly interesting. In Gujarat, of course, bonding means talking about money. Right from the word ‘go’, we see them trying to raise funds for a sports shop—getting a loan, badgering their relatives, checking out real estate for space in a mall—so much so that, oddly enough, we do not really know, at the end of it, why they are such good friends.

We never see them connect as people. As for money, only one of them really understands it—Govind (Raj Kumar Yadav), the best drawn character and the only one who appears intelligent. Ishaan (Sushant Singh Rajput), is a cricket-mad fellow with so little self control that you could call him a duffer, and Omi (Amit Sadh) is colourless.

Shooting a film in a realistic format, as Kai Po Che is, does not make it true to life. The only nice thing about the movie is the brilliant title that rolls so beautifully off your tongue—Kai Po Che.