‘I am never good enough for myself’ 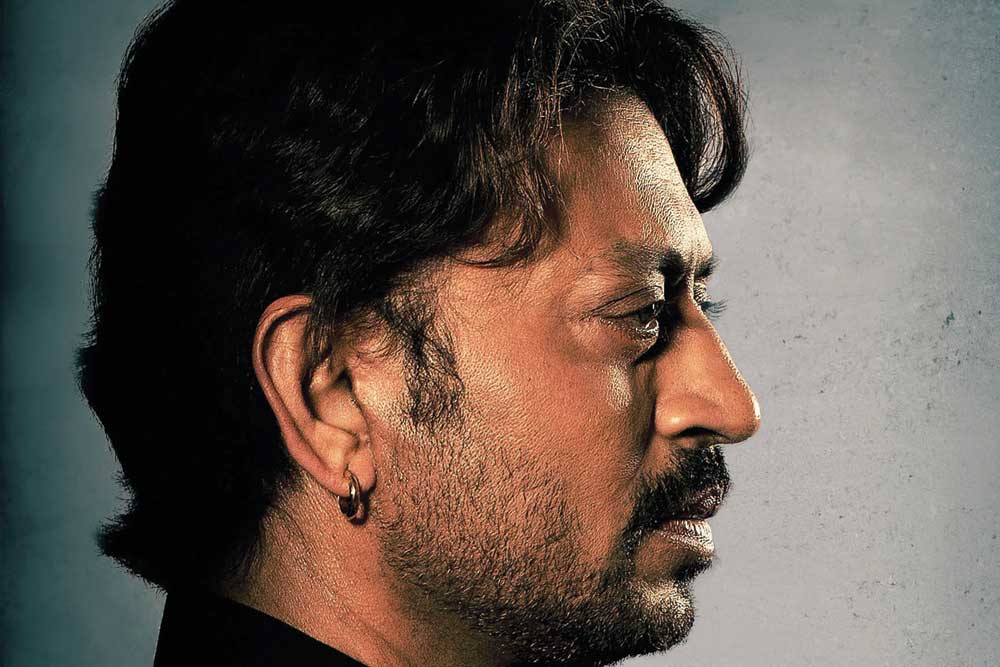 ALMOST 40 YEARS ago, at the age of seven, Irrfan Khan’s father packed him off to his maternal grandmother’s house in Tonk, Rajasthan. He was being punished for his ‘patang baazi’—for flying kites too often. His nani, the only woman who was a hakim in that village, readily came to his rescue. “Her hands often smelt like the herbs that she’d use to treat patients. I’d spend months with her learning how she healed people,” Irrfan says, recounting the influence of strong women in his life. They would always rescue him, he says. “My father was hardly available. I was brought up by my mother, my sister and my khaala (aunt). My granny was an epitome of positivity. She looked at me with so much adoration and touched me without words. It was enough for me. I was a sucker for their love.”

Nothing much has changed today. He doesn’t mince his words about how much he loves the women in his life— be it his mother, his sisters, his wife, or his female co-stars. They are strong, independent, and he believes they are the driving force in his otherwise crazy life, just like the protagonist of his latest film Qarib Qarib Singlle.

“Toh…kaisi lagi tumhe film?” he asks in his characteristic style, without making direct eye contact. He’s rushing to the airport for a flight to Thailand and he doesn’t mind that I’ve tagged along in the car. His hands flutter, his feet tremble, but his face is calm as a monk. He pushes his seat back, adjusts his sunglasses and waits for me to respond. I’m honest with him.

Qarib Qarib Singlle isn’t a story that hasn’t been told before. Here was a feel good, slice-of-life tale about a middle-aged single woman in India trying to find meaning beyond her work and social life. From the first frame, we know this is a story told solely from the female gaze. It has been directed by a woman too (Tanuja Chandra). But Irrfan brings colour to this otherwise conventional rom-com.

He lifts the story with his genius improvisations and presence of mind. Without overstepping the boundaries, Irrfan gives us Yogi, a character who, by the end of the film, we all wish we had in our lives. “I love this lightness of being in him,” Irrfan says, and I agree. He is the perfect friend, ready to bear the brunt, when the lady with him is anxious and in doubt. He is proud of his past girlfriends, but smiles endearingly when his ex’s son calls him ‘mamaji’. His life is not hunky- dory, but he is able to laugh at himself.

You could say that Irrfan’s Yogi is almost the male version of Kareena’s Geet in Jab We Met (2007), filling the gaps in the script. “Honestly, I approached this improbable guy Yogi with complete distrust . He’s loud, cracks bad jokes and perpetually has one foot in his mouth. I had to talk like Basanti from Sholay. And anyone who knows me well enough knows that I don’t speak much and my reactions don’t come that easily. But eventually I fell in love with his soul,” he says.

Irrfan hasn’t been the protagonist in several of his recent films, be it Piku (2015), The Song of the Scorpions (2017), or now in Qarib Qarib Singlle. All of them have been driven by a woman’s conflict or personality. Irrfan complemented the female characters with grace. He not only surprises you in scenes, but brings the character alive in real time, bit by bit, while you sit watching. He’s un-rehearsed, organic and perhaps the one actor who understands timing within a scene more than any other today in India. “There is no gender war in my head on choosing stories. Gone are the days when an actor needed heroism to prove his might. It would be foolish and limiting for me to only look for stories [that] revolve around my character. We keep talking about equality every day on social media, yet we are [still too] conservative to give equal roles to women in both our reel and real lives. For me the beauty of gender is they complement each other. I never thought of myself as less, or them as any less,” he says.

Gone are the days when an actor needed heroism to prove his might. It would be foolish and limiting for me to only look for stories that revolve around my character

Thirty years ago, when he began his journey as an actor in India, his priorities were different, and so were the stories being told. The 80s, when he started, was perhaps the dullest decade of storytelling in Hindi cinema. “Which is why I stuck to television,” Irrfan jokes, as he recalls working on almost four different TV shows at a time.

“Some of the shows like Banegi Apni Baat (1994) and Private Detective (1997) were fun to do, but at that point acting was merely a matter of survival. You were not expected to and neither could you afford to have an opinion or perspective on anything. I grew up in Rajasthan and I grew up around men who were driven by heavy norms of patriarchy. As a kid growing up, that’s what you see and learn and imbibe as morals within your characters. It took me a while to break that, but I did,” he says.

HIS DAYS AT the National School of Drama broke many of his gender perceptions. He believes it contributed heavily to his growth as a performer. “My partner and I were great friends during our NSD days and that was something I couldn’t have even dreamt of as a kid. We’d have workshops and numerous sessions on how things like age, gender, body were all mere hindrances when it came to performance. One had to go beyond our bodies and everyday emotions to understand what one could truly achieve as an actor,” he says.

Even after his training as an actor, he struggled to prove himself. The 90s were all about love stories or revenge dramas and he took any half decent part that came his way. “When I started, the struggle was always about keeping the interest alive. I was fed up with television but I had to keep it going. I was fed up with playing the cop but I had to keep it going. It was a constant battle in my own head that I was fighting,” he says.

It took Irrfan almost 15 years to start playing the parts he truly deserved, but once he broke ground with films like Maqbool (2003) and The Namesake (2006) there was no looking back. In many of these films, his performance surpassed the barriers of age, physicality even gender. “During that one scene in Maqbool when my lover dies in my arms, I almost felt like I could be her. I felt her pain, her agony, her helplessness. It’s a kind of realisation that comes to you after years of trying to achieve a certain mark as a performer, but you can never apply it consciously. It’s very subconscious and it can carry you a long way,” he adds.

Today, Irrfan’s filmography is the most eclectic amongst actors of his generation. Be it in India or internationally, he feels his methods have never changed. After working with Irrfan on a long schedule on their film Inferno (2016), Tom Hanks said he was a bit intimidated by how precise Irrfan was with his preparation for the part. “I think he is too generous and kind to have said that. I was in awe of him, but I am selfish as an actor [and so I] concentrate on my work and do not get floored. I am not self-confident. In fact, I had an inferiority complex when I was a kid. I am never good enough for myself. But I think my curiosity and my questions hold me on the ground,” he adds.

In his latest film The Song of Scorpions that’s travelled to many international film festivals, he plays an obsessive lover who takes extreme measures to attain what he wants. He’s a camel trader in Rajasthan who falls for a woman who heals people with her songs. It’s among the darkest roles he has played and one that will probably make you wonder why he chose to play the part. But he isn’t worried about acceptance, or perceptions or holding onto a moral high ground. “We all have faults and nobody is perfect. Have you met anyone who is completely black or white in real life? What I tried to capture in The Song of Scorpions is extreme passion and emotion.”

After performing in over 70 feature films, and capturing audiences the world over, Irrfan feels his challenges today are different. In the last two years, Irrfan has done a Japanese mini series, Tokyo Trial, two international films, six Indian movies and is all set to start work on a Netflix Original series and another feature with Vishal Bhardwaj. He’s already filming his next Hollywood project Puzzle (2018). “I am constantly looking for newer, compelling stories, so I don’t repeat myself. In India there is a huge danger of being trapped in an image. Writers and directors see you more as a persona than an actor, which is detrimental to my graph. So I only go for stories that are in sync with my sensibilities and constantly ingest some adventure in my journey. That is the essence of how I keep myself going,” he says.

The only thing he misses from his life as a nobody is the privacy and lack of attention. “I don’t miss my earlier life because what I have got is more then I have lost. I am not so social, never was. I liked travelling, which I still do, I loved jungles, where I still manage to go. I camp, I fish, I read. The only thing is I am little weary of too much attention and I miss the silences.” Before he hops onto his flight, he a quotes Rumi: “Maybe you are searching among the branches, for what only appears in the roots.” “Think about it,” he says, before vanishing for his next journey.