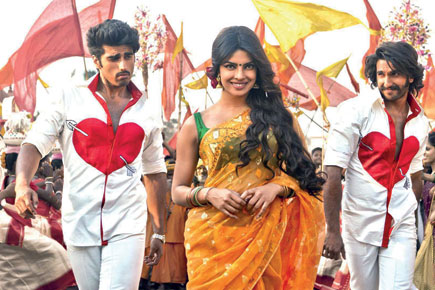 Gunday is a male-bonding, cross- border, train-robber film. It was the US and Bolivia in Butch Cassidy and the Sundance Kid and it is Bangladesh and West Bengal in this movie. But since this is a Hindi film, there is a childhood back-story here. Two kids become gun runners in East Pakistan at a time when the Mukti Bahini and the occupying Pakistani army were in civil conflict, and then, during the liberation of Bangladesh in 1971, cross over as refugees to Calcutta.

Struggling as migrants, they take to stealing coal from goods trains, just like another refugee on the other side of the country in Bhaag Milkha Bhaag. But that film was biography, and this is not very credible fiction. That’s one of the problems with the film. The transition of the duo from daring but otherwise pretty ordinary robbers to the mafia rulers of the city of Calcutta in the 1980s is not explained at all. A film clip of Anil Kapoor and Sridevi in Mr India, shots of the Howrah Bridge and the docks, the nightlife on Park Street—all this is presented as evidence of how Bikram (Ranveer Singh) and Bala (Arjun Kapoor) ascended the crime hierarchy of Calcutta.

The truth, of course, is that at this historical juncture, it wasn’t the mafia but the CPM that ruled Calcutta. Anyway, two Bengali police officers, one ACP Satyajit Sarkar (Irfan Khan) and the police chief (Victor Banerjee), turn on the heat. They get the duo trapped in a chakravyuha, using the sexy Cabaret dancer Nandita Sengupta (Priyanka Chopra) as bait to divide and ensnare them.

Priyanka really turns it on, wearing a sari like a halter top dress, sashaying down to buy hilsa. In truth, she steals the movie from the ‘gundays’. We saw Rekha in a cameo in Parineeta (2005), doing a sizzler at the Calcutta restaurant Moulin Rouge. Priyanka comes close here. As for the ‘gundays’, they have their gun days. A movie that is rather too loud, but still watchable.