Going beyond a ‘Halal Cut’ 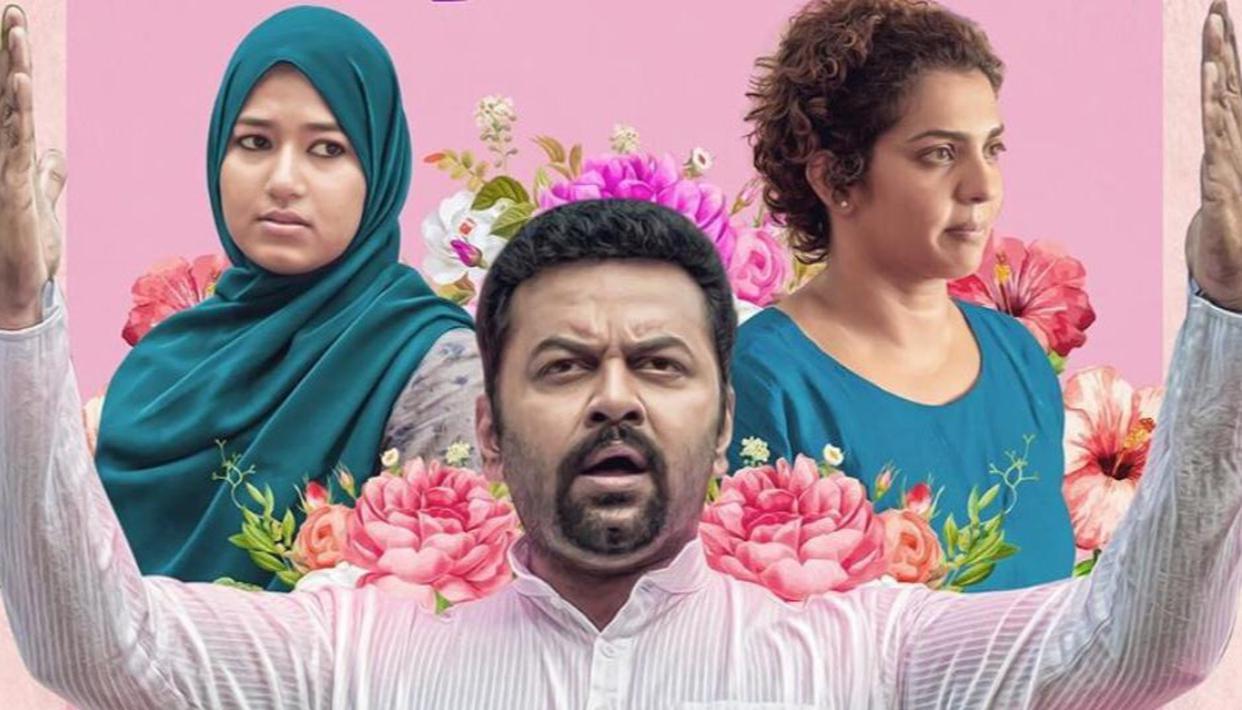 Engaging oneself in debates over the most-reviled and most-defended films is perhaps a challenging task, especially when the debate itself may not be about a film as such, but about how we must watch films today and how we engage their political correctness. Not many Malayalam films in recent times would have generated as much viewers’ anxieties and review polemics as Halal Love Story (HLS) has occasioned. It’s not that the film is the best bet for a good ranking, but it certainly keeps open a new pathway of film sensibility.

The HLS currently streaming on OTT platform sketches the cultural life-world experience of ‘Home Cinema’ making (a post-2000 visual experiment in the Malabar region of Kerala popularised by Salam Kodiyathur and a few others in the background of the third wave migration to the Gulf). A departure in the Home Cinema tradition—mostly located in Malappuram and Kozhikode—was its ‘Islamic’ orientation and its circuits of distribution through local video shops and other outlets. It was known that the Jamaat-e-Islami Hind (JIH)—an organisation working with a mission of political Islam—had consented his projects. That was the period when JIH itself started engaging in the public sphere of Kerala with its print and visual media.

The HLS having set its context in the post-9/11 scenario—with a focus on ‘Islamic’/ ‘Muslim’ subjects—has naturally bred suspicion if it is a JIH-legitimising project (some even raised a question if it is a ‘Jamaat movie’). However, for many reviewers, HLS is a simple but contestable narrative of a group of people belonging to a religious organisation (plausibly like a cultural outfit of JIH) having set upon a telefilm venture. They, however, argue that HLS is basically a satire on ‘the big brother’ vigilante of JIH. Others see HLS as a subtle ‘normalising’ project of JIH in times of Islamophobia. Hence it is characterised as a ‘reductionist,’ ‘sectarian’ representation of the ‘Muslim life’ in Malabar.

HLS is full of such halal (permissible)-haram (forbidden) metaphors with the viewers being left with the option to choose either—albeit having many ‘grey’ areas between. Interestingly, the film begins in a video rental shop with Raheem Sahib (Nazar Karutheni) in conversation with Shaheel (a video editor). Shaheel tells Raheem to do a film as part of a ‘progressive’ act of the organisation. But Raheem expresses his limitations using an interesting comparison of a bus on a downhill drive. This is typically a representation of the ‘agency-structure’ question in HLS, presented in a metaphorical way.

The question of agency was expressed in different occasions in HLS, right from the day they resolved to proceed with the telefilm project. The discussion at a meeting revolves around the question of ‘Islamic’ and ‘mainstream.’ Thoufeeq (Sharaf U Dheen), a teacher with a passion for film, tries to defend his script, and the choice of a director too—Siraj (Joju George). The discussion moves around an “acceptable person for the public” as director. Thoufeeq makes a case for Siraj (as the latter “does not offer namaz” (prayer), and also, he “sufficiently smokes and drinks”!). What follows is a collective consent for this ‘mainstream.’ Then comes the halal/haram problematic as exemplified by a person in the meeting saying, “every act is judged according to our niyya (intention).” The shot after this comes in ‘Paradise Bar’ where Raheem and Thoufeeq make a search for Siraj. Eventually, they settled for a deal with Siraj. Viewers cannot but enjoy this ‘pub’ (haram) negotiation as a metaphor of a paradise (dream)-in-the making!

However, a condition put across before Siraj was too weird—the actors of the film should be from their organization. Though sceptical, Siraj finally gives in. Then comes the moral issues of choosing the lead pair. Raheem and Thoufeeq insisted that a real husband and wife be in place as ‘mixing’ for non-married persons might create moral issues. Later the lot went to a pious couple, Shereef (Indrajit) and Suhra (Grace Antony) who agree to play the role of hero and heroine. Sensing the limitations of an amateurish experiment, Siraj decides to bring in Haseena (Parvathy Thiruvothu) as a trainer. Haseena is atypical of a traditional Malabar Muslim woman with her own sartorial and behavioural ambience.

Haseena tells each to revolt against oneself (‘a mutiny with the self’), and thereby exhorts them to indulge in a conversation with “one’s own assumptions” reminding that “we cannot become characters without fighting these assumptions.” It was from here that the real story begins—with Suhra indulging in an introspection of her past. While the ‘film within the film’ unravels, one cannot afford to miss the real-time relations between Shereef and Suhra.

Suhra’s revolt to her past and her own spontaneous disclosures hurt Shereef’s ego. Since then, Shereef, who was not actually selected but got the last lot upon intervention, began to lead a life under shadow. Initially, Shereef thought that he would be a natural choice as a hero. But that did not happen. Meanwhile Suhra’s ‘mutiny’ to herself amounted to a revolt against Shereef—or at least what he felt like that. This was an interesting turn in the film.

Shereef struggles to negotiate between his religious commitment and family obligations. The contradictions emerging from this manifest in their conversations are subtly depicted in different times of shooting. His bedside register itself is a thinly devised moral code. Meanwhile Siraj, who himself could not lead a stable family life, suddenly recognises the ‘problem’ between Suhra and Shereef. One plausible interpretation of the last scene Siraj added in the script could be that the happy ending be ensured with a hugging by Suhra and Shereef, the hero and heroine—something which Thoufeeq and Raheem could not reconcile to. This is perhaps the crux of many criticisms overlooking the parallel emotional encounters between Suhra and Shereef. They themselves enter into a round of negotiation to decide whether they have to hug each other or not. Though Suhra does not have any problem in hugging, they eventually settled for a deal—not to cause any embarrassment to the organisation! The conversation between the hero and heroine, in the last scene of the telefilm, encapsulates the crux of the HLS.

What followed is a turnaround with Suhra and Shereef hugging even as the camera rolls around the couple. Thoufeeq’s repeated plea for stopping the scene ended up with the cinematographer declaring that he “placed the first cut before they hugged each other. Halal Cut done.”! But Siraj, who insisted a hugging in the script, smiles after the shot, and hugs his team in sheer jubilation. This jubilation has multi-layered implications, especially when Siraj himself had to encounter the loss of warmth in his own family relationship and in the relationship between Suhra and Shereef. The telefilm actually makes room for a revolt within—causing an embarrassment to the organisation being obsessed with its own moral code. The real message comes not from the telefilm (the story of which is not clear enough for viewers), but from the very process of production with deep moral and emotional encounters within.

HLS is essentially a rewinding of the social history of Home Cinema. But critics argue that it is conveniently silent on an array of questions in relation to the ‘correctness’ of statements and actions—which most instant reviewers are suspecting as part of JIH strategy. Needless to say, visual art (in whatever form with whatever quality) is often defined and understood by its capacity to evoke responses. It is true that a universalist paradigm of sensibility cannot be insisted in film sensibility. In most films, certain meanings and practices are produced and reproduced for emphasis, and certain other meanings and practices are neglected and excluded.

By no stretch of imagination does HLS fall into the trap of a (JIH-controlled) mute button on the role/share of ‘Muslim’ in the mainstream cinema. But the ‘Muslim’ struggle with the Malayalam cinema is erroneously referred to as a ‘struggle’ for a ‘reasonable space’ in the emerging ‘relations of production’ in Mollywood. There was apparently no history of people investing in the industry being identified with any religion or religious issues until a few years ago. Of course, there were occasions when caste did matter (as in the case of Vigathakumaran way back in the late 1920s). However, the struggles of the people in the industry were essentially existential—both professional and emotional.

With waves of migration to the Gulf and a consequent ‘Gulf boom,’ a new horizon dawned for the Malayalam cinema since 1980s. Local experiments like Home Cinema that sought to play a bridge-building role between the Malayali diaspora and the home-state emerged on the margins of this ‘mainstream.’ This process eventually led to an array of innovation and experiments. Today, the Malayalam cinema does not need any secular attestation to address a multitude of crises within. Apart from some ephemeral issues related to caste/community/religion (which are now not exclusive problems in the film world), the Malayalam cinema makers are now in search of their own transactional identity—in a technology-driven and receptivity-hyped terrain. Naturally, a good number of ‘new generation’ films are experimentative with challenging themes and new platform setting. HLS is a part of this cultural innovation within all limitations.