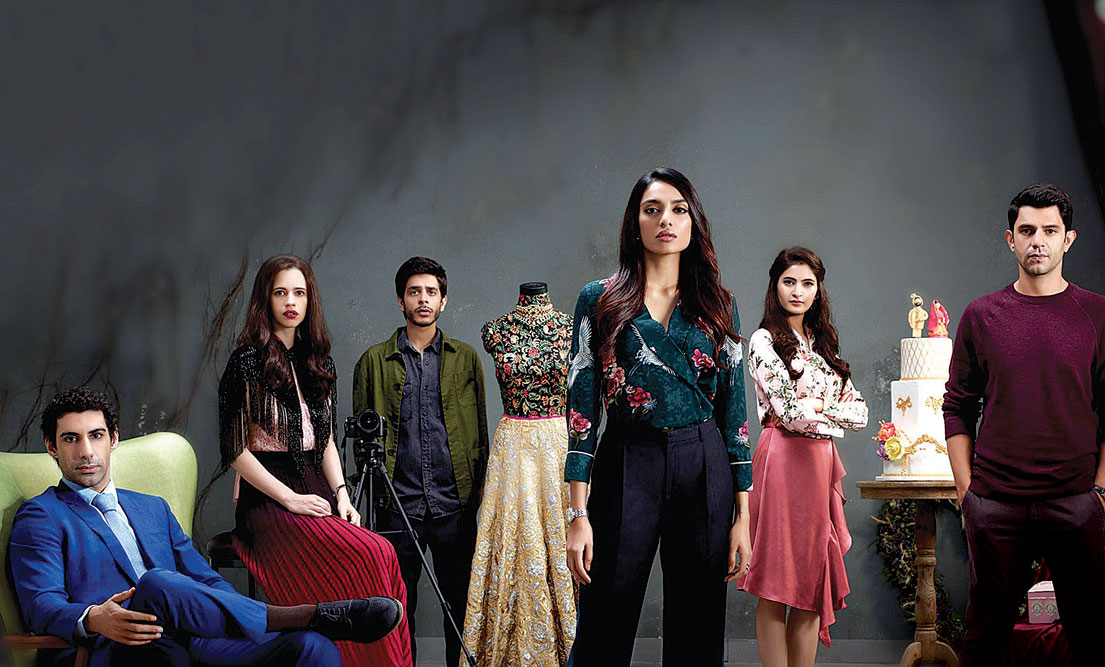 WHEN ARJUN Mathur was growing up in Civil Lines, Delhi, he remembers watching a character called Pinku played as flagrantly gay by Anupam Kher, complete with an orange mohawk, Miami Vice suits, and a hirsute Amrish Puri as ‘Daddy’. He doesn’t remember the name of the movie (it was Mast Kalandar, 1991) but he could sense it was outrageous. Cut to 2019, and in Amazon Prime Video’s new series Made in Heaven, Mathur plays Karan Mehra, a smartly dressed, smooth talking wedding planner running a company with his best friend, the ambitious Tara Khanna, who also happens to be the wife of a socially prominent industrialist family. There’s nothing to suggest Mathur is gay, except for his habit of picking up good-looking men from clubs for commitment-phobic sex.

Bollywood’s superpowers may not have stepped out of the closet, but the content being created by the industry already has one foot out of the door. Amazon Prime Video’s Four More Shots Please! features Umang as one of its four female stars. Mangs, as she is known, is a gym instructor, and is gloriously bisexual. Originally from Ludhiana, she leaves the small town and its narrow mentality, hoping to find freedom to love in the big city. Bani J, who plays her, has become a poster girl for the community. The producer of the show, Rangita Pritish Nandy, says, many young kids write in to both of them every day to say thank you. “Umang gives them the strength to be, to know that they will find acceptance, and even if they don’t, that it’s okay to be them. These are kids in their teens, many older as well. There is so much judgement around us, so little acceptance. When Umang comes out to her family in the series, that scene is the one that has them all rooting for Umang and for themselves. That scene makes them feel that everything will be all right, some day.” Even if the object of their attraction, in Umang’s case, a Bollywood star played by Lisa Ray, refuses to acknowledge them.

The liberty to love itself is a victory. And a luxury for those who grew up gay in the 80s and 90s. There was little LGBTQIA (lesbian, gay, bisexual, transgender, queer, intersexual, asexual) representation for the community to relate to. In 1996, Deepa Mehta’s Fire brought the conversation about alternative sexuality into our living rooms. But the political backlash, and the vandalism of theatres screening the film, put the issue firmly back in the closet. Onir’s My Brother… Nikhil (2005) was a breakthrough with two pleasant-looking, well-spoken leading men who played a gay couple and their relationship, though lacking physical intimacy, was treated with dignity. Then again, a whole decade went by till Hansal Mehta directed Apurva Asrani’s sensitively written Aligarh.

In between, notes Apurva Asrani, who also edited Made in Heaven (created by Zoya Akhtar and Reema Kagti), Bollywood has had a field day lampooning gay characters and worsening the LGBTQ position in society. For every sensitively made LGBTQ film, that found a thinking audience, there would be 10 caricatured gay portrayals for mass audiences, taking us ten steps backwards. So angry was he that he once wrote an open letter to Karan Johar about how he had set the gay rights movement back 10 years by producing the homophobic Dostana (2008), though people in his defence claimed that at least he was bringing the topic into the mainstream.

2016 changed everything. Aligarh was released, where Manoj Bajpayee played the harangued Professor Siras with much gravitas. Soon after came Kapoor & Sons where Fawad Khan played a gay man. There was also an independent movie about young gay relationships, called Loev (2015), and somewhere in between there was Arvind Swamy playing a father who comes out to his son in Dear Dad. So by the time the Supreme Court announced its Section 377 verdict in 2018, homosexuality had already become part of water cooler conversation in many parts of the country. Young people struggling with their sexuality now have access to these films. The same goes for parents of LGBTQ youngsters.

Shelly Chopra Dhar’s Ek Ladki Ko Dekha To Aisa Laga, released earlier in the year, addresses precisely this prejudice. It was Lesbian Love 101 but in detailing the confused response of a loving father, played by Anil Kapoor, to his daughter’s sexuality, it was both sensitive and caring. As Anil Kapoor says, everything takes time. “Accepting a change also takes time. But we need to understand that we need to support and love our kids regardless of everything else. The love should never change. This is what gets us through all troubles and makes our bond stronger.”

2016 changed everything. The liberty of love itself is a victory and a luxury for those who grew up gay in the 80s and 90s

Sonam Kapoor Ahuja, who played the onscreen daughter, says it was her attempt to exercise her privilege with responsibility and choose to do cinema which allows a way out for “all the women —and men—who are caged in what they think society wants them to be, whether it is what to study, what to look like, and indeed whom to love.” Released across 1,000 screens, it has made a modest but not embarrassing Rs 25 crore.

But it is new media, notes London- based academic Rohit K Dasgupta, which has played an important role in queer consciousness and dissemination of queer media. “YouTube and Netflix have provided platforms for non-mainstream subjects and ideologies,” he says. Take the nuanced portrayal of Kukoo, the transgender cabaret artiste in Neflix’s Sacred Games in 2018, and the intense romance between her and the wannabe don played by Nawazuddin Siddiqui, and compare it to the caricature of brothel keeper Maharani in Mahesh Bhatt’s Sadak in 1991. Mainstream movies still have trouble dealing with these themes. As Asrani notes, “It’s not easy from an exhibition point of view as these themes don’t generate great footfalls. I remember feeling gutted after Aligarh saw a thin theatrical audience on its release. Yet, I was getting so many messages every day from people who had loved the film. I realised they were watching the film online; as they were afraid or embarrassed to be seen in a cinema hall watching the film. They were afraid of being found out.”

That is the point Onir underlines, noting how unfortunate it is that mainstream movies have still not moved from the Fire moment. One of the problems is that stars do not want to do roles that question their sexuality. Kapoor & Sons was famously offered to several leads in Bollywood who refused it before it was picked up by Fawad Khan. The other issue is censorship. For his last film, Shab, in 2017, Onir had to battle with the Central Board of Film Certification for six months. “Their complaint was that I had shown a gay couple as normal, kissing, hugging, enjoying intimacy, just as a heterosexual couple would,” he says. Yet another problem is that much of gay Bollywood is still firmly in the closet. Or, as Asrani, says, most of them are out of the closet within the film industry— which is a kind of closet in itself. “Their friends know, people on the set know, and everyone protects their ‘secret’ for them. If anyone lets the cat out of the bag, they just won’t get work again, and the network is thick enough to cut them off. People who are out of the closet and use their celebrity to bring attention to LGBTQ issues are often ostracised from all these camps. So I don’t see actors coming out for a long time. They are too invested in India’s obsession with family and fear losing out on that family audience. Maybe the next generation of actors will find the courage to come out. Right now, there might be two-three film personalities who are out and proud.” He is delighted that he is in that minuscule minority.

One person who hasn’t had much of a problem playing a gay character is the fearless Mathur—this is the third time he is playing a gay man, the first being in a short film written by Zoya Akhtar and directed by Mira Nair, and the second was in I Am Onir. In Made in Heaven, he plays a gay man who makes peace with himself and becomes an activist for the repeal of Section 377 of the Indian Penal Code. Though reality outstripped events in the series, Mathur believes it was important to show the struggle because social attitudes take time to transform. He believes the strong female gaze in the series brings with it a great empathy to the characterisation. “I’m a huge fan of women. They should be running the world,” he says, pointing to his long collaboration with Akhtar. “I worked with her in her first short film, her directorial debut Luck by Chance and now her first digital series.”

Reema Kagti, of Made in Heaven, says the new wave of actors is hungry for good roles and has no inhibition about the character’s orientation. “Arjun was everyone’s first and only choice for Karan. It was the same with Vikrant Massey. We were pleasantly surprised with the other smaller characters too.”

After all, as a character in Made in Heaven says: “Homosexuality is not new to India. Intolerance is.”

Perhaps the answer to it all is authenticity and more storytelling. For Asrani, Aligarh was a collection of pent-up thoughts, emotions and questions that found release after 37 years of being closeted. “Having been in two long-term relationships, the first was eight years and the other is now 12 years old, I felt like I had insights to share with others. Why is a gay man shamed for having multiple partners or for having partners belonging to different ‘classes’ and economic backgrounds? Is it because he is an immoral creature, or is it because he is lonely and is denied the same right to love as everyone else? Why does he only find intimacy in the dead of the night, with a partner who will refuse to recognise him in daylight? That’s where the poem O Beloved Moon in Aligarh stemmed from. A melancholic man is calling the moon his metaphorical beloved; one that will slip into the shadows once the first rays of sun come out.”

It’s time for Bollywood to shine the light on the darkness.