‘Freedom is something you fight for,’ says Deepa Mehta

Deepa Mehta makes her digital debut with a dystopian series. The filmmaker tells Divya Unny how a particular tale can be universal in nature 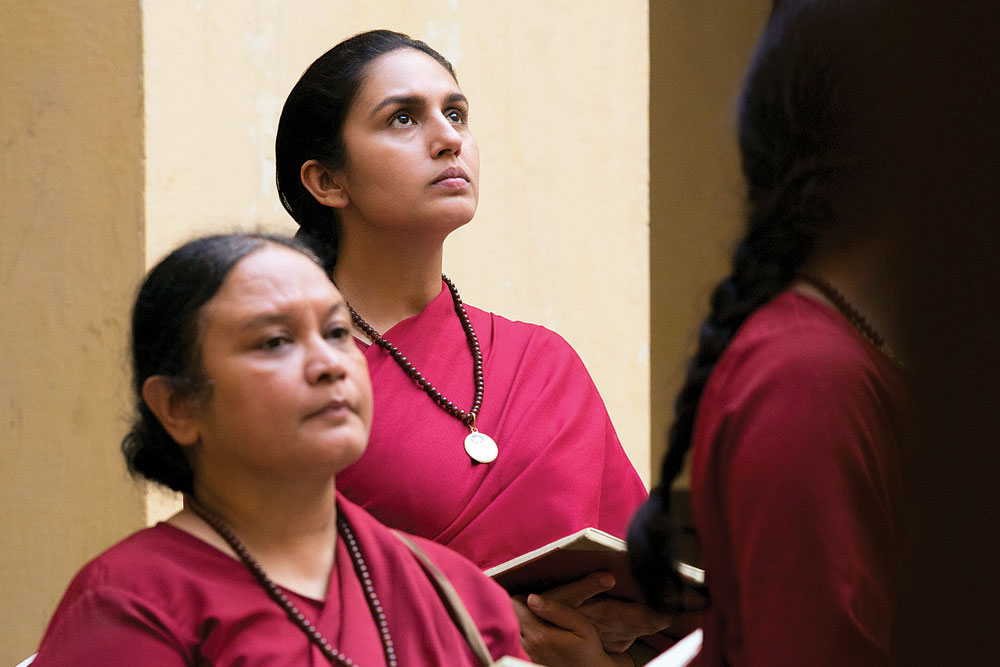 DEEPA MEHTA is back. She is still most celebrated for Fire (1996), which depicted same-sex love in Indian cinema before Article 377 hit headlines, or gay parades took to the streets. Today homosexuality is no longer a crime, and the generation that grew up on Mehta’s trilogy including Earth (1998) and Water (2005), is now living in a different India. It is an India that is modern, yet riled by problems of the past. To understand this new India, there is little surprise that Mehta has chosen to direct a digital show on Netflix, based on author Prayaag Akbar’s book Leila (2017). Leila is set in a dystopian, futuristic town where technology is booming, but everyday life is shackled by religious, caste and creed differences. The characters live in an extreme totalitarian world where women are trained for ‘purity’ and children of mixed blood are sold for money. In this world, ATMs dispense water instead of cash, and the air is so polluted that it rains black. Mehta is the natural fit to tell such a story, as her films have always reflected the social ethos of our country, and challenged conventional mindsets.

When we meet, she is dressed in an oversized white T-shirt, her hair flows down her back, and she sports her trademark double nose-pins. She speaks about her digital debut, and the importance of telling stories you believe in.

Leila depicts some brutal truths about life in India, such as oppressions because of gender or caste. Yet the world is futuristic. How did you succeed in portraying both?

The crux was already in Prayaag’s book. The reality of our social situation, how people are killing each other in the name of god, how religion has become a reason to attack someone instead of a philosophy to live on—all of this isn’t fiction. It is real and it’s as true as every living person here. The world our show is set in is futuristic, and I could very well see what that world would look like. If we have no water to drink in the next few years, the rich will buy it like they would buy clean air, and the poor would suffer. If we continue to cut down trees, and pollute the environment, our rain will turn black someday. With a specific colour palette, sets and performances, I had to make that world believable, and hopefully I do.

The future seems here. Is that a scary reality?

There was a Spanish director called Luis Buñuel. His films are sort of surreal and very deeply rooted in Spain. He once said the minute we are particular about something is when we become universal. The situations might be specific, but the experiences and emotions are universal. What is happening here is also happening in Trump’s America, in Italy, in Hungary, in France, all over the world where regimes are turning right wing. It’s very scary.

The reason I also said yes to doing this show was because the story actually resonated with what is happening with women, with identity, with gender and with totalitarian governments all over the world. It’s a cautionary tale. Through a mother-daughter relationship, you see how we are regressing as a culture, yet every individual is striving to evolve.

The digital medium lacks censorship. Does that give you more freedom as a filmmaker?

Freedom is larger than a thing that someone lends to you. Freedom is something you fight for, and you strive to achieve through your life and your work. If I am in a democracy, but I am still bound by my mind, I am not free. Yes, the digital medium seems a lot more accepting of honest, more direct, radical stories, but I do feel that filmmakers in India today are making so many good films, irrespective. Films that make you think. I didn’t know of Netflix till very recently, when my daughter forced me to watch shows on it. For me, cinema is still about the big screen lights dimming and popcorn. But you need to adapt, and if Alfonso Cuarón could make Roma for a digital medium which then also released in theatres, it must be the right kind of evolution for cinema today.


“If Alfonso Cuarón could make Roma for a digital medium, it must be the right kind of evolution for cinema today,” says Deepa Mehta, filmmaker

After Heaven on Earth (2008), you made Anatomy of Violence (2016), both based on violence against women. We are now seeing women finally come out with their stories. As a filmmaker and as a woman how do you see this change?

I think that the MeToo movement really opened doors for women to express how they have been abused sexually. It all started with the casting couch. I’m a great believer of the MeToo movement but not as blanket accusations. There is a part of me that still believes in due process. There has been, and continues to be, collateral damage of those who are not guilty being accused of inappropriate behaviour with women. The challenge is to discern what is true and what is not. I see thinking women all around me today, and it’s wonderful. All movements don’t start with complete sincerity and complete commitment. They start with a thought. They falter, take a step back, it takes time, and finally then there is some resolution.

Your first film Sam and Me (1991) dealt with immigrants in Canada. Fire was about two women in love, Earth about communal violence and Water about widow remarriage. Your stories have always addressed social conditioning. Did you see a discourse occur once the movies released?

When Fire opened in India, and it was opened in 40 cities I think, it did really well. The response was amazing and it played for three weeks before the controversy started. Fire became a much larger issue—a springboard for a dialogue about the fact that women in India don’t have choices and how dare anybody tell them what they should watch and what they should not. Or what is morally right for them, and what is not. The opposition to these elements, and in support of Fire, was very widespread. It was not only the so-called intellectuals, but also housewives and students. All sorts of people spoke out.

Similarly the first thing that I heard about Earth is that it got a very positive response. It brought up memories of the Partition and people loved the characters that Bapsi Sidhwa had created. And the sectarian war in Rwanda had just happened, so it was at the forefront of everybody’s minds. What was interesting was one of the first reactions to the film when it was released in India was, ‘Why have you made a pro-Muslim film,’ which had me stunned, to say the least. I think if I’d made anything, it was about the vulnerability of all human beings. There is a line in the film spoken by Ice-Candy Man played by Aamir Khan that stays with me to this day —‘We all have an animal within us and it’s our purpose in life to control it, and if we open the gates of the caged animal, god help us all’. Bapsi Sidhwa’s immortal words ring true to this day when we see what’s happening with Trump.

“I’ve spent a lot of energy in grappling with how women are treated. I prefer not to think of it as a fight, because fights are exhausting”

Tell us about shooting Fire. Was that experience liberating?

Absolutely. Fire is not a film that has any kind of message. I wanted to make a film dealing with the elements of life. Fire is about desire. Homosexuality is just an aspect of the film. Fire is not only about a lesbian relationship, but it’s about a manifestation about the lack of choices a woman has which are accepted socially. I do films that concern me and that are of concern to me. It is important to me that women be treated equally in all walks of life. My films will talk about that. It was very easy to shoot. And we had a great time shooting it. Shabana [Azmi] and Nandita [Das] were a treat to work with!

Women’s rights have always been at the centre of your stories. In what ways has growing up in Delhi as a young college- going girl influenced your ideas today?

In college I carried Mao’s Red Book because at the age of 17, I was a dedicated Maoist. I read the book from cover to cover until at the age of 18, I got acquainted with the Cultural Revolution, and the fallout of Mao’s Long Walk. I still admire the man and what he stood for—equality between the haves and the have-nots. Sadly, absolute power corrupts absolutely.

You have mentioned that you grew up in a liberal household where your parents followed Shankaracharya’s teachings. Tell us about your childhood?

I am a big fan of Shankaracharya’s Vedantic school of Hinduism. My childhood was about meditation and doing the right thing as opposed to the right ritual, which was very different. Hinduism has always been a philosophy in my home like many major religions of the world. My mother was, and is still a very big follower of the Ramakrishna Mission and Swami Vivekananda. Just reading about Swami Vivekananda when I was young meant a lot. Having said that I am very aware of the privileges I grew up with. I was sent to boarding school very early and then I went to Lady Shri Ram College in Delhi.

Your father (Satwinder Mehta) was a film distributor in the 60s. Can you tell us how he introduced the world of films to you?

My father was a theatre owner. I grew up in Amritsar, and after kindergarten when I went to pick up Dad at his ‘office’ [Ashok Cinema Hall] I watched movies while waiting for him to finish his work. Dad had a private ‘box’ attached to his office with a rather comfortable couch which I usually sank into, satchel tossed to one side. I was mesmerised by Vyjayanthimala attempting to outdo a cobra, in the dancing department, while swaying to a snake charmer’s flute. The film was Nagin (1954). I was hooked! Dad took me upstairs to the projection room, and I learned from Ram Lal, the projectionist, how reels for 35mm film were threaded, loaded and changed. Then I trudged up to the screen. As I touched the fabric the screen was made of, Dad signalled to Ram Lal, and on cue, I was bathed in the distorted black-and-white image of Pradeep Kumar and his weird lip-sticked mouth—it was pure magic!

Has this passion for cinema helped you fight for your films? Your effigies were burnt during Fire and you were attacked during the shoot of Water.

I love this portrait of me you’re painting as a heroine! But I haven’t fought tooth and nail for anything in life—except for the wellbeing of my mother and daughter. I’ve spent a lot of energy in grappling with the expression of truth and how women are treated. I prefer not to think of it as a fight, because fights are exhausting by nature. I like to stand up for my truths and certain values I uphold, and preserve my strength for showdowns which are inevitable. I never wished to give up filmmaking despite any of this.