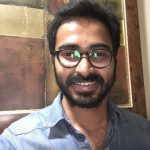 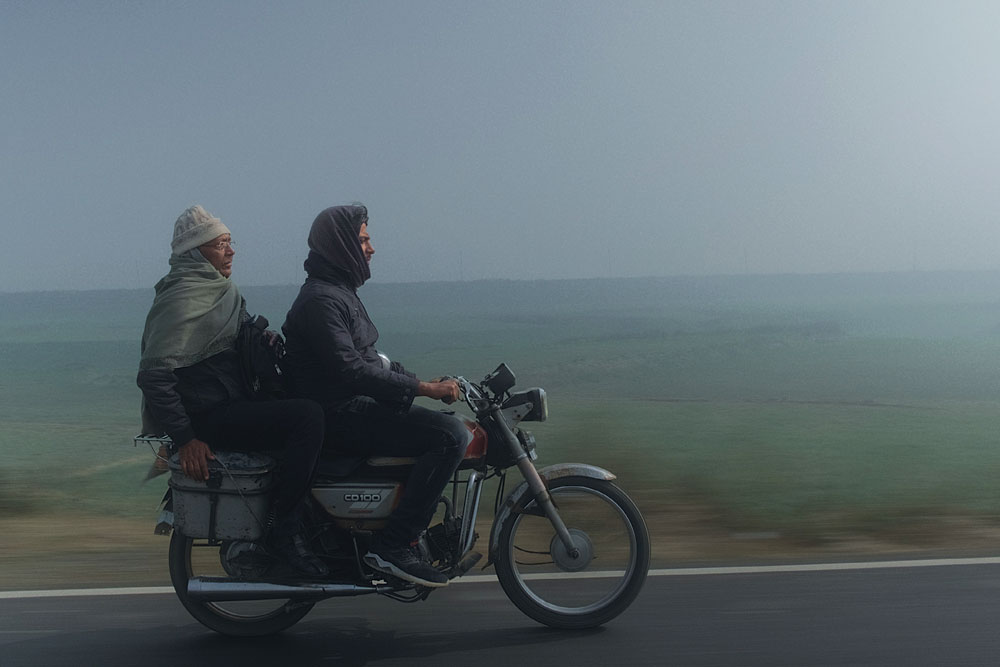 A scene from Dhuin


In one of the defining scenes of Achal Mishra’s second feature film, Dhuin (Mist), the protago­nist (playing a theatre actor in Darbhanga) meets his filmmak­er friend, Shishir Jha, who is in the com­pany of two other filmmakers, Sumit Mishra and Dipesh Chandra. Unlike the primary character, the three filmmak­ers aren’t fictional, but are filmmakers in real life as well. Jha has returned to Darbhanga after completing a filmmak­ing workshop with Iranian filmmaker Abbas Kiarostami in Cuba, and the three filmmakers wax eloquent about the maestro’s cinema. When Jha, who is based out of Mumbai, asks Chandra if he plans to shift base to Mumbai, Chandra responds, “No. For me, Darbhanga is my small Iran.” And Jha replies, “You’re Darbhanga’s Kiarostami!”

Darbhanga is known as the heart of Mithila and is a seat of music and litera­ture, art and culture, but it has rarely been associated with films. However, in recent years, the town has emerged as a fount for newly emerging indie cinema in Bihar. The recently concluded Dharamshala In­ternational Film Festival hosted Mishra’s Dhuin, Jha’s Dharti Latar Re Horo (Tortoise Under the Earth) and the work of their fel­low Mumbai-based friend also with roots in Darbhanga — Parth Saurabh’s Pokhar Ke Dunu Paar (On Either Sides of the Pond), all of which are from this year. At the venue, film critic Namrata Joshi engaged in a conversation with the three directors to discuss the blossoming indie wave in their hometown. She drew comparisons with the CineMadurai movement of the 2000s in Tamil cinema, wherein stories from non-urban settings permeated the mainstream. However, the nascent Darbhanga movement is still far from the periphery of commercial cinema, and the three filmmakers seem content for now within the indie realm.

This new-found spotlight on cinema from Mithila owes much to the critical success of Mishra’s debut feature, Gam­ak Ghar (The Village House, 2019), which won the inaugural Manish Acharya Award for New Voices in Indian Cinema at the MAMI Mumbai Film Festival 2019. The film dropped on MUBI India in 2020 and has gone on to become one of the most popular films on the niche streaming platform. This May, Gamak Ghar was internationally distributed on a few streaming platforms, leading to a review in The New York Times, which noted, “The film’s still, square images feel so much like paintings that any stray movement—the smoke rising in spirals from a mosquito coil, or a palm tree swaying in a breeze—can seem like magic, a picture come to life.” The spotlight on Gamak Ghar brightened recently when it, along with Dhuin, was screened at the Museum of Modern Art, New York, as part of a series on Indian independent cinema.


The popularity of Mishra’s work in the indie circuit has helped draw attention to Parth Saurabh’s and Shishir Jha’s debut feature films, who have both been collaborating with Mishra since Gamak Ghar. While Saurabh was a production manager on the film and an additional screenwriter on Dhuin, Jha was cast in Dhuin for a small yet significant role (mentioned above). Mishra is also one of the producers of Pokhar Ke Dunu Paar, which earned a special mention at the San Sebastian International Film Festival 2022 and is being presented by Anurag Kashyap. Jha’s Dharti Latar Re Horo won the Honourable Mention under the Vanguard section at this year’s Vancouver International Film Festival. The trio has built a strong camaraderie and frequently exchange ideas. The simi­larities in their works can be noticed in their approach to staging time. Through static shots and long takes, they accentu­ate the spatiotemporal experience. Saurabh says, “Minimalism has become our common visual language, and much of it can be ascribed to having to work around limited resources.” Going ahead, he hopes to achieve more fluidity in composing shots, with potentially more resources at his disposal.

Gamak Ghar chronicles two decades of Mishra’s ancestral home in Mad­hopur, near Darbhanga, as it ages and decays, paralleling the deteriorating relationships within three generations of family members. The film explores losing connection with one’s roots and the longing to reforge it. Mishra not only had to make do with a minimal crew, but employing newbie actors also came with its own challenges. He would have liked his characters to engage more with the physical space, but at the same time, he also asserts that “the naturalness in the conversations could only have been brought about by local people and non-actors.” The only trained actor was the film’s protagonist, played by Abhinav Jha, who had to unlearn his craft and improvise. However, Jha stuck to his process of staying in character on set and off-camera to get the mood right. He also followed this ap­proach in Dhuin and Pokhar Ke Dunu Paar, playing the central role in both films.

While Gamak Ghar spans two dec­ades, Dhuin chronicles two days in the life of its protagonist, who dreams of making it big in Mumbai’s film industry. Mishra says, “With the success of Gamak Ghar, I had built too much pressure on myself for my next film and was swamped with several ideas.” Pankaj Tripathi, who was deeply moved by Gamak Ghar, expressed an interest in working with Mishra. “I then started conceiving a film keeping him in mind. But this jumping from one idea to another felt inorganic.”

Mishra eventually went against the tide and, inspired by a personal incident of Prashant Rana, one of his actors in Gamak Ghar, decided to build Dhuin as an even smaller film with minimal resources and a skeletal crew. To forge intimacy with the characters, cinematographer Anand Bansal framed them in a 4:3 aspect ratio. Bansal and Mishra had previously used the same for the first segment of Gamak Ghar, in which they sought to evoke nostalgia and warmth.

Even Saurabh opted for the postcard framing in Pokhar Ke Dunu Paar, which follows a couple who had eloped return­ing to their hometown of Darbhanga due to financial hardships caused by the pandemic. Tension begins to simmer in their relationship as the cavalier attitude of the male irks his partner. The film views life in a small town through the lens of gender. Saurabh astutely portrays the duality in the male protagonist’s per­sonality, who likes to bully and dominate his male friends but becomes submis­sive and vulnerable with his girlfriend. He says, “During the course of filming, I realised the importance of improvisa­tion and not being rigid with the script.” Although he has included scenes of the monsoon in the film, he wishes to intensify the use of nature in his future projects. He is inspired by the work of Mexican filmmaker Carlos Reygadas, in whose films nature becomes an integral part of the narrative. “To achieve that, I would have to devote at least six months to the shoot,” says Saurabh. 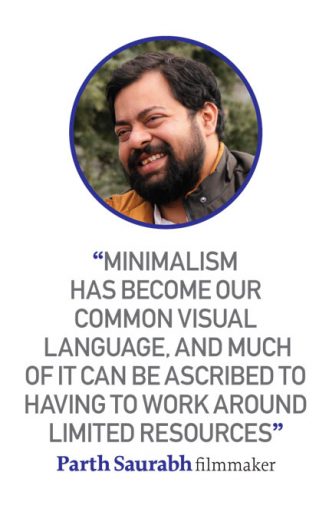 Jha shares the same belief about in­vesting time in cinema, which is why he devoted a year to the shooting of Dharti Latar Re Horo. His film narrates the story of a Santhali couple coping with the loss of their daughter in a uranium mining area around 150 km from Darbhanga. Jha thoughtfully excerpts the personal trag­edy to contextualise the wider environ­mental disaster enveloping the Santhal tribe, who are at risk from their proximi­ty to the mines and the compulsion to mi­grate. The docu-fiction narrative captures the vivid colours of their festivals and, through folk songs, highlights how tribal groups are deeply connected to the forest, their indigenous customs, and their sense of community. However, with changing seasons, ecological degradation comes to the fore as their water becomes toxic. Dharti Latar Re Horo documents a rapidly disappearing world, subsumed by un­checked development and displacement. Jha had only one other person assisting him on the crew, Binod Hansda, belong­ing to the Santhal tribe, who worked as an assistant director, sound recordist, and translator of the Santali language.

As an artist, Jha was always attracted to the visual arts and cinema. Therefore, he enrolled at the National Institute of Design (NID) for a bachelor’s programme in Film and Video Communication. Exposure to world cinema led him to discover the work of Abbas Kiarostami, which deeply moved him. He says, “Kia­rostami’s films are very individualistic and minimal yet so universal. It dawned on me that even such intimate stories could be shared through cin­ema.” In 2016, Jha got the chance to be a part of Kiarostami’s film­making workshop in Cuba, which was a dream come true. He is currently work­ing on a short film based in Mumbai, Song of the Sea, where a tragic love story is set against the backdrop of environmental damage caused by mindless infrastruc­ture development. Jha asserts, “I’m not against urbanisation and globalisation. However, development should not be at the cost of human lives and ecology. We must find ways to progress and co-exist with the natural habitat.” 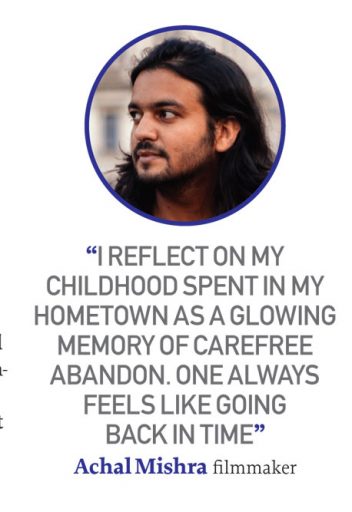 Saurabh’s journey into cinema is also an interesting one. Like many youngsters from middle-class households, he opted for engineering and got into IIT-Kanpur. However, his zeal for cinema altered his career path, and he joined Whistling Woods International for a diploma course in filmmaking. Saurabh wishes to explore the various manifestations of masculinity deep-rooted in popular cul­ture and plans to create a trilogy around masculinity, with Pokhar Ke Dunu Paar being the first instalment.

Mishra has been the node in the triumvirate and has grown to become a prominent face of the new-gen indie wave in India. He grew up in Darbhanga till the age of 10, spent most of his adolescence moving through boarding schools, and later went on to study Film Studies at King’s College London but dropped out in the first year. He chose to spend more of his time at the British Film Institute, watching films almost every day. “That is where I really encountered the filmmakers I love now. It also made me unlearn a lot of things. I was mostly watching Asian cinema: the Japanese masters — Yasujiro Ozu and Hirokazu Kore-eda and Taiwanese filmmaker Hou Hsiao-Hsien. And then I came back and decided to make films,” he says. His next film will also be set in Darbhanga, and he is also making a documentary on acclaimed Hindi writer Vinod Kumar Shukla.

The three filmmakers-cum-friends plan to make an anthology set in Darbhanga in the future. But, until then, they have their own paths to tread and will follow their singular methods of self-expression. They will continue to use each other as sounding boards, and their symbiotic relationship has cer­tainly elevated their work. Mishra says, “The final shot of Gamak Ghar, where the screen fades to black, was Shishir’s idea.” But, in Darbhanga, the cinematic darkness has been perforated by the luminous work of Achal Mishra, Parth Saurabh and Shishir Jha.