11 days, 23 hours, 45 minutes. That’s the time Suresh Joachin took to complete his movie in Tamil on the Sri Lankan situation 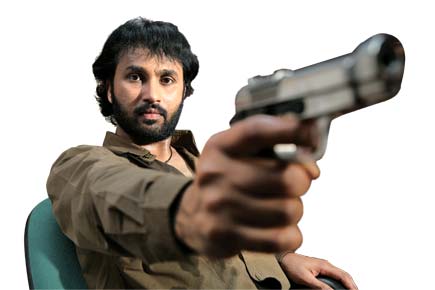 
For the record, Suresh Joachin will possibly do anything. He has promised himself that his name will feature at least 500 times in the Guinness Book of World Records before he dies. And in his 51st successful attempt, he has actually managed to merge it with another subject that evokes equal, if not more, passion in him: the ethnic conflict in Sri Lanka. The Jaffna-born Joachin has just produced Sivappu Mazhai (Red Rain), a Tamil feature film in the backdrop of the Sri Lankan situation. From scripting and casting to editing and first screening, he completed the 140-minute film in 11 days, 23 hours and 45 minutes. A new world record.

“In 1990, a 75-minute thriller called The Fastest Forward was made by Russ Mallin in the UK in 13 days. That was the last record. Now it is being replaced by Sivappu Mazhai,” says Joachin with pride. The film, according to Joachin, was completed as per the strict parameters laid down by the Guinness authorities: it should be at least 75 minutes long; the process would begin with the first meeting between the producer and director to discuss the theme of the film; and the completed film should be screened for Censor Board officials.

Joachin, however, is enraged that people think the film is a mere gimmick. “This film is not being made solely for the sake of the record. These are false allegations,” he says, “By aiming for a Guinness entry, I was just canvassing for world attention. This film is my attempt to turn global attention towards the sad state of affairs in Tamil-dominated regions of Sri Lanka. I hope the Guinness entry, too, will help in this regard.”

Joachin left Sri Lanka as a teenager at a time when violence had escalated between the LTTE and the Simhala-majority government. Far from feeling despair over the extent of bloodshed in his homeland, he says he is not ready to be part of yet another round of the blame game over responsibility for the pathetic situation of his countrymen. He prefers corrective action in the place of extreme hate and mutual distrust. Above all, he says, he believes in peace, plurality and peaceful co-existence.

Presently settled in Canada, Joachin wanted to focus attention on the plight of children in Jaffna and its surrounding areas, which witnessed one of Asia’s longest-running wars. He also wanted to comment on the historical and social bonds between Tamils of Sri Lankan and Indian origins and promote interaction among them.

However, Joachin, who plays the lead in the film, makes it clear that Sivappu Mazhai is not propaganda cinema. Directed by V Krishnamurthy, the film, like all commercial ventures, has humour, action, romance and music. It also has Kollywood’s top film personalities—from actress Meera Jasmine, who plays female lead, to popular comedian Vivek, master lyricist Vairamuthu and music director Deva—lending their names to it.

“I am confident of the commercial viability of the film, as it promises the best of Vivek and Meera Jasmine. It will definitely be a rare experience for viewers. Vivek’s humour was at its best in the film. It was so difficult for me to suppress my laughter while he was doing his scenes. I had to be warned against laughing, since I was acting as the hero,” says Joachin.

On 3 June, the final day of the project, the film was screened for Censor Board members. Joachin was asked to snip certain sections which the Censor Board felt might adversely affect Indo-Sri Lankan relations. But he is confident that the cuts will in no way affect the flow of the story. The film will be screened in India in the first week of July. Joachin also plans to travel the world with the film to influence opinion against genocide and civil wars. “Peace alone will triumph. Racial discriminations must end. People must be allowed to live with dignity,’’ he says.

After the successful completion of Sivappu Mazhai, he is aiming for “another record breaking film”. “Twenty-five directors representing Hollywood, Bollywood, Tamil, Telugu, Malayalam and Kannada film industries will join together for my next project, which will begin in September. I will act as three different characters in the film,’’ he says. And a third film project will begin in February next year in Hollywood. “Though a complete Hollywood film, it will have an Indian actress as the heroine. I myself will be the hero,’’ he adds.

Joachin is convinced that Guinness records are the way to go if he wants to make a difference. Having both Canadian and Australian citizenship, Joachin was eager to engage in social work right from his childhood. “When I was in Jaffna as a school-going kid, the need to help the suffering millions had started disturbing my conscience. Then I started exploring possibilities of getting funds. In 1991, I left for Australia, and that’s where my life took a turn,” he recalls. He was watching a TV show in which Michael Jackson was performing to raise $48 million for underprivileged children. “I reached the conclusion that only a celebrity can raise funds and help others in a big way. So I discontinued my studies to become a chartered accountant, and started my efforts to gain celebrity status,’’ he said.

“The celebrity status is now helping me raise funds to help the needy,’’ says Joachin, whose first world record was 1,000 consecutive hours of countryside running. He has also drummed continuously for 84 hours in Switzerland, as well as run on a treadmill for 168 hours to cover 659.27 km in France. Bowling for 100 hours in Canada, carrying a 4.5 kg brick in an ungloved hand in an uncradled downward position for 126.675 km, non-stop crawling for 56.62 km, 100 hours of continuous dancing, 24 hours of moonwalking—these are just few of his peculiar Guinness records. Most remarkable among them is his 6,000 km-long World Peace Marathon, which began in Jerusalem at midnight on 25 December 2007 and ended at 5 pm on 24 June 2008 in Sydney, Australia. During the marathon, he crossed 88 major cities in 54 countries, handing over symbolic peace torches to dignitaries at each place.

“I spend most of the money I get out of these projects on suffering people, especially displaced children. What else can a man who left his own country in search of peace look for? This is not charity, but an effort to pay back. My cinema, too, will play the same role,” says Joachin, convinced of it.