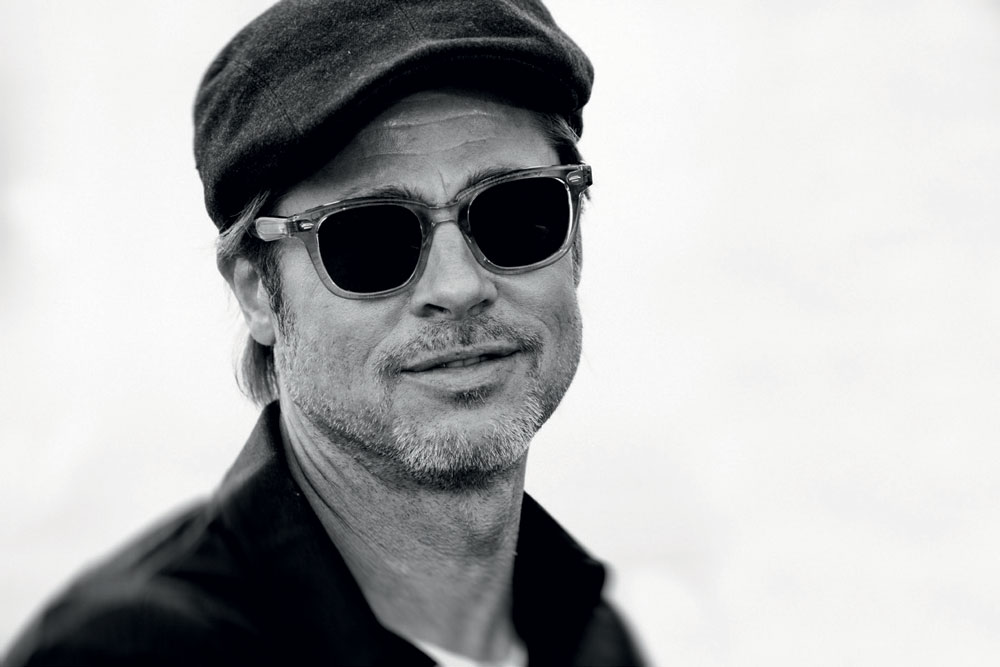 
EARLIER IN FEBRUARY, Brad Pitt won an Oscar for his supporting act in Quentin Tarantino’s Once upon a Time in Hollywood, in which he portrays a loyal stuntman to Leonardo DiCaprio’s character.

What does Hollywood mean to you?

Well, I live in Hollywood. I live kinda near the sign, under the sign. I can see the sign. Hollywood is the place to me where stories are told and sides of us are revealed, stories that make us laugh and cry or show us ways to be. It’s a microscope into human nature. That’s Hollywood to me. And then there’s, I guess, the old flash side of things, but that I’ve never been drawn to.

This is your first role with Leonardo DiCaprio. Did you enjoy it?

Not really, he’s overrated [laughs], nah, he’s a great egg and I got a lot of respect for him coming into this, I mean the mark he’s left on cinema. His contribution already is quite extraordinary. Going into this thing, when it’s kind of on your back there’s pressure that comes with that responsibility when you have someone of Leo’s calibre, he’s going to be holding up the other end of the table and that’s a relief, and for us, we more or less popped up at the same time, we both have grown up in the same ecosystem of filmmaking of our community, we both had to negotiate our way through it to survive. When I say survive, it’s an industry that can chew you up and spit you out pretty quickly. I really respect his choices and what he has done, because of that we have this instant reference point, we have both lost that freedom of privacy in a way. There’s a lot that we can relate on. And us doing this film and understanding this camaraderie about an industry that we love and hate and ultimately adore. It was just so automatic for us, it was really comfortable from day one and I think it shows, you can’t fake it.

What do you think about streaming?

You know when a job ends you are hustling for another job, and most of the industry is that: actors and crew trying to get work. Beautiful things are happening with streaming now, because more and more people, more than ever, talented writers, actors, directors are getting opportunities that were not available before. Because of that we are seeing the explosion of talent. I mean really compelling. And as actors watching other actors, I’ve found so many people that are just compelling. And they’ve always been there. So, in this time of streaming, we’re gonna see it, we’re gonna see more and more talent given the opportunities.

Did you ever have a MeToo experience?

You mean the casting couch thing? When I was first starting out, I certainly met a couple of predatory people, when you are really vulnerable, when you haven’t worked, I think people are most susceptible. Especially moving out here from the Ozarks and not knowing what’s what and someone tells you that this is the way. I certainly ran into a couple of those people. I’m not comparing myself to any of [MeToo] people or experiences that have been illustrated in the last couple of years by any means. I’m just saying the vibe was there. But at the same time, I just gravitated towards good people, who were smarter than me about this industry or wiser than me in life. And I don’t know. It’s made the difference. I don’t want to spend any time on this, but I think it’s really important recalibration that’s been happening here in the last two years, and that’s needed.

Do you still enjoy acting?

Oh, I still enjoy it. Absolutely. And the people I get to work with. But it’s really important to me, like, if you’re going to spend time, who are you spending that time with? And on what?