Politically correct it is. And the references are a bit obvious. But watch it for the palette and the 3D experience. 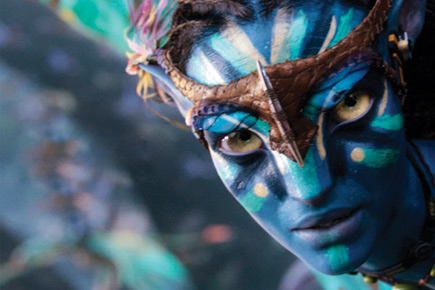 Politically correct it is. And the references are a bit obvious. Watch it for the palette and the 3D experience.


The wide release of Avatar in the middle of the climate meet at Copenhagen may be unintentional, but it is prescient. The film shows you an extraordinarily beautiful planet, a moon actually, called Pandora. It is a pre-industrial, pre-agrarian world and the colours, the vegetation, the birds, the animals, the evolved intelligence are from the garden of Eden. Our own blue planet may have looked as virginal a hundred thousand years ago.

But Pandora has been occupied by a military-industrial complex from Earth, obviously the US, and the script makes a few references to the ‘shock and awe’ campaign and ‘fight terror with terror’ strategy of the US, just in case you missed the Donald Rumsfeld-like character Colonel Miles Quaritch (Stephen Lang), who leads the operation to decimate the home of the indigenous tribes who inhabit this demi-paradise.

The year is 2154 and the Yanks have a sneaky way of combining the DNA of humans and the local Na’vi tribe to create an ‘avatar’ who can slip into the population to gather intelligence. Interestingly, director James Cameron has given the Na’vi characteristics of Native American tribes—the ‘whoops’ of battle, the colourful body paint, the use of bow and arrow, the tradition of living in harmony with nature and the asking of forgiveness from animals after killing them for meat.

Certainly, Avatar is politically correct. But is it too correct to be challenging or even entertaining? The protagonist, Jake Sully (Sam Worthington), is an ‘avatar’ who starts off as part of the system before he turns sceptic, then conservationist and finally, rogue warrior for the locals. He goes native with a vengeance and offers a critique of our polluting, greedy, violent civilisation.

But you have to watch Avatar for its breathtaking palette, and for a 3D experience that is as astonishing as the discovery of perspective in painting was then. And, of course, for the attractive Na’vi lady (Zoe Saldana) who fires two well-directed arrows at Colonel Quaritch.