What has gone wrong with Ashutosh Gowariker? 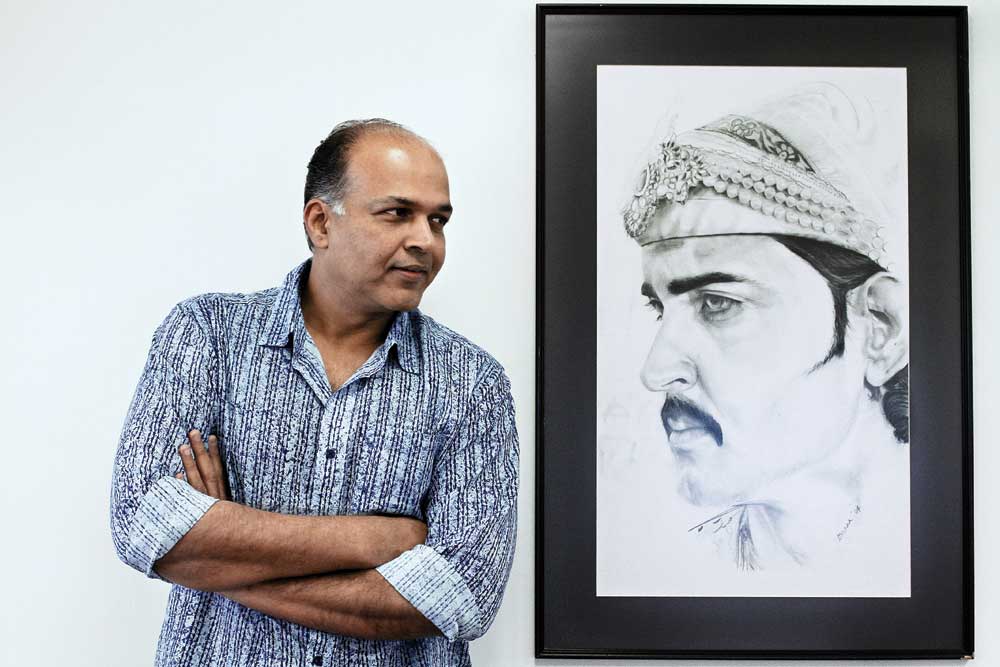 “WHAT IS THE fastest film you have made?” A puzzled Ashutosh Gowariker thinks for a moment and then says, “Baazi. I made it in just 80 days.” Gowariker, seated in his Khar office in Mumbai, ponders a while longer and adds, “I really do take very long to make my films. I want to be like Alfred Hitchcock and make films quickly.” But it would seem that speed and pace are not what the filmmaker need worry about.

Gowariker’s last release Khelein Hum Jee Jaan Sey (2010) was another epic historic film with a star cast of Abhishek Bachchan and Deepika Padukone. Based on the 1930s Chittagong Uprising, the film was seen as a ‘noble effort’ which sadly did not impress either film critics or audiences. Six years later, he is back with perhaps his most expensive film, Mohenjo Daro, and he knows he has a lot riding on it.

Right at the start of Mohenjo Daro, a disclaimer states that the Indus Valley Civilisation has been open to different interpretations by various historians. This sounds like a warning to the audience from Gowariker who perhaps does not want to take responsibility for the authenticity of the plot. Cut to the first scene of the film, and a crocodile literally leaps out of water like the Loch Ness monster to attack Sarman (played by Hrithik Roshan). Sarman returns home victorious after fighting the crocodile, heads off to sleep only to see a unicorn in his dreams, which sets the tone for the rest of the film. During the course of the movie, Gowariker attempts a political allegory, and tries to find connections between the ancient civilisation and present day India—taxation, corruption even an anti-dam agitation figure in the movie. However, despite all the concerted effort, the film is not setting the box office alight.

Doubts over the film were first raised when the promo released a few weeks ago. The costumes, the language as well as the choice of title were criticised and set social media tittering. Gowariker was quick to retaliate, saying that he asked himself the same questions when he started scripting the film, but he stuck to the interpretations of historian Jonathan Mark Kenoyer, who is a professor at University of Wisconsin-Madison. “For instance, the name Mohenjo Daro was discovered in 1910 when the first excavation happened. How can I call it Mohenjo Daro then? I kept wondering if I should call it something else out of my own imagination, but then stuck to Mohenjo Daro.” Gowariker chose familiarity over historic fact.

Gowariker’s intention was to bring to fore the glorious civilisation that was founded in 25th century BCE. “The emotion that we feel when we go to New York or Paris or even Agra is often unparalleled. We are more often than not fascinated by the culture, politics, society and tradition of a particular city. I was fascinated by the Indus Valley Civilisation. I felt a strong need to bring to screen an era we know nothing about but are inspired by,” says the filmmaker, who has a fondness for period dramas. His love for creating new worlds ensured that he got most of the aesthetics of the town right. To build houses, he used bricks which were the same size as those used by the ancient civilisation. Also, the Great Bath is an exact replica of the original one; since a white material was found on it during excavations, the director used white chuna for the set. Despite his research, the film has left historians unimpressed.

Where is Gowariker going wrong? “In his selection of subjects,” says trade analyst Komal Nahta, “Nobody has time for boring films now. When I met him prior to the release of Khelein Hum Jee Jaan Sey, I asked him why he wanted to make this film. He told me that he was fascinated by this historic subject, which no one had heard of. Same is the case with Mohenjo Daro. We have learnt about it in our History textbooks. But ask around, and I am sure most people wouldn’t want to know about it now. Also, the film could have been set in 2016 and it wouldn’t make a difference because the plot was nowhere connected to the civilisation.”

Gowariker has been one of the most revered filmmakers of the country, ever since he made the ultimate coloniser versus colonised saga Lagaan (2001). When he set out to make that film, he’d done two small-budget films, Pehla Nasha (1993) and Baazi (1995), neither of which had done well at the box office and few thought he could pull a rabbit out of a hat. He had the script of Lagaan in hand, but the odds were against him. The audience was hostile towards sports-based films and period dramas did not have too many takers. Add to that, Gowariker did not have any hits to his credit. However, Aamir Khan saw the script’s potential and not only did he decide to play the main lead but also produced it. “Yet, it was the attention to detail in costumes by Bhanu Athaiya and the sets designed by Nitin Desai, with guidance from Gowariker, that made the film authentic,” says Nahta.

Gowariker wasn’t fond of History in school and found it difficult to remember dates. But Lagaan’s success took him back to the subject and encouraged him to explore it time and again. Lagaan’s Academy Award nomination for Best Foreign Language Film catapulted him to the top of the league almost immediately. For the most part of his career, he stuck to his strengths—research and a strong plotline—which became his success mantra. In Swades (2004), he tackled the problem of brain drain and the lack of rural infrastructure. In Jodhaa Akbar (2008), he narrated the story of religious tolerance between a Hindu girl and a Muslim boy. As Gowariker says, “The concept of Jodhaa Akbar came from the germ of an idea I had on religious intolerance. Taking off from a scene in Mughal- E-Azam, Hyder Ali, a writer, asked me what the relationship between Akbar and Jodha could have been,” he says. The beauty lay in the detailing. Be it the nail-biting climax of Lagaan, the heart-wrenching scene where Shah Rukh Khan gives a five rupee coin to a little child selling water in Swades or even a progressive scene like Jodhaa teaching Akbar how to write his name— Gowariker clearly knew how to weave together plot and emotions with finesse.

PERHAPS, LACK of detailing, the absence of a strong plotline and too much experimentation post Jodhaa Akbar are turning out to be Gowariker’s nemesis. With What’s Your Raashee (2009) and Khelein Hum Jee Jaan Se, his concepts and ideas started to weaken. With Mohenjo Daro, he has hit rock bottom. “Ashutosh set up a more realistic style within the mainstream cinema with Lagaan and Swades. In all three films, Lagaan, Swades and Jodhaa Akbar, he was trying something new and different and the films worked well. Perhaps in the new films he has tried to experiment, which hasn’t worked. Most of his films are historicals and it’s a genre which has been tricky recently,” says Rachel Dwyer, professor of Indian Cultures and Cinema, SOAS, University of London. Dwyer compares Gowariker’s work to that of Sanjay Leela Bhansali, and says that history as romance and spectacle works well, the way it did with Jodhaa Akbar. “However, Mohenjo Daro is a costume drama. It doesn’t feature historical characters and is about an important moment in Indian history about which we don’t know enough,” she explains.

According to film aficionados, the success of a Hindi film rides on the presence of a popular actor and good music. Film exhibitor Akshaye Rathi, owner of Rathi Group of cinemas, says that with Mohenjo Daro, Gowariker has failed in both respects. “Hrithik Roshan is undoubtedly popular, but when an actor does one film in two years, the audience gets used to seeing other actors and quickly replace their favourites. In this industry, ‘out of sight is out of mind’ and that is perhaps what the [box office] figures of Mohenjo Daro are suggesting.” He also blames the lack of quality music in three of Gowariker’s last outings for the failures of his films. “Music needs to pick up at least a month before the release of the film. But there is not one song from his last three films that anyone can recollect,” says Rathi. Gowariker himself laments that the biggest reason for What’s Your Raashee’s debacle at the box office was too many songs but no memorable ones.

Each time Gowariker has chosen history for inspiration, he has had to face a backlash from historians, archaeologists, etcetera. However, he has stuck to his guns. “When I planned Jodhaa Akbar, I had the support of the Jodhpur royalty who were Jodhaa’s descendants. Because history keeps getting rewritten there are debates between historians. So in this case what you can do is read one book and stick to the facts in that. I have to choose one train of thought, which I think is correct [in] my belief. I need to have conviction from one historian. There will be arguments, and one cannot stop that,” he explains. However, Gowariker admits that the failure of Khelein Hum Jee Jaan Sey was because he made a biographical film, which lacked the sizzle that is necessary to keep an audience hooked.

Gowariker’s women characters used to be the strong point of his cinema. He even made a woman-centric daily soap called Everest, which had a well-etched lead character whose life’s ambition was to climb Mount Everest, even though it failed to garner the desired TRPs. “It is always interesting for me to see a relationship between a man and a woman. A man learns a lot from the woman. A man does give protection to a woman, but a woman gives him lots of wisdom. Perhaps that is the reason why I write strong women characters,” he says. But with Pooja Hegde’s insipid act in Mohenjo Daro, this hardly rings true.

Despite three flops, Gowariker is not a director to write off yet. Film exhibitor Akshaye Rathi says, “The big problem is the money lost on these ventures. When films like Ugly or Raman Raghav flop, the industry doesn’t make a big noise about Anurag Kashyap’s failure because they are not big-budget films. But with over Rs 60-70 crore riding on a film, Gowariker has plenty of questions to answer. Nahta, however, feels there is still hope for the filmmaker. “He has tonnes of experience behind him and he also has great cinematic sensibilities, but he really needs to learn his lesson. And the lesson is: stop making historicals and if you do, make it relevant.” Or else, like the recurring unicorn in his film, Gowariker’s brilliance too may end up as just another mythical legend.