It is an important film, but does not impact poignantly enough 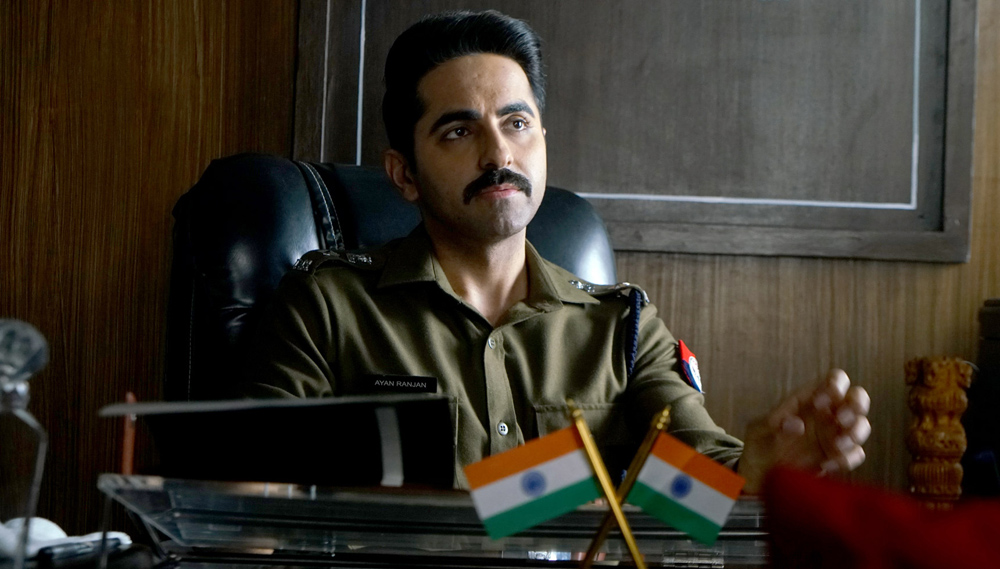 ‘Article 15’ is a film which demonstrates that the authentic depiction of social realism alone does not make for an effective communication of ideas. In an early scene in the movie, a Police Officer called Ayan Ranjan (Ayushmann Khurrana) is on a highway, being driven to his new posting. Bob Dylan’s ‘Blowin in the Wind’ is playing on the soundtrack. For a moment – intentionally so – you are transported to a liberal, freethinking society in the West.

Then Ranjan’s car stops at a village, and his utopian notion of a beautiful countryside and its cultured people is rudely shattered. His Junior Officer and driver won’t even drink water from the lower caste residents who inhabit it. This IPS Officer has travelled and lived all over the world, and says that he tells people wherever he goes that he is proud of belonging to a fine, syncretic cultural tradition like India’s. But here he is, in the backwaters of Uttar Pradesh, having to come to terms with the fact that caste is the single defining aspect of every human being in this place, and that the consequent prejudice based on it, shapes every relationship, professional or personal.

‘Article 15’, which is a movie title sourced from India’s constitutional imperative which forbids discrimination based on caste, religion, race, and place of birth, is flouted every waking hour here. Ranjan’s ‘punishment posting’ turns out to be a bitter reorientation on the reality of rural North India. The film is loosely based on the story of the two girls from Badaun who were found hanging from a tree, a haunting photograph on the evil that lives after us. It circled the globe in 2014.

‘Article 15’ is about a police investigation on this incident that was intentionally botched to contain the social and political ramifications it triggered. With so many angles in that complicated tragedy, this movie simplifies it to one story, told from a single perspective – that of the protagonist. This gives you a tunnel vision. The movie works well for the first hour of the film, when you follow Ranjan’s rage as he uncovers the depth of dissimilation in the layered social system to which the two girls belong, the deceiving chicanery of his own police force, and the manipulating guile of the higher ups who want to derail the progress he is making in the case.

But the larger plot, surely, is about an entire community and a benighted caste system in which looking for justice means an unravelling of social and political ties. We need to see more points of view that are evocative of the fear and horror that these possibilities open up in such a stratified society. Instead, considerable time is spent listening to long telephonic conversations between Ranjan and his girlfriend, Aditi (Isha Talwar), in which he updates her on what we (the audience) already know.

Then there is a sub-plot on the flogging of Dalit men (a reference to the Una incident of 2016), and a passage, shot in documentary style, on the horrific process by which a manual scavenger goes about doing the appalling work designated to him by caste. All this is seen from the observational perch of a privileged outsider – not from a victim or a perpetrator.

Though valuable as documentation, these scenes are diversions and cause us to lose focus on the investigation. Also, though placed centre stage throughout, actor Ayushmann Khurrana is not at his best. He is too intense and uptight in the role, and too carefully manicured in his appearance and deportment to be convincing as a Police Officer at the end of his tether. It is only when we get to the final sequence, the combing of a large water body to look for a third girl who may have escaped the lynching, that Ayushmann gets his mojo back, and the film regains momentum as it approaches its denouement.

Beautifully shot, with early morning mist hanging over the horizon, and torchlights piercing the night like fireflies, ‘Article 15’ certainly gives you a lot of ambience. It is an important film, but does not impact poignantly enough.