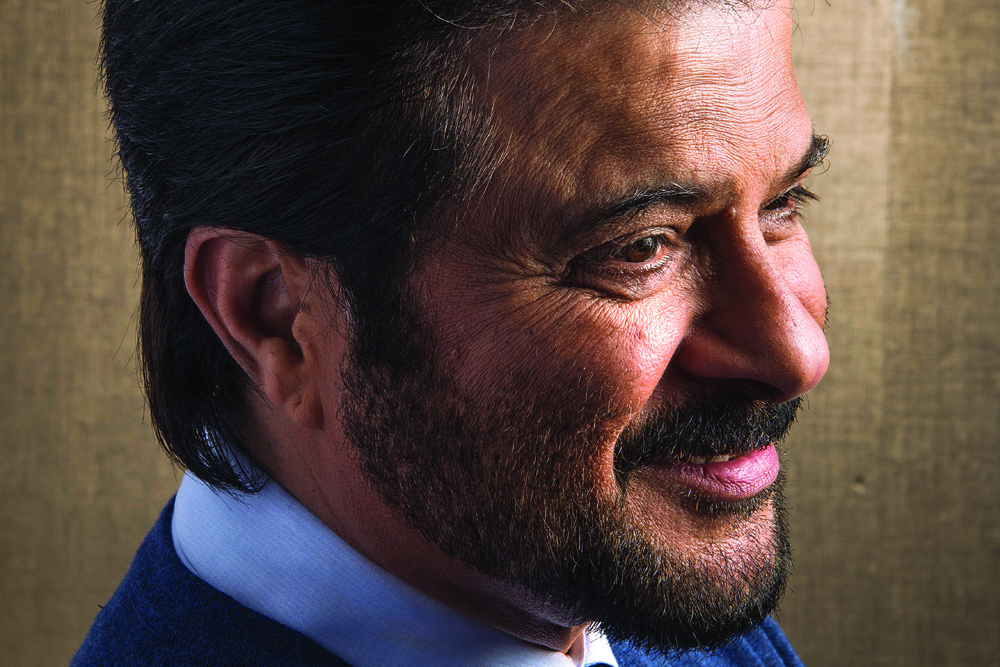 
THERE’S A SCENE in Netflix’s AK vs AK, an extraordinary meditation on fame and stardom, when director Anurag Kashyap breaks down and talks about his midlife crisis. How he has two broken marriages, one child to whom he wants to be a good father. He is saying this to Anil Kapoor, playing a version of himself, who roars back: ‘Don’t you think I’ve had mid-life crises? I have three children, a marriage that has lasted 36 years. Do you think it’s easy? To run like a dog? To dance like a monkey?’

He forgot to add that he’s been a star for over 40 years—far longer than he acknowledges. He tells me, “I remember going to Shirdi to pray to Sai Babaji for a break in the Mumbai film industry. I had just done a Telugu film but was getting no work in Mumbai. A busload of tourists descended on me and the girls started crowding around me for my autograph.” It was 1980. They had just come down from Andhra Pradesh, where his first film as a lead actor, Vamsa Vruksham, a Telugu film directed by Bapu (who had directed his producer brother Boney Kapoor’s first film Hum Paanch) had become a success.

That sums up Anil Kapoor’s extraordinary career. A certain respectful disregard for his stardom, the anticipation of his own imminent crises, a complete surrender to whatever movie he is working on, and total dedication to his craft. Long-time collaborator and director Subhash Ghai says it best: “He is a man in a constant and ruthless search of excellence.”

So whether it involves sitting down in the middle of Mumbai’s Grant Road, bruised and battered, but still asking if the take was good, for AK vs AK, or stopping the car and asking a passerby to give him the shirt off his back because it suited his character in Mashaal (1984), he will do it. He will do it, whether it means shaving his chest for a role in Ahsaas (1979) which required someone younger looking (a role which he didn’t get eventually) or removing his moustache for the first half of Yash Chopra’s Lamhe (1991).

In a career that began in 1979, he has reinvented himself several times. He was the beloved tapori (vagabond) in movies such as Tezaab (1988), Ram Lakhan (1989) and Awaargi (1990). He then did more dramatic roles in movies such as Virasat (1997), Taal (1999) and Pukar (2000), for which he won the National Film Award for Best Actor. “Then something happened to me while I was shooting Honey Irani’s Armaan [2003]. I decided I had to change what I was doing.” He did, starting off a successful spree of mainly comedic roles such as No Entry (2005) and Welcome (2007). “I realised if you’re a comedic actor like Steve Martin, Peter Sellers, Walter Matthau or Jack Lemmon, you can be ageless,” he says.


When I dream it is about characters I want to play. Not homes, not thousands of fans clamouring for me, says Anil Kapoor

At every point, he has taken risks that have eventually paid off. It could be taking the role of gameshow host Prem Kumar in Danny Boyle’s Slumdog Millionaire (2008) after being told by son Harshvardhan Kapoor to do so immediately—reminding him of the poster of Trainspotting in his office. It could be deciding to do Zoya Akhtar’s Dil Dhadakne Do (2015), where he hesitated to play Priyanka Chopra’s father.

“Because you had to go grey for the role?” I ask. No, he says, “Because we came close to playing romantic partners.” Until his son reminded him that he was playing a character, not himself.

And Anil Kapoor has never been afraid of playing it different. “I remember for 1942: A Love Story [1994] I had to play a lover who would climb a balcony, Romeo and Juliet style, to woo the woman I loved. I told Vinod [producer director Vidhu Vinod Chopra] why don’t you take a younger star like Aamir or Bobby Deol? Why me? But both brothers [producer Vir and Vidhu Vinod] were insistent on taking me,” he says. He was 38 then and decided he had to start taking care of himself. “I started jogging, exercising, I lost weight, I cut my hair.” In Eeshwar (1989), he played a grandfather for a portion of the film. He cites superstar Rajinikanth as inspiration. “We were acting together in a film called Bulandi in 2000 where he was playing my father and I saw he was so secure with himself. He needed no external validation as an actor,” says Kapoor. “When I dream it is about characters I want to play. Not homes, not thousands of fans clamouring for me.”

THAT MAY ALSO be because he has secured a level of comfort with his large, tree-covered home in Juhu where a lift transports you to the floor occupied by whichever Kapoor you want to see: the parents, actor Harshvardhan, producer Rhea or actress Sonam Kapoor Ahuja (while she was living there). It is miles away from where Kapoor grew up, in Tilak Nagar (Chembur, Mumbai) in a one-room set with a kitchen, which housed Boney, Anil, Sanjay and their sister Reena, along with the parents. “There were 36 tenants in each building in that area. We used to play football, using our slippers as goal posts and forget them every day, with our mother shouting at us. We enjoyed that era,” says Boney. Their father suffered a heart attack in 1976, and Boney stepped up to take on the production of Hum Paanch. “Anil was with me every step of the way,” says Boney, who graduated a year earlier than Anil from St Xavier’s College, Mumbai. He also played his father in a theatrical production, for which they rehearsed, but with Anil falling ill, he couldn’t perform it.

Their father, Surinder, grew up in the same street in Peshawar (now in Pakistan) as Dilip Kumar’s brother and Shah Rukh Khan’s father. Partition brought them to Meerut. Their grandfather finally handed over their father to cousin Prithviraj Kapoor who put him to work in production, most memorably on Mughal-E-Azam (1960). From there, Surinder Kapoor stayed with Prithviraj Kapoor, and when Shammi Kapoor’s assistant went away for a while, his wife, actress Geeta Bali, asked him to handle her husband’s work. Bali gave Surinder Rs 10,000 which started him off in production, which is why they still acknowledge ‘Geeta Aunty’ in the title of all their movies.

I realised if you’re a comedic actor like Steve Martin, Peter Sellers, Walter Matthau or Jack Lemmon, you can be ageless, says Anil Kapoor

Those were halcyon days and Boney, the family historian, remembers them in detail. The birthday parties where the best child dancer would get a prize of Rs 2 from Prithviraj Kapoor. The days learning to drive thanks to Raj Kapoor’s daughter Rima at their Loni farm near Pune. The day he, Anil and Shammi Kapoor’s son Mickey banged the star’s Chevrolet into a tree. “But Anil was always a stickler for work,” says Boney, recalling how he didn’t wash his face for two-three days when he played a young Shashi Kapoor in Tu Payal Main Geet in 1970 (the movie was released much later). Much later he even went to Khadakwasla to shoot with Raj Kapoor as a cadet in a film he was planning, Param Vir Chakra, which never got made.

AK vs AK director Vikramaditya Motwane believes his family is the anchor, allowing him to focus on his career and characters. “I would rather that people come to me and say why are you not doing hero roles than them telling me to play the father,” says Kapoor. He is also, like Amitabh Bachchan, enjoying attention from young directors who are writing roles specifically for him.

He’s glad the ‘chalta hai’ (easygoing) attitude in the industry has given way to greater professionalism. “Earlier we would write the script on the set, the choreographer would listen to the song on the set and then create steps. We would often get our own clothes,” he says, recalling how he used his own silver suit and red shirt for a key scene in Ram Lakhan (1989) and bought his own jackets for Woh 7 Din (1983) and Mr India (1987). The nature of fame was different too. Often he would be away on an outdoor shoot for a month and a film starring him would be a hit. “I wouldn’t even get to know,” he says, comparing it with the instant bouquets and brickbats which social media today ensures. “Everybody has an opinion about you now,” he says. 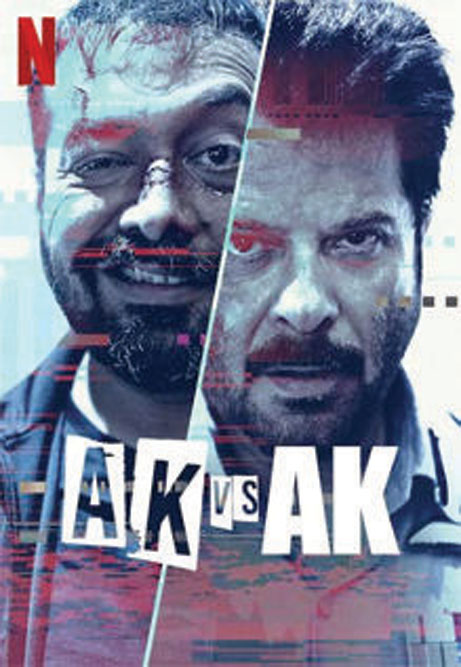 There is no Lakshman rekha any longer, he says. The industry and audience are less emotional, less considerate. His work ethic is unchanged though, says Motwane. He gets into the script details, makes his notes, does his rehearsals and yet asks the director for cues, for the simplest of explanations. In AK vs AK it was this: imagine the worst day of your life. The film, which was to be made with Shahid Kapoor earlier, has benefited from Anil Kapoor’s bigger footprint. Says Motwane, “He has much more to lose, and also more to prove, in terms of the older man being the hero.”

Remarkably, 40 years in the spotlight have not changed him much. He remains a people’s person, whether it is befriending a clueless young reporter on the film sets about the protocol around Amitabh Bachchan (“He doesn’t like to be watched while he is eating”) or admitting frankly that he was often Ghai’s fallback choice for a role. He has happily given much of the credit for blockbusters such as Beta (1992) and Mr India to the actresses, Madhuri Dixit and Sridevi. He has maintained a great friendship with his co-star on many films in the ’80s and ’90s, Jackie Shroff. Ask him about the fine eye for the aesthetic his children have and he credits it to his wife, Suneeta, who has largely kept herself aloof from cameras.

HIS TRADEMARK PHRASE, “Jhakkaas!”, first uttered in the utterly forgettable Yudh (1985), epitomises Kapoor. Ask him to explain its appeal and he says it suggests something fresh and lively. “I was on the Kapil Sharma show recently and I got so many people telling me they loved seeing me laugh and smile. They said seeing me happy makes them happy too.”

It’s a rare actor who can say that and it explains his staying power. Few actors have straddled the era of the angry young man, embodied by Bachchan, and the three Khans. From the pre-liberalisation era of Bachchan to the post-liberalisation era, he has been an actor who is as much at ease at the Toronto International Film Festival as he is at the IIFA awards. In 1989, in a detailed interview to a newsmagazine, he had said, “People are fed up of violence, they want peace.” He had said then he represented “the down-to-earth, uncorrupted, vulnerable, not angry young man”. Over 30 years later, he can still lay claim to the same everyman.