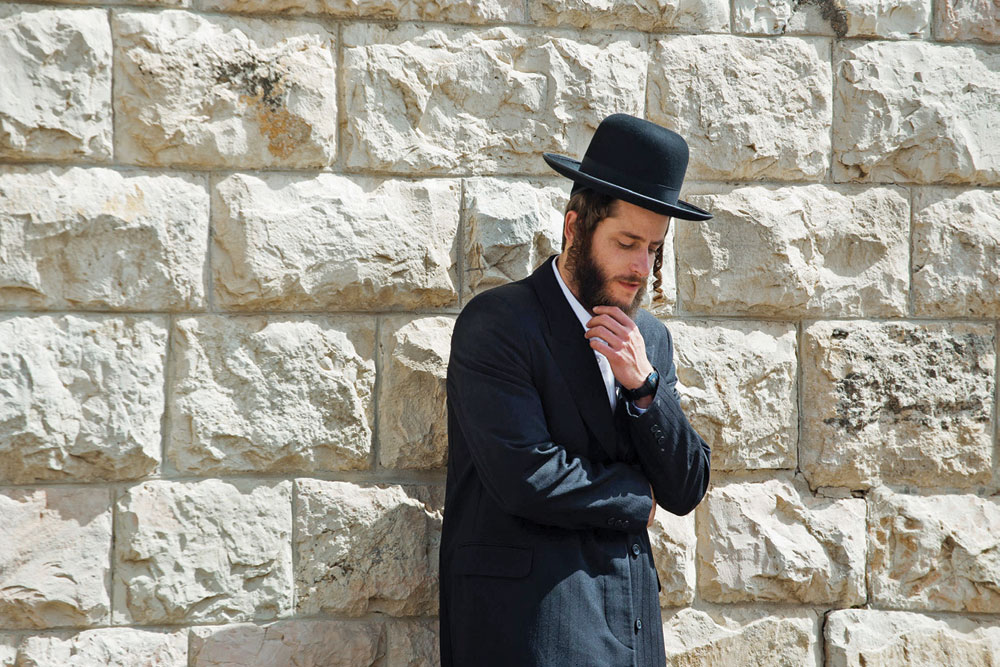 A scene from Shtisel


LIKE MANY PEOPLE worldwide (Netflix doesn’t give ratings), I’ve been hooked on Shtisel, an Israeli drama series about four generations of the Shtisel family living in contemporary Jerusalem. I’ve not been so drawn into a series since The Sopranos, fascinated by both, perhaps because they share the same hook: how do traditional values and societies, of which these give us an intimate insight, fit in with the modern world?

That’s about where the similarities end, given that The Sopranos is full of murder and mayhem, while the Shtisels are an ordinary family. Ordinary, that is if you are an Orthodox Haredi Jew.

Haredi Jews are a common sight in major cities in Europe and in New York, the men distinguished by their long coats, hats, beards and payots (side ringlets), the (married) women by their head coverings or wigs and modest clothing. The women somehow seem more modern than the men as they wear noticeably 20th century clothes, while the men’s are from an earlier era. It’s a group easy to recognise but about which most of us know very little as they form a closed society, living apart from others, who are referred to in the series as secularists, Zionists and Gentiles.

Shtisel presents some of the distinguishing features of this society in an accurate manner without comment. The clear separation of men and women outside family or certain public contexts, marriage at a young age and large families, respect for elders and for tradition, touching the mezuzah before crossing a threshold, and keeping strict dietary rules from kosher to saying a blessing before eating or drinking anything. The Haredi famously reject modern technology so there are jokes about having a kosher phone, an old ‘clam’ phone rather than a smart phone, while television and even car ownership are problematic. However, it’s said that many Haredim watched the series.

We are drawn in through the many engaging characters, beginning with Shulem Shtisel, a widower of 63, ‘father and educator’ being the description he wants on his tomb, rather than the matchmaker’s summary of him as someone who ‘eats and smokes’. He is always devout, a kindly patriarch with a strong sense of duty, but he sometimes pushes society’s restrictions to their limits, such as in his habit of finding widows to cook him traditional food. We meet a huge cast of characters including his mother, Malka Shtisel, who is a link with the old European world, as primarily a Yiddish speaker. Malka and her friend speak this form of German using its lovely expressive words, often amusingly abusive, which might be comparable to the legend of Punjabi in India. (No one mentions the Holocaust at any point.) She also provides much humour, such as her interpretation of game shows and soaps through her traditional values when she gets her first television and conversations with her friend, the elegant but bitchy Rabbi’s widow. Akiva Shtisel is a gentle young artist, indecisive especially about marriage but who wears his heart on his sleeve, rejecting a good match for ‘the widow Rothstein’ who leaves for London, unable to start again. Shulem’s daughter, Giti Weiss, who holds everything together when her husband abandons her and the children but who can’t cope with the birth of the next child, and their whole extended family, until her good heart carries her through.

There are many moments which stick in the mind.

In one, Akiva wins an art award so is invited to a ceremony where the dealer notes he doesn’t have to ask him to wear a jacket as the Haredi style of clothing never changes. Akiva and Shulem are the only Orthodox people present although the art dealer, an apostate from an orthodox family, arranges kosher food and translates their Hebrew into English for an American donor. Akiva slinks off as his father joins him on stage to start talking about how the Gentiles invented art because they didn’t have the Bible.

The series is notable for little touching and no kissing, let alone sex. We see inside bedrooms with their single beds, where the men wear their fringed garments under their pyjamas and both husbands and wives sleep in their head coverings. When Akiva has to share his father’s bedroom due to guests staying over, his father says a son cannot sleep in his (dead) mother’s bed.

It’s also interesting to note that no one is torn apart by being Orthodox, although schoolboys are forbidden to watch the Israeli Air Force flypast on Independence Day, as Haredis reject Zionism and are exempt from military service. Nor does the series suggest that traditions are to blame for anyone’s problems, instead suggesting that being Orthodox is empowering though one must reconcile one’s desires within the community. When Lippe Weiss, Giti’s husband, runs off with a Gentile in Argentina, she pretends all is well so he can be permitted re-entry to the family and to society. When Shulem’s family find him having lunch with yet another widow, he has to announce their engagement as such contact is forbidden. Akiva struggles to get the family to recognise his calling as an artist, an unusual profession for Haredim. ‘Times are changing’, says Akiva. ‘The Jew stays the same, and so does the sun’, says Shulem.

Romances form within the strict rules segregating male and female society with formal meetings in hotel lobbies set up through matchmakers after which their families decide whether to take matters forward. The series is more about love, mostly within the all-important extended family, including even the dead who reappear to the living, and the wider community.

ALTHOUGH INDIAN FILMS deal with romance in the extended family and the encounter of the modern and the traditional, it’s notable that they rarely deal with orthodox sections of society.

There is always a problem showing caste and community. The depiction of Muslims in Hindi movies is complex but here I’m considering only Hindu communities in Hindi films. After 1947, films mostly avoided any mention of caste. When names were given, they were mostly upper caste, whether Brahmins or Punjabi Khatris. Today, even small-town heroes have upper caste names, and high castes continue to dominate ‘Bollywood’.

Realistic cinema can’t avoid mentioning caste, and non-Hindi cinema is quite comfortable with it, so Ray’s Pather Panchali (1955) shows Apu’s family, the Roys, as priests, or Marwaris stereotypically, such as in Joi Baba Felunath (1979). A small handful of films mention caste or feature low castes, the standard rollcall including Acchut Kannya (1936), Sujata (1959), Ankur (1974), Bandit Queen (1994), Lagaan (2001), Aarakshan (2011), Fandry (2013), Masaan (2015), Sairat (2016), and Newton (2017). These films, which often centre on caste issues and clashes, are sets apart from mainstream cinema. The recently released Serious Men (2020), which features caste issues in a scientific community, has a joke about a low-caste man dying when he enters a first-class compartment as he’s told it’s for Brahmins.

Bollywood films may raise caste issues indirectly so Dabangg (2010) features Chulbul Pandey (Salman Khan), whose surname marks his high caste, while Rajjo’s (Sonakshi Sinha) caste is unclear. In Tanu Weds Manu (2011), Manu (Madhavan) and Tanu (Kangana) are Brahmins (Sharma and Trivedi) so no caste conflicts but in Tanu Weds Manu Returns (2015), Kusum (Kangana), the almost second wife, is a Sangwan, and portrayed as an unsophisticated hick.

Despite increasing mention of caste, how could one make a film about an orthodox community in India which wasn’t concerned with conflicts between it and other communities but about people who live within it? Would it be permitted by the censors? How could Hindi films or serials deal with orthodox Brahminical culture? Could they show people observing traditions and customs, which keep them apart from other sections of society?

When orthodoxy is featured, it is usually only as a problem, whether in Samskara (1970) (Kannada), which Ananthamurthy wrote from his now-classic novel, or Sadgati (1981), adapted from Premchand, a story of caste oppression, or Dharm (2007), where an orthodox Brahmin finds a child they have adopted is a Muslim.

We as outsiders know very little about these self-isolating societies but films/serials and literature allow us to see into them from many perspectives. But is the depiction of the interiority and realism of these societies unacceptable today? Would it even be screened, let alone watched? Yet, so much is about the way it is done. In literature, RK Narayan quietly depicts a Brahminical Mysore while SL Bhyrappa, despite his numerous national honours, has been more controversial, entering into fierce debates with other writers, including Ananthamurthy and Girish Karnad.

In Shtisel, we see orthodox people who are basically decent, but the series is apolitical and avoids issues of gender identity, its focus being on an autonomous and closed world. It is also excellent television, its compelling stories skilfully intercut, its believable and complex characters performed by outstanding actors. Would a series like this be possible in India today? Should it be?